Gyrfalcon is the largest bird of the falcon family. This commanding bird is a great beauty and is a grand predator. The bird is known for its calculative preying method.

Wingspan : The bird has a full wingspan of 4ft.

Color : They are mostly grey, white and black. The light gyrfalcons are usually completely white, may be with some tiny black spots on their crowns, sides, and backs. There are black colored bars on their longest wing. They have grey streaks on their underneath sides of the body.

Features : These birds have dark eyes. Their wings are big and pointed. Their beaks are typically notched like falcons. 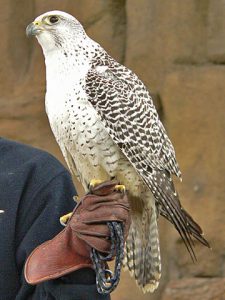 Gyrfalcon is a very interesting and elegant bird to observe.

Gyrfalcons are huge carnivorous birds. They prey on rabbits, small birds, many kinds of mammals, and voles. They even prey on large birds like waterfowl and ptarmigan.

These birds tend to inhabit wide and open regions in winters. In general they prefer rocky coastal areas, rivers with rock walls and slopes, rocky mountains and areas with open and stiff cliffs.

Gyrfalcons are almost apex predators in their adulthood. Young and newly born ones are often preyed up on by eagles, foxes and owls. Fully grown adult gyrfalcons rarely have any predator. Only Golden eagles prey on the adult ones. It is observed that the greatest threat to this species of bird is human being. 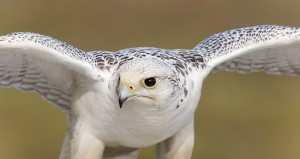 Gyrfalcons breed from the age as early as 2years. They use abandoned nests of other such huge birds. The females lay around 3-5 eggs. Males are in-charge of gathering the food and patrol around to protect the all the while the females incubate. Incubation period lasts for approximately 35-38 days.

After hatching out the young birds stay with their parents in the nest for 45-50 days. Even after the young ones leave the nest they still remain dependent on the parent birds for food. These new born birds start learning flying almost after 50 days of age.

Gyrfalcons are not too fond of migrating, but they do so only during scarcity of foods. The ones that inhabit the Arctic region fly down southwards. Sometimes they fly southwards as far as to Germany.

This species has been authentically listed as the least concerned by IUCN.

Gyrfalcon is a very interesting species of bird to observe. Here are some interesting facts about this bird.

Here are some awesome images of Gyrfalcon: 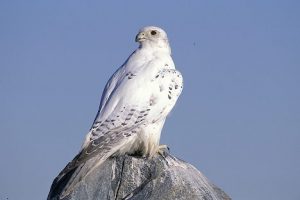 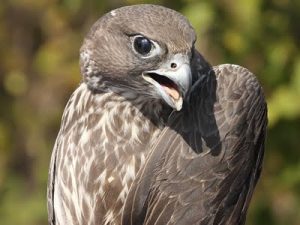 One response to “Gyrfalcon”