Black caimans found in South America are the fourth largest extant member of the crocodile family. These robust reptiles were almost hunted to extinction for their hide, but conservation efforts over the past few decades have ensured that their population is now safe and thriving. There is an estimated population of 25,000 to 50,000 individuals in the wild. 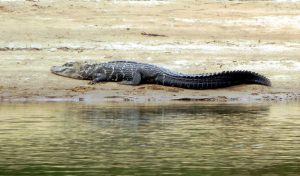 Color: True to their name, these reptiles have a dark to almost black body color. There is a grey to brown band on the lower jaw. Juveniles have a more varied coloration with a white to yellow band on their sides that they retain for some time even after reaching adulthood.

Black caimans occur in Brazil, Bolivia, Colombia, Peru, Ecuador, Guyana, and Venezuela. French Guiana is host to the most number of these reptiles. 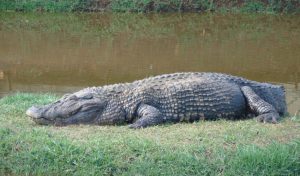 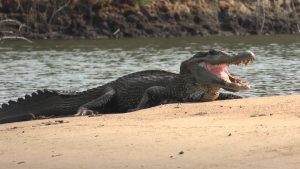 Black caimans are the apex predator in their habitat. They are capable of taking any animal within their range, although their diet usually consists of fishes like piranha, perch, and catfish. They may also feed on turtles, birds, and mammals like deer and capybara. Larger individuals can also take down tapirs and anacondas. They swallow their prey whole as their teeth do not allow them to rip off flesh. In case of larger prey, they let the flesh rot for a few days before biting off chunks from it.

They breed during the dry season. Females construct a nest mound with a chamber for the eggs. Clutches typically comprise between 30 and 60 eggs but can have up to 65. They hatch after around two to three months. Females help the hatchlings to emerge from their eggs by gently cracking them open with her teeth.

Although independent by nature, the hatchlings are looked after by the mother. Very few survive to adulthood. Like other caimans, they reach sexual maturity between the ages of four and ten years. 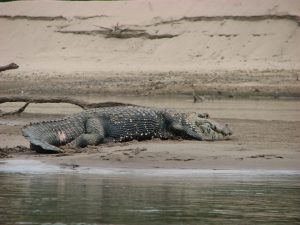 Black caimans have a lifespan of 50 to 80 years.

They make a noise that resembles rumbling thunder. Hatchlings chirp from inside the egg to let their mother know they are ready to emerge.

Eggs and hatchlings become vulnerable to predators when the mother goes off to hunt. Birds like vultures and herons, snakes, and mammals like the South American coatis and jaguars are known predators of eggs and juveniles. Adult black caimans do not have any natural predators.

The IUCN lists the black caiman under their ‘Least Concern’ category. 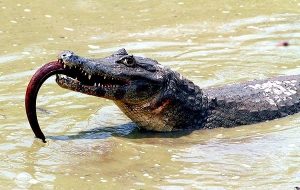 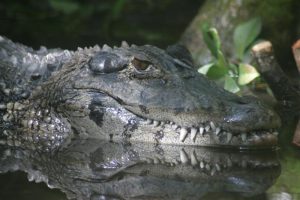