The European Bison, also called the ‘Wisent’, is the largest land mammal of the continent of Europe. Often confused with the American Bison, the population of the wisents has got dramatically low in the past few decades, which is mainly because of human predation. In 1996, IUCN declared this species as ‘endangered’. However, with the gradual increase in population, their status has been changed to ‘vulnerable’. 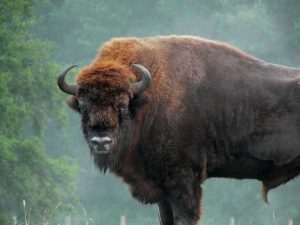 Body Type: This herbivore has a thickset body shape, with a pronounced shoulder hump and a short neck.

Coat: They have a dense coat, which is dark to golden brown in color.

Mane: The mane is long and is distributed over the forehead and underneath the neck.

Tail: The tail is fringed and long, measuring between 30 and 80 cm.

Horns: Both the sexes have horns projecting outwards, and then curving upwards.

The primitive range of the wisent encompassed almost entire Europe, including southern England, and parts of Russia; however, most populations were eradicated by hunting. In the past, especially in the Middle Ages, they were mostly hunted for hide, and to make drinking horns. At present, the range of the European bison has become very restricted. Fortunately, the breed could effectively be kept alive by captive breeding, with the population increasing slowly. Since 1980, 24 herds of these bison have been reintroduced into the wild. 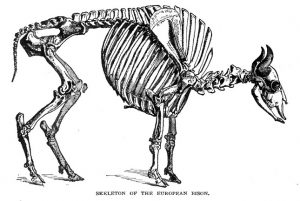 These bison had two subspecies, both of which are currently extinct. They were:

In the wild, the wisents do not live longer than 14 to 16 years. However, in captivity, the males have been seen to live for up to 20 years, while the females live longer – up to 28 years. 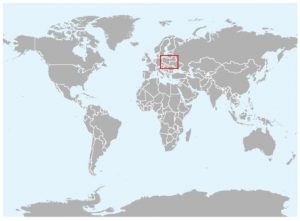 They are native to the regions of Bialowiesza (Poland) and Western Caucasus. They have been reintroduced to Belarus, Lithuania, Poland, Russian Federation, and Ukraine, and introduced for the first time in Kyrgyzstan.

Habitat: Where do European Bison Live

In the wild, the wisents inhabit the deciduous and mixed forests with open grasslands and low-lying vegetation. However, with active conservation programs, a large percentage of these animals live in wildlife sanctuaries and national parks in Europe.

These animals move very slowly. During summer months, the European bison would spend 60% of their daily activity to forage and eat, 30% to rest, and 10% on hovering around the forest without feeding. However, during winter, these bison would typically supplement their feeding with hay spending around half the time in feeding (30%). They would roam around the forests more during this time, around 60%, which is primarily for the purpose of basking and warming up. Thus, the everyday activity of these animals is almost similar to most other ruminants with foraging, alternating with rumination and resting.

These are herd animals, and would live in both mixed and solely male groups. They are primarily social animals with their herds typically including mixed groups containing calves, cows, young bison between 2 and 3 years of age, as also adult bulls or groups of bulls. In an average, there are between 8 and 13 animals in each group. However, the number of heads varies, depending upon the environment. 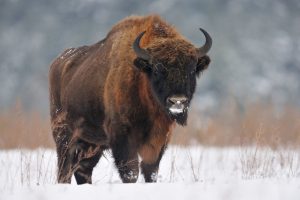 During foraging, though, they can even be seen in larger groups of up to 23 individuals. Groups of bulls are mostly small comprising of around 2 animals. Younger individuals frequently move in groups. However, the individuals in one single group are not necessarily units of a single family, and the numbers may often vary, depending mostly upon seasonal or behavioral factors including calving, joining of new bulls in the mating season, etc. During winter, the most of the bison would gather together in feeding sites, forming large mixed assemblages.

Diet: What Do European Bison Eat

European Bison are completely herbivorous and thrive on simple foods including grass and sedges, which are their primary foods. They will also eat tree leaves and barks, acorns, lichens, mosses, and shrubs and shrubberies from low-lying vegetation. European bison must drink water every day.

They are polygamous. The mating season of these bison falls between August and October. During this time, the males would join the female herds, competing for mating with the most receptive females. The younger bulls, between 4 and 6 years of age, face a tough opposition by the older bulls when it comes to mating, even though the former are sexually matured.

Just like bachelor male groups, groups are also formed by females that occupy a vast home range of up to 100 sq km, which is led by a dominant cow. Once a bull chooses its partner, it would attempt to separate the cow from the rest of the group. This behavior is mostly associated with sexual jealousy, so as to block the access of the other bulls to the specific female. Males might engage in vigorous clashes during this time.

The gestation period in the females is 264 days, and in most cases, they give birth to one calf at a time, but rarely 2 calves, typically between May and July.

On average, male calves weigh 27.6 kg on an average during birth, while the females are lighter at 24.4 kg. While the male European bison reach the age of sexual maturity by around 2 years, while the females would attain it at 3. 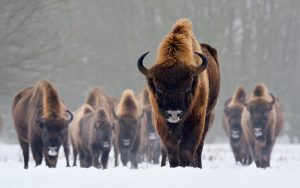 Interestingly, the European Bison do not have any natural predators, except for a few scattered 19th-century reports of bear and wolf predations.

Though they are not yet endangered, but with the rapid decline in population, they have been enlisted under the ‘vulnerable’ (‘VU’) category of the IUCN 3.1. 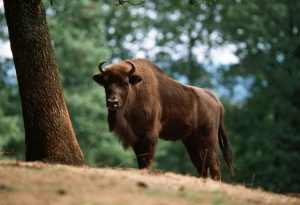