The Spectacled Bear is a South American bear that is the last living species of native bear in the continent. It is also the last member belonging to the short-faced bear subfamily. There has been very little information about the spectacled bears. They are extremely shy by nature, and avoid contact with humans. This makes it hard for researches to find them for study.

Body: They have a short and muscular neck

Fur/hair/coat: Their fur is mostly black. However, it dark red to brownish hues are also seen on the upper-parts. At times, they also bear white to pale yellow (cream) markings around their muzzle, as also around the regions of their neck and chest.

Feet: Their legs are short but strong. They would walk on the soles of their feet. Their front legs are longer than their rear legs.

Eyes: Cream to pale white markings is common around their eyes. 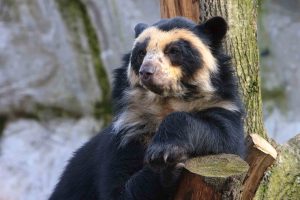 The spectacled bear may live for up to 39 years in captivity. The data for the wild population is not known.

Their bio-geographic realm is neotropical. Their range states stretch across Venezuela, Argentina, Colombia, Ecuador, Peru and Bolivia. They are found throughout the Andes mountain range in South America, from western Venezuela to the northwest of Argentina. 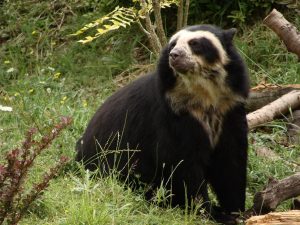 Habitat: Where do Spectacled Bears live

Primarily, the spectacled bears dwell throughout the cloud forests (also known as ‘Andean forest’) and high Andean moorland (páramo’). However, they have been seen in widely differing habitats starting from the rain forests, to the steppe lands, to even the coastal deserts. 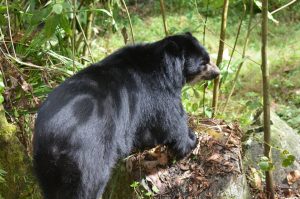 The currently estimated population in most of their inhabited areas has gone down. A total estimate for the Northern Andes (excluding most parts of Peru, Bolivia and northern Argentina) comprises between 6,000 and 10,000 individuals.

The spectacled bears are introvert, shy, solitary animals, and seldom live together with other individuals, except for the cubs living with their mothers. Mature individuals are generally seen together only during mating season. Very occasionally they have been seen feeding in small groups. Though solitary by choice, relatively high concentration of bears can be found in forests where there is abundance of their favorite food items. They enjoy dwelling across the isolated cloud forests on the slopes of the South America mountain range of Andes, and are able to climb high altitudes, which means, as high as 14,000 feet (4,300 meters).

When hungry or food is not abundant in the higher altitudes, they would frequently climb down in search of food. Since these bears live in the tropical climates of South America, they do not hibernate during winter, and are active round the year.

This species is a true arboreal that would use their long, sharp front claws to climb up the trees and forage for food. They are primarily nocturnal and chiefly vegetarian by food habit. Only about 5% of their food consists of meat. These animals are expert climbers. Evidences suggest that, they would even sit high atop on tree branches on platform, which they make of broken branches, and wait for fruits to ripe, to feed and also to sleep. 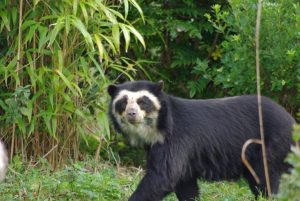 Spectacled Bear in the Wild

Diet: What Do Spectacled Bears Eat

Like other bears, these bears are omnivore. However, natural vegetation has made up the majority of the diet. Different kinds of harvesting fruits, berries, cacti, and honey are the regular items of their diet list. They mostly live on fruits of plants especially those that belong to the Bromeliad family. At times, their diet is supplemented with meat of small birds, insects, rodents, and even small cows, which makes them the largest carnivores in South America. 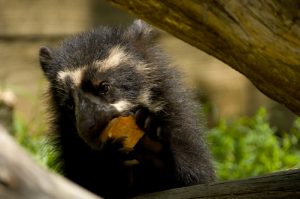 The spectacled bears do not have any specific season top mate. It may occur at different times of the year. The gestation period of the female is 5.5 to 8.5 months. Between December and February, they generally give birth to 1 to 3 cubs in an out-of-the-way, protected den. However, almost nothing could be known about how the females choose their den site. 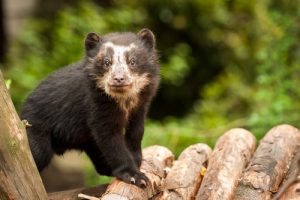 The juveniles weigh 10 to 18 ounces (284 to 510 grams) at birth, and open their eyes only after they are around 42 days old. The baby spectacled bears may stay with the female for up to a year. However, it is assumed that, it is a nest made under rocks and roots of trees. The cubs leave the den from the company of their mothers as they are around three months old. It has been noticed that, the babies are able to ride on the mother’s back, or the mother can carry the cubs by clutching to their chests with a front paw. The females can then run on three legs or would even walk using the two hind legs. 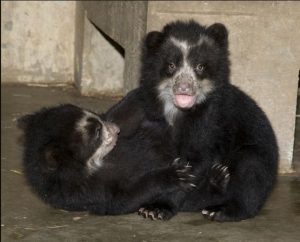 The only known predators of the spectacled bear cubs include pumas (Puma concolor), jaguars (Panthera onca), and other adult male bears. 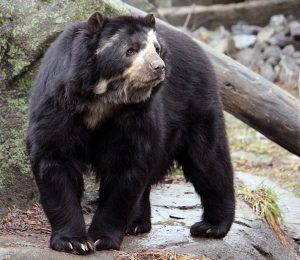 The Spectacled Bear is not a threatened species as of now, however, the IUCN 3.1 has categorized them under the ‘VU’ (Vulnerable) species list.