Dwarf caimans found in South America are the smallest crocodilian belonging to the alligator family. It is one of the two members in its genus, the other being the smooth-fronted caiman. They are also known as the musky caiman, Cuvier’s caiman, and Cuvier’s dwarf caiman. 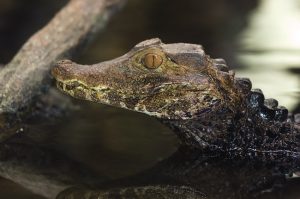 Color: These caimans have a reddish-brown body with an almost black back. There are spots on both the jaws while the tail has bands that extend up to the tip. Most of these caimans have brown eyes, but some individuals have golden-brown eyes.

Dentition: This species has four premaxillary teeth in their upper jaws, unlike most other caimans that have 5.

These reptiles inhabit lakes, ponds, streams, rivers, swamps, and marshes in grasslands, forests, in addition to the rainforests of South America. 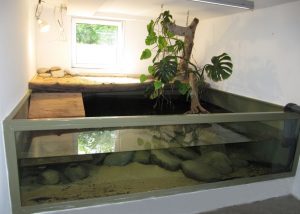 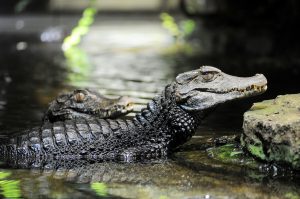 Adult dwarf caimans eat crabs, shrimps, fishes, amphibians, birds, small mammals, and mollusks. Juveniles do not rely as much on fish but do feed on frogs, tadpoles, crustaceans, and insects.

Dwarf caimans do not have any specific breeding season and eggs may be laid during any time of the year. The female builds a nest out of mud and vegetation in a cryptic location and lays her clutch in there. Clutches consist of 10-25 eggs, which are then incubated for around 90 days. The incubation temperature determines the sex of the hatchling. When they start to hatch, the hatchlings call out from inside the nest, and the mother comes to get them out of it. 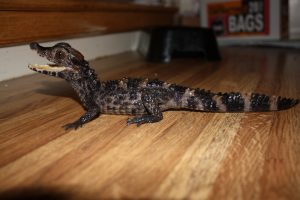 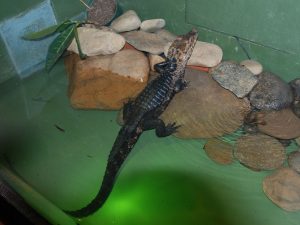 The newly-hatched have a layer of mucus which hinders them from going into the water until its dry. They stay with their mother for some weeks before they go their own ways. They reach sexual maturity by the time they are around eight years old.

In the wild, dwarf caimans live for around 20-40 years, while in captivity they can live up to 60 years.

They communicate through sounds, motions, postures, touch, among others. During the mating season, they emit a grunt-like roar to put across their readiness to mate. 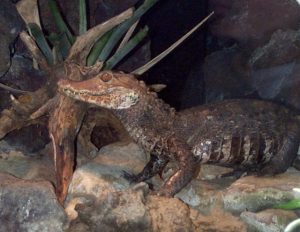 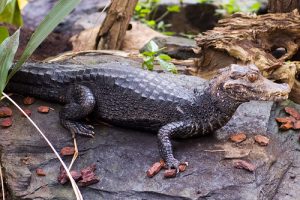 Rodents, raccoons, coatis, and opossums prey on eggs by getting into the protective mound. Juveniles are often taken by raptors, herons, and other carnivores. Adults, with their protective armor, are only taken by green anacondas, large boa constrictors, and jaguars.

The International Union for Conservation of Nature (IUCN) categorizes these reptiles under their ‘Least Concern’ category.

Can you keep a dwarf caiman as pets

Owing to their size, they are routinely kept as pets. However, it is not recommended as they can be dangerously volatile, and adult dwarf caimans can deliver an excruciating bite. 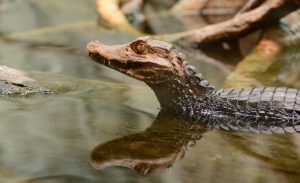