The dark water bird or more so the devil bird, Anhinga is a cormorant-like bird mostly found in the warmer areas of America. Its swimming habits and broad tail have earned it the name of Water Turkey. Many also refer to it as the snake-bird owing to its long neck that sticks out of the water.

The Anhingas can spend long periods of time under water searching for prey; their feathers are not waterproof and hence making them barely buoyant and allowing it to dive easily in to water.

This bird belongs to the darter family of birds.

The Anhinga is a large, dark water bird that is often compared to the Double-crested cormorant on account of its size and behavior. However, the Anhinga can be differentiated from the latter species due its wide tail and pointed bill that is contrary to the hook-tipped bill of the cormorant. 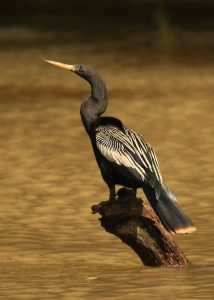 Size: This large bird roughly measures about 89 centimeters in length.

Weight: These birds can weigh up to 1.22 kilograms.

Wingspan: Its wingspan is approximately 3.7 feet.

Color: The Anhinga is identified by silvery white patches that are visible on the upper back of its body and wings.

The overall body of the Anhinga is a brilliant glossy black green color; though the wings and tail appear to be a glossy black blue. Its tail tips seem to be covered with white feathers.

The female is identified to have a more brownish back. Females also tend to have a pale gray-buff; or if not their head, neck and upper chest are light brown in color. Apart from this, the female looks very much similar to the male.

Juveniles are usually brown in color and bear resemblance to adult females.

Feet: Its webbed feet appear to be yellow in color.

Bill: The long, sharp and pointed bill of this bird is nearly twice the length of its head.

Neck: It has a long and thin neck.

These birds are known to inhabit rivers, swamps and ponds. It prefers warm, shallow, slow-moving and sheltered waters.

It is important to note that these birds are never found near freshwater except during periods of severe drought. 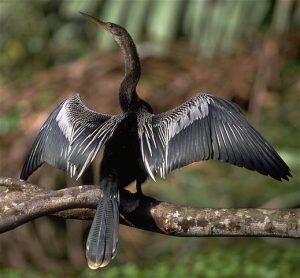 A.a.anhinga: This variety can be mostly found in the east of the Andes in South America and also the islands of Trinidad and Tobago.

A.a.leucogaster: The subspecies can be traced in southern United States, Cuba, Mexico and Grenada.

This species of birds are common to South America, between the regions of southeastern United States up to Argentina, and in certain warmer regions of North America.

Anhingas are migratory bird. As such, kettles of anhingas have been observed migrating with other birds towards the equator during the winter time. However, we must note that the migration of these birds depends on the temperature and the amount of warm sunshine.

In the United States, these birds have been observed to be migrating as far north as the states of Pennsylvania and Wisconsin.

The diet of these birds chiefly comprise of fish. Although, the Anhinga also prefers to eat crustacean and invertebrates including water snakes, tadpoles and baby alligators.

The hunting style of these birds is characterized by side spearing the fish with a strong and speedy thrust of their bill. These birds are known to stalk their prey.

The male Anhinga takes responsibility of collecting the raw materials required to build the nest; it is the female that actually builds the nest. The male starts building the nest even before it has a mate. The nest is constructed by piling large sticks and green materials in tree branches or forks. It is thereafter lined with soft green twigs, willow leave and catkins. 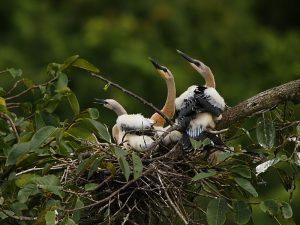 The nest is usually found in a tree that is in proximity to water.

The female Anhinga will lay approximately 3-5 eggs. These eggs are light blue with a chalky coating.

The eggs are ready to hatch after an incubation period that lasts up to three to four weeks; approximately a month. Young fledge with 14-21 days after their birth although they stick with the adults for some more time.

This bird forages underwater and it does so by either by diving or plunging head underwater while swimming. The Anhinga hunts in small groups.

One may often spot this bird trying to dry out its wings and feathers as it displays a semicircular full-spread shape of the tail and feathers. The bird will perch for a log time with its wings spread out to facilitate the drying process.

In fact, the Anhinga is also called the Snake-Bird on account of its habit of swimming with its head and long neck sticking out of the water.

Its reduced buoyancy allows this bird to actually swim much lower in the water as compared to many other birds. The dense bones and wet feathers of the Anhinga are responsible for it being barely buoyant.

Flight: This bird can soar up high often achieving startling altitudes of several thousand feet. It is an excellent flier and can cover long distances without even flapping its wings.

In flight its wings are perfectly flat and straight and neck outstretched. It is a beautiful sight to observe the bird soaring high.

The anhinga is popularly referred to as the snake-bird on account of its long snake like neck that it draws out above the water surface while swimming; in this position its head appears like a snake ready to strike.

Other names of this bird include Water Turkey, Darter and American Darter.

Its very name ‘anhinga’  means devil bird or snake-bird and is derived from the Brazilian Tupi language.

The vertebrae in the Anhinga’s neck are designed in such a way so as to allow it to thrust powerful stabs with their bill in order to spear fish.

Young anhingas swim even before they can fly!

Anhinga is not an endangered species; it is enlisted as least concern since populations seem stable.

In the United States, the bird is protected under the Migratory Bird Treaty Act of 1918.

Take a look at some pictures of the marvelous Anhinga birds! 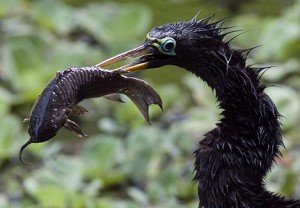 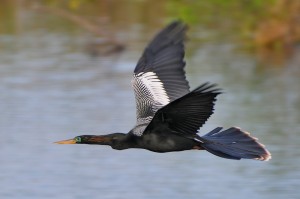