Magnificent Frigate Birds are large dark colored birds. They have reputation for stealing foods from other sea birds. These birds are believed to be closely related to Pelicans. They are large species of sea birds having large wing span.

The Magnificent Frigate Bird has a host of other names.

Magnificent Frigate birds are large sized. Let us take a look at their other physical features.

Color: The color of their body is black. The feathers are glossed green on the head, purple on the upper wings and back for the males. The females have brownish-black plumage with a white patch across the breast and upper belly. The females have a blue eye ring. The legs are reddish.

Size: They are about three feet in size.

Weight: The weight of the Magnificent Frigate Birds varies from 1000 grams to 1900 grams.

Wings: The wingspan of this species of birds is around seven feet. The wings are pointed and long with pronounced bend in the middle. The females have three white lines under the wing and a diagonal white of line on the upper area of the wing. The wings of the Magnificent Frigate Birds are exceptionally long.

Tail: The tail is long and branched.

Bill: The bill is long and hooked.

Neck: The neck is short. There is a bare patch of skin on the lower portion of the neck which is known as gular sac. This is a trademark feature of the males. The females do not have any gular sac. 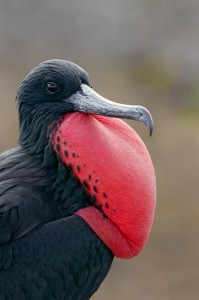 Feet: It has short legs and very small feet.

The Magnificent Frigate Bird is found in the Caribbean Islands as well as on the coasts of the Atlantic and Pacific Oceans.

Magnificent Frigate Birds are not migratory birds. Though, individual birds roam around widely. They are typically found in warmer waters.

Magnificent Frigate Bird feeds on fish, sqid, turtles, crabs, jellyfish and offal. They feed on eggs and chicks of other sea birds.

Magnificent Frigate Birds usually glides in the air. They flight right above the surface of the water. The bird has perfect body, adapted to energetic flights, with irregular and deep wing beats, moving with its long uneven tail. It performs maintained flight, high in the air, with arched wings, raising and gliding gracefully. In flight, its shape resembles that of raptor. 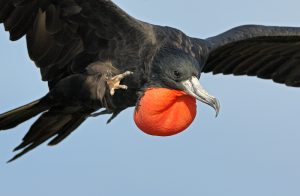 Frigate birds have few natural predators with humans being the main. Rats, stoats and domestic cats are some of the predators of the Magnificent Frigate birds. their eggs are being hunted by these animals.

The males inflate their red colored throat pouches to attract the females. It takes around twenty five minutes to blow up their red balloons. They do it by sucking air into the wrinkled red pouches on their throats. Then they vibrate their wings and clatter their bills. The females fly overhead and keep a watch on them. Finally, each one chooses a male as her mate. The pairs build their flat nests of twigs, sticks, and grasses right on the spots where the males were showing off. The males often steal nest material from each other or from other seabirds nesting nearby. The birds are noisy at the nest site, although they are quiet at sea.

The breeding period of this species of birds are exceptionally long. The pairs build their nests of twigs, sticks, and grasses right on the spots where the males were showing off. The birds make lots of noise at the nest site, although they are calm at sea. Each female lays just one egg. For about two months, the parents take turns sitting on the egg. Incubation lasts for seven weeks. 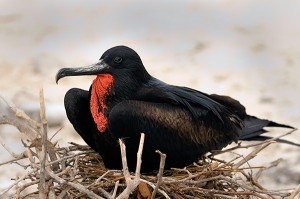 The newbies are fed by their mothers till they reach the age of one year. The young bird is helpless when it is hatched. But soon the chick starts pleading loudly to be fed. It eats food that the parents reiterate. After the chick crosses three months the father leaves. Young frigate birds practice catching food on the wing by dropping feathers and seaweed. It takes them long time to learn how to feed themselves. Females breed every other year, and young birds are ready to breed by the age of seven.

The lifespan of Magnificent Frigate birds is expected to be 30 years.

Magnificent Frigate Birds are listed in the category of “least concern” by the IUCN.

Here are some of the interesting facts of this huge dark colored bird.

Here are some of the spectacular pictures of the Magnificent Frigate Bird. 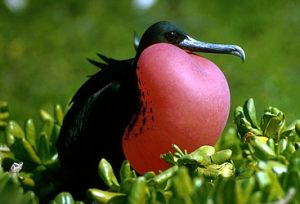 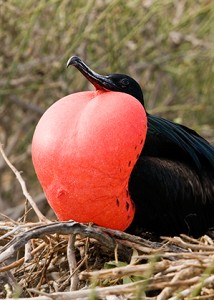 One response to “Magnificent Frigate Bird”