The Pied billed Grebe is small, duck-like water bird that is a wondrous species to observe and study. These birds are native to North America,

It belongs to grebe family of water birds.

The pied billed grebe is small, duck – like water bird. Males and females look alike. Juveniles also have the same kind of plumage as those of adults. 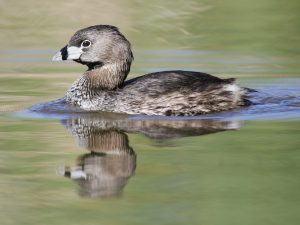 Color: The pied billed grebe is generally gray or brown in color. Its under parts have a lighter tone of color.

Bill: It has a thick, short and blunt bill. During summers its bill gets encircled by a broad black band; thus the name.

It is rare to hear the call of the pied billed grebe, except during their breeding season. The call however, is quite loud and cuckoo – like including sounds such as ‘cuck, cuck, cow-cow-cow, cow-ah, cow-ah’.

The pied billed grebe breeds on ponds, marshes and lakes situated at low elevation areas.  It nests in areas with dense emergent vegetation and one that is typically in proximity to open water.

The winter season witnesses these water birds on both fresh and salt water, though with a higher preference for fresh water.

There is more possibility of spotting these birds in mountain lakes at higher elevations, during the migrating period.

Their range is widespread and cover much of south – central Canada, whole of United States, the Caribbean, Central America and temperate South America.

These birds remain resident throughout the year in much of their range; however, those native to areas with extreme winters opt to migrate to warmer regions. It is rare for pied billed grebes to cover huge distances over migration but it is noted to be a rare visitant in Europe a number of times. 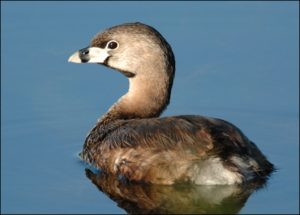 The pied billed grebe’s diet mainly comprises of aquatic invertebrates, amphibians and small fish. Typical to all grebes, the pied billed grebe eat their own feathers and also feed it to their young; it is believed that doing so proves to be beneficial for their digestion, while also preventing injuries from the consumption of small bones.

Both the male and the female participate in building the nest. The nest is somewhat like an open bowl prepared using a dense plant material; it is anchored to emergent or floating vegetation.

There are about 5 to 7 eggs laid by the female in the nest. Both parents are involved in the incubation of these eggs. The incubation period lasts for approximately 23 days.

These eggs are covered or concealed with vegetation when the parents leave the nest. As soon as they hatch, the young grebes can swim on their own though not that well as adults. The young ones are fed by both the parents who also tend to carry them on their backs while swimming underwater.

This particular species of grebe is far less social as compared to its other relatives. It is rare to spot pied billed grebes in flocks.

At the slightest disturbance this water bird will dive headfirst underwater! The sink their entire portion of the body under water, only exposing their heads.

Their courtship displays include a lot of calling by both males and females, sometimes even in a duet form.

The brown plumage or feather covering is one of the most basic adaptations of these birds, allowing them to camouflage themselves among marsh vegetation.

Pied billed grebes have a special oil gland often situated at the base of their tail. These birds preen their feathers with the secretion from the gland, thereby turning their feathers waterproof.

The cone-dense retinas of their eyes mark for yet another interesting adaptation of these water birds. It allows them to locate prey underwater.

Let us take a look at some fun facts about this bird.

Pied billed are innocently sweet birds that prefer to dive under water, if threatened despite the fact that it can fly; these birds are rarely seen in flight.

These birds do not have webbed feet like those of the duck; rather its toes are lobed.

Some of the popular folk names of pied billed grebes include ‘water witch’ and ‘hell –  diver’.

Pied billed grebes have a lifespan of approximately 10 – 12 years.

The pied billed grebe is not an endangered species.

Take a look at some pictures of this wonderful species, namely the pied billed grebes. 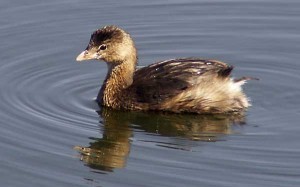 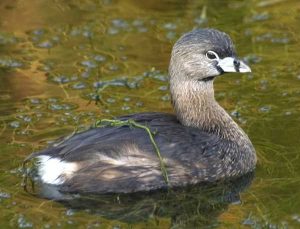 One response to “Pied Billed Grebe”