The Atlantic Puffin (also known as the Common Puffin) is one of the easily-recognizable birds that dwell in the waters and cliff-tops of the Atlantic Ocean. They are known for their strange coloration and interesting lifestyle, and are found in very large flocks, especially during the warmer months, when it’s time for them to breed. 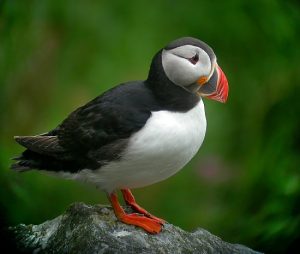 Physical Description: How is their Appearance

Plumage/Feather Colors: Plumage has somewhat penguin-like color pattern. Crown, forehead, nape, wings and tail feathers are glossy pitch black. Around the neck and throat, there is a wide black collar.

Head: On both sides of the head, there is a pale grey and broad lozenge-shaped area, tapering to a point and meeting behind its neck.

Eyes: The head is shaped such that it creates two folds from the eye to each of the patches.

Bills/Beaks: Beaks are parrot-like, but much shorter and tapered, and deep orange in color.

Tail: The tail is short with a blunt end.

These birds have a long life. The average lifespan of in the wild is 383 months or almost 31 years, while the minimum lifespan is 20 years, the maximum recorded longevity is 33.8 years. 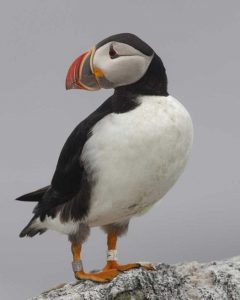 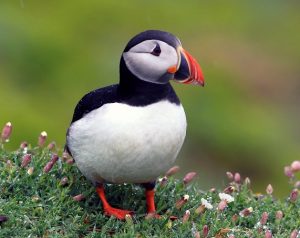 As the name suggests, the Atlantic puffins are spread along the coast of the Atlantic Ocean, from the Canadian Maritimes south to Maine. The bird is also found in Northern Europe. However, migration takes place during winter months, when they move far offshore in deep ocean waters.

Habitat: Where Do Atlantic Puffins Live 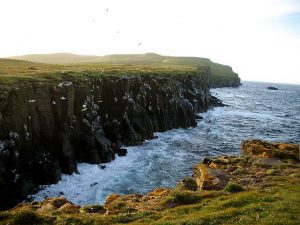 Divided only by differences in size, the Atlantic Puffins have 3 subspecies:

The length of their body, wings and beak all increase at higher latitudes. 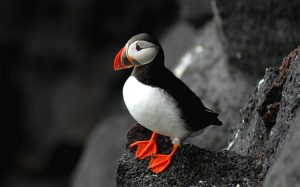 The puffins are colonial birds, and highly sociable creatures like most of the other birds from the Auk family. They primarily live on cliff tops’ grassy fields together in large colonies of up to 2 million individuals. Flocking together, they voice gruff calls that sound somewhat like ‘arrr-uh’.

Not just on land, even when they are out in the waters, they ensure that they flock out in large groups forming ‘rafts’ so as to stay protected from various predators. Though these birds are quite agile when in the air, their skills are at their best when in water. They are excellent swimmers, and would usually forage at around 50-60 feet of surface. However, they can also dive to about 200 feet, holding their breath for up to 2 minutes. Though, an average dive usually lasts for about 20 seconds.

Atlantic Puffins swim by flapping their wings, which looks very similar to flying, while they use their feet to steer forward. When not swimming, they rest on the waves. They have an extraordinary circulatory system in their feet, helping them cope with cold temperatures.

In the winter season, the birds spend most of their time foraging in the sea and would even go many miles away from land, after which they would return back to their own cliffs during the next climate change (in the summer months) for breeding. This makes it difficult for the researchers to stay updated about their status. Upon their return, these birds would often make ‘comical’ displays, including ritualized walking around the entrance of their burrows, knocking the bill, etc. 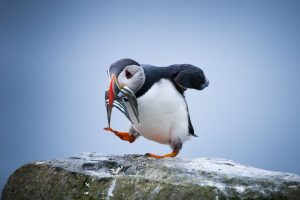 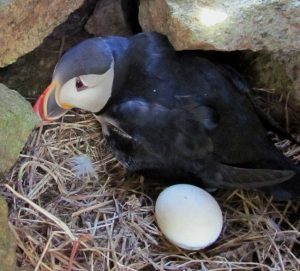 Diet: What Do Atlantic Puffins Eat

These birds are carnivores, and mostly thrive on fish and crustaceans. The food that they bring to their nestlings is primarily small fish, especially herring, capelin, sand lance, cods, eels (like sand eels), etc. Crustaceans may include euphausiid shrimp, mysids, copepods, as well as mollusks and marine worms.

The digestive system of the puffins is such that, they can rapidly digest foods. They take about 6 hours to digest a sand eel. However, not much is known about the winter diets of the adults.

During the mating season, the colors on the bills of the puffins, which faded in the winter months, start to brighten. Researchers believe that, this helps the birds find their mates. The mating season begins in the springtime and continues till summer.

The puffins, who spend the maximum time of the year in the seas, return to land prior to mating. Once the come back to land, the pairs reunite within the colony. Some couples display a mating ritual termed as ‘billing’. During billing, the couple would rub each other’s beaks together during or prior to mating. This act often draws an excited crowd of other puffins to come and watch them play. 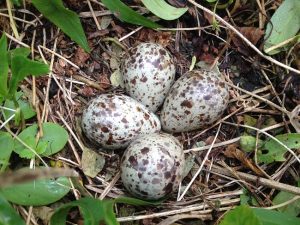 These birds either use old or deserted burrows (like rabbit burrows), or make new ones, which they built about 3 feet in rocky cliffs, and is made either between the rocks, or in the soil. Often, a particular couple will return to the same burrow every year. Inside the burrow, the parent birds build their nest made of seaweeds, grasses, and feathers. The female lays one single egg. Both the father and the mother would take turn incubating the egg for around 40 days.

As the chick hatch, the parents will take turn bringing fish from the sea to feed them several times a day. Atlantic puffins are able to carry several fish, approximately 10, in between their beaks at one time.

The hatchling stays inside the burrow until it attains the ability to fly. After about 45 days, the juvenile fledgling leaves the nest and spends time of almost 3-5 years at the sea learning about the places to find food, and the ways to choose mate. 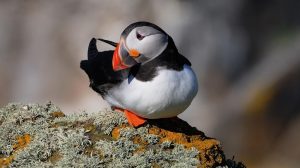 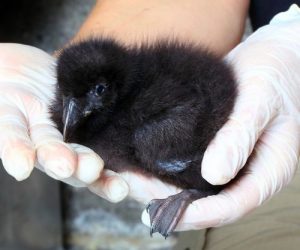 Gulls, hawks, eagles and foxes are the most common land predators of both the adult and the young Atlantic Puffin. Cats and dogs also prey upon them, when they are close to human habitation, while rats can also target their eggs. In the sea, large gulls and skuas are their common enemies. 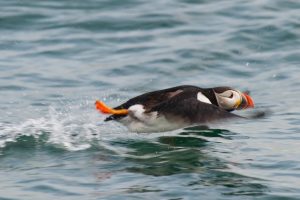 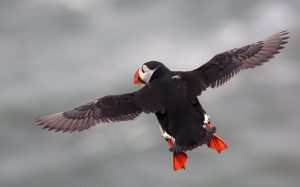 The Atlantic Puffin is not an endangered species as of now, however, with a gradual decline in population, they fall under the ‘threatened’ category. The IUCN 3.1 has categorized them under the ‘VU’ (Vulnerable) species list. 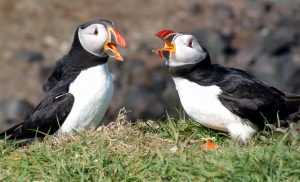