The Tufted Totmouse (plural: tufted titmice) is a common North American songbird that are only native to the Nearctic region of the country. Their sing in an echoing voice and is related to the chickadees. They often readily get enticed to bird feeders, where they usually come to collect sunflower seeds offered to them. These birds are steadily pushing off towards the northern part of the country. 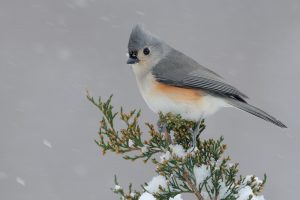 Weight: They weight around 18–26 gram, while their average mass is 21 gram.

Fur/hair/coat: The underside is white, while they have rusty-brown sides and gray backs, with a pointed crest on the head, and a long, flat tail.

Bills/beaks: Bills are short but stout and hardy.

Feet: Gray to brownish gray feet with a good grip to sit on branches of trees.

Eyes: Eyes are large, dark and round.

Sexual dimorphism: There is no gender difference. Both the sexes look alike.

The average lifespan of the tufted titmice in the wild is 2.1 years. However, since most of these birds die as hatchlings this number does not always hold good. However, if they can manage to reach adulthood, they can easily live for more than 2 years. 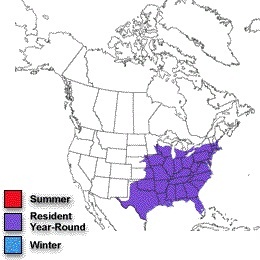 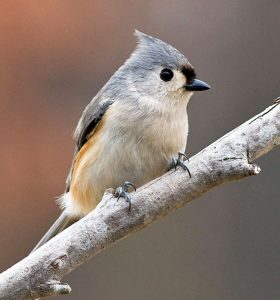 They are common in the eastern region of the Great Plains in the woodlands of the eastern, south-eastern, and mid-western US, and in southern Ontario. Since the 1940’s they have also expanded throughout the eastern seaboard and are still now continuing to expand their distribution range northwards into Canada.

Habitat: Where do Tufted Titmice live

These birds prefer living in woodlands, shade trees, groves, primarily in the deciduous forests with tall trees, and sometimes even in mixed forests. In the suburbs or countryside, they choose to live in orchards, suburbs, or even city parks provided there are a number of large trees.

The Black-crested Titmouse of Texas and Mexico has at times been considered just a subspecies of the Tufted Titmouse, but they are now considered as a different species.

They have slight differences in the quality of their calls, as also display genetic differences. Also, the black-crested is bolder and more confident than the tufted.

The Tufted Titmice are territorial and would defend their territory all year round from the intrusion of other titmice. In the winter months, the different territories of birds would join together in mixed flocks to forage for food. However, by February, the pairs would separate from the winter flocks before they get ready for mating. It has also been noticed that, during their search for food, not just other titmice, but birds of other species like Brown Creepers, Kinglets, Carolina Chickadees, White-breasted Nuthatches, and Downy Woodpeckers also join their flocks.

Tufted titmice are energetic and active birds that are seen hopping around on the outer branches of trees and sometimes even hovering momentarily. Though, they would search for food in the ground as well. While eating, the birds would open seeds and acorns holding them with feet and pounding with the beak. These are diurnal birds and are not active after sundown. Titmice do not migrate extensively, but stay in their territory, inside their nest throughout the winter months. The birds would communicate with each other by sounds, movements, and postures. 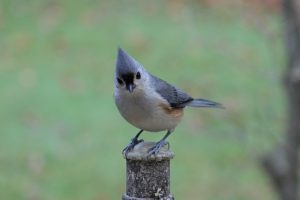 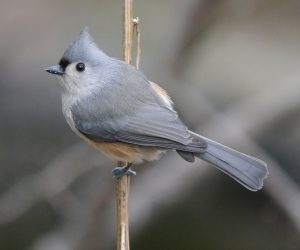 The tufted titmice store seeds in cavities and cracks in trees or even under objects on the ground. They would often be lured by sunflower seeds offered by humans, and would carry them to their nests, one at a time. These birds are fairly confident and can even be trained to come for food when called for, recognizing human voices, and would consume food from their hands. However, the black-capped titmice are prompter in this regard.

Diet: What Do Tufted Titmice Eat 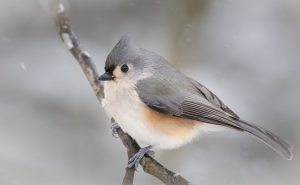 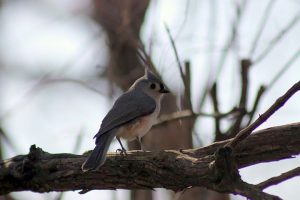 These birds are monogamous and form pairs. The mating season of the tufted titmice is in summer, between March and May. Though most chickadees flock around in large groups outside the breeding season, the tufted titmouse does not. They usually live within their own territory forming a pair. These birds nestle in different cavities of trees, as also in manmade nest box and birdhouse. However, they are not able to dig the holes themselves for building their nests. They live inside cavities made by woodpeckers. Lining the inner cup of their nest with hair is a very common behavior of the tufted titmice. The types of hair they use to line their nest include those of opossums, mice, woodchucks, squirrels, raccoons, rabbits, livestock, pets, and even humans. 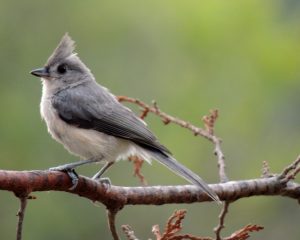 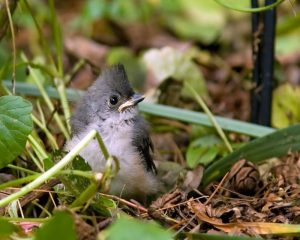 After the female would lay its eggs, the eggs usually hatch between 12 and 14 days of incubation, but mostly on the 13th day. The males do not help in incubation. The female spends about 70-78% of the time on the nest, while raising the babies. Eggs hatched at a time are mostly 5-6 in number (but also 3-9). The eggs are white with fine reddish, purple or brown dots. 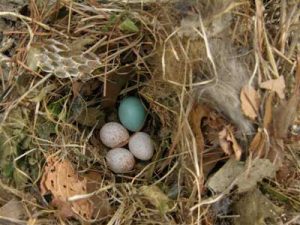 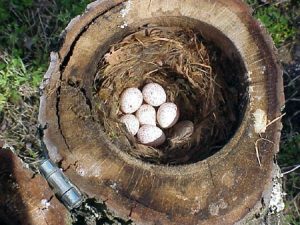 During the early days of the nestlings, the mother stays mostly with the young, while the father moves out to bring foods. Both the parents help in feeding the young ones. The babies take almost 15-16 days to move out of the nest after they are hatched out. The eggs hatch within 10-18 (or sometimes even 24 hours) of each other, while the eggshells are removed while hatching.

The fledging time of these birds is 15-16 days after hatching. It has often been noticed that, one of the young ones from that year remains with the parents, and at times, other juveniles from different other places would also join them. Sometimes the young titmice will even stick around to help their parents bring up their next brood.

Titmice are garrulous, and call frequently. Their calls sound like: “peto, peto, peto” or “peter, peter, peter“, and “day-day-day“. At least ten independent calls of these birds have yet been identified that are differentiated into two types, the higher frequency call and the lower frequency call. While displaying aggressive behavior, these birds emit the three calls from the group of high-frequency.

Audio: You can hear the songs and calls of the Tufted Titmouse here. 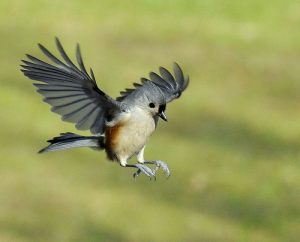 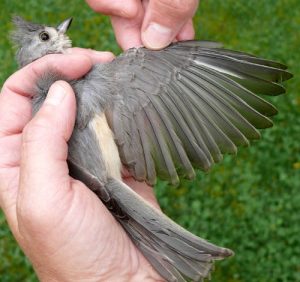 The tufted titmouse is not a threatened species. The IUCN 3.1 has categorized them under the ‘LC’ (Least Concern) species list. 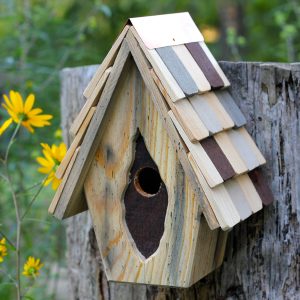 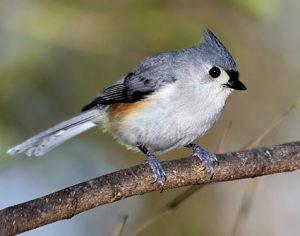