The Black-chinned Hummingbirds are a common species of small American hummers spread throughout a vast region of the US. Though they have been named after their black chins, the most conspicuous physical trait is perhaps the purple band around their neck, which is a clear indication of this species. These western summer hummingbirds are considered as the western counterpart of the Ruby-throated Hummingbird. They are extremely adaptable, and occupy a wide range of habitats. 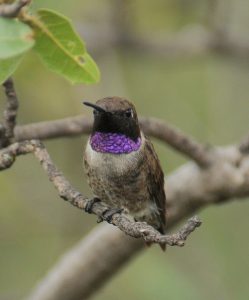 Size: 3.5 inches long with a wingspan length of 4-5-inches. The female is larger than the male.

Feather/Plumage: The two genders have some sexual dimorphism. Adult males have a metallic green back, crown, and breast area, with a black gorget. The throat band is purple, while the collar is white. Females have a general green back and crown, a white breast, a white throat marked by black spots, while the sides are buff, and the outer tail feathers have white tips.

Beaks/Bills: Thin like needle, and are long and straight.

The oldest known black-chinned hummingbird has been recorded to live for 10 years and 1 month.

The black-chinned hummingbirds are widely distributed from southern British Columbia, south across the western states to northern Mexico and central Texas. 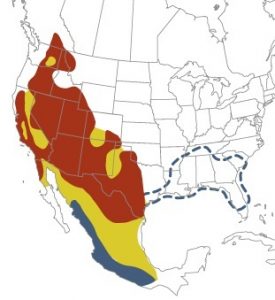 Habitat: Where do black-chinned hummingbirds live

The black-chinned hummingbirds prefer living in the orchards, woodlands, mountain and alpine meadows, canyons with thickets, and chaparral. 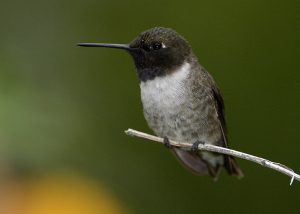 The black-chinned hummingbirds are typically solitary birds that would only pair with the opposite sex during the breeding season. At the same time, they are also territorial, which is common to most other species of hummingbirds. They guard their own territories defending the areas of nesting, breeding, and feeding.

While establishing a feeding area, the males arrive almost a week in advance to the females. They would perch atop high trees to keep an eye on possible intruders, and if found, they would throw vocal warnings. They would also emit excited chippers while chasing other birds while giving intimidating flights.

When feeding honey, these birds hover over the flowers, thrusting their long, sharp beaks deep inside the center of the flower. They would also dart erratically to catch insects midair, or to pluck from the foliage of plants. They would also snatch away trapped insects from the cobwebs. 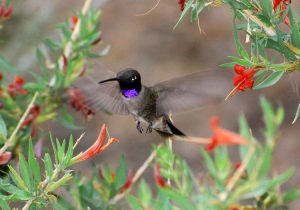 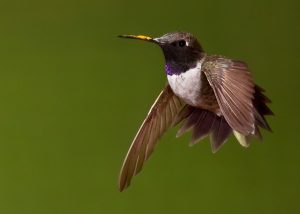 These hummingbirds emit acoustically complex calls that are even more complex than their songs. Their call calls can be texted as “teew-teew-twee”, and “tchew-tchew-twhew”. You can listen to a series of the BCH’s calls here.

These passerines mostly spend the winter around Mexico and southern Texas. During the warmer climate of May the males reach the region of Washington with the females females following them after 1-2 weeks. Between mid- to late June and end of July, the males would leave the breeding areas. The females and babies begin to head south in July, deserting the areas by around the second week of August. 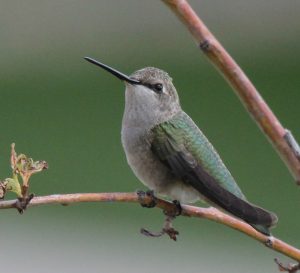 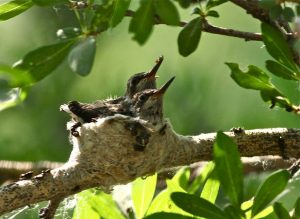 Diet: What do Black-chinned Hummingbirds Eat

The black-chinned hummingbirds take only a few seconds to mate. Prior to that, the male birds perform a to-and-fro ‘pendulum’ movement as a gesture of courtship in order to attract the attention of the female. The movement emits a whirring sound during each dive, and is typically like a U-shaped arc in front of the female. 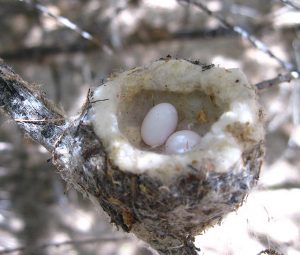 After a successful copulation, the females would lay its white eggs. The nesting site of the breeding pairs is on a treetop or even in shrubs. However, all nests are built between 4-8 feet above the ground level. Though evidences suggest that, they can also build their nests up to 30 feet above the ground. The females build the nest using plant fibers, grasses, spider webs, bud scales, bark, and other small items. The outer part of the nest is camouflaged with things like dry leaves, debris, lichens. The nest looks like a compact cup, and stands atop a horizontal branch.

The clutch size is rather small, with typically 2 eggs per clutch, as is typical with most other species of hummingbird. The mother would incubate the eggs for a period of 13 to 16 days, while the father would guard the nesting site. When the babies are hatched, the female takes the parental care. The process of feeding is rather strange, with the mother regurgitating small insects, often mixed with nectar. The babies are fed mostly with insects for meeting with their daily need of protein. The parent uses its long bills to thrust the food inside the mouth of the hatchlings. As the young birds take about 21 days to become independent, after which they gradually attain adulthood and learn to fly. These birds normally breed 1-2 times in a year, which might also extend to the third time. 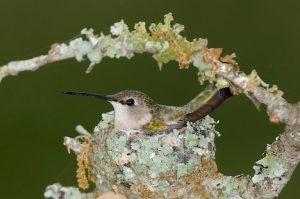 Because of their small size, the black-chinned hummingbirds are vulnerable mostly to the birds of prey, and also to other insect-eating birds, and many local animals common in their habitat. 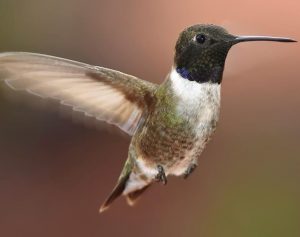 The black-chinned hummingbird is not a threatened species. The IUCN 3.1 has categorized them under the ‘LC’ (Least Concern) species list. 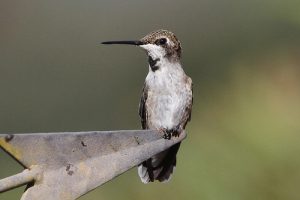 One response to “Black-chinned Hummingbird”