Tilefish is a long, slender fish that lives in deep sea water.

The pronunciation of this fish is given as “Ta-eel Fee-sh”.

This fish has reportedly originated in Indonesia and Vanuatu.

This fish has a long life. Radiocarbon aging studies suggest that the fish can live for approximately 50 years. Female fishes of this species can live for 46 years and generally has a higher life than male fishes that live for about 39 years.

These are usually large-sized and predatory in nature. They have two rows of teeth on each of their powerful jaws. The inner rows have small sized, sharp teeth clustered together. The outer rows are bigger in size and have relatively blunt teeth. The fish relies on its keen power of vision to hunt down its preys.

These feed on invertebrates such as

The fish comes in a variety of colors such as pink, gold and blue. There are also purple colored tilefishes.

These fishes mature very slowly and take time to breed. They reach sexual maturity only after they have reached 6 years of age. These have an approximate length of 20 inches and 3 pounds weight during reproduction. Female fishes produce anywhere from 2-8 million oceanic eggs.

It is gonochoristic in nature and not a hermaphrodite. Fishes born as male and female remain so throughout.

It is the largest of the Malacanthidae family and can often grow bigger than 3 feet (90 cm). Males reach a maximum size of 45 inches while females attain 43 inches utmost.

Adult fishes of this species generally weight 10-25 pounds on an average. However, these fishes have been found to be as big as 55 pounds. In 2006, a Golden Tilefish caught in New Jersey made news due to its extraordinary size of 55 pounds.

The golden variety can be found living in clusters close to the edges and heads of underwater canyons. They go at greater depths as they grow bigger in size. In the Gulf, these fishes reside in burrows clustered in small groups. They can live at great depths of over 1,400 feet. These burrows or canyons are referred to as “pueblo” owing to their likeness to the Native American Pueblo communities in South West United States.

Is Tilefish Good For Your Health?

The fish, especially those that live around the Gulf of Mexico, are rich in mercury. This can cause severe health ailments in unborn babies, babies who are feeding on breast milk and young children less than 10 years of age.

When eaten in large quantities, this fish can cause serious diseases in healthy adults. Consumption of large amounts of fish increases the level of mercury in human body. This toxic element can take as long as two years to completely go away from body.

It is not safe to have Tilefish while pregnant. Pregnant women and nursing mothers should completely avoid this food. As aforesaid, it increases the mercury level in the body. Mercury can have toxic effects on unborn babies. In worse circumstances, this can result in a miscarriage. It may also affect the health of breastfeeding babies quite seriously. Tilefish and pregnancy are incompatible.

Is Tilefish Also Known As Blanquillo?

Yes, it is also known as Blanquillo and Golden Tile. Some of the other Tilefish names are Golden snapper, Golden bass, Rainbow tilefish and Great northern tilefish.

Tilefish consists of six species. Of these, two are highly famous. These are 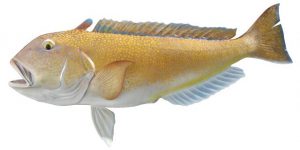 Scientifically known as Lopholatilus Chamaeleonticeps, this fish is found in the waters of Florida. It is said to be the most colorful of all fishes. It has a bluish-green back with a pearly white underside. The fish has touches of blue and red opalescence. There are irregular golden-yellow spots all over its body. The areas under the eyes are ocean-blue in color. It also has an adipose crest or flag on its head.

It has a pale olive-gray appearance with a white belly. Unlike Golden Tilefish, it does not have an adipose head crest. It is found in water that is anywhere from 250 to 800 feet deep. It can be seen in Florida and Virginia to the Mexican Campeche banks. It generally survives in water that has a temperature of 59-73° F. It has a flavor similar to Golden Tilefish taste.

This fish has a purple-lilac colored body which gives it the unique name that it has got. It has dark red spots on its tail that make an attractive V shape. It is a popular pet for many people as the attractive color of the fish lends a grand beauty to any room. The fish is known to successfully multiply in aquariums. It needs a large aquarium of about 50-gallon size or over to swim freely. It is hostile to own members but lives peacefully with fishes of other species.

It is best to purchase Purple Tilefishes between 3 and 6 inches. The diet for this fish should ideally include Mysis Shrimps, marine fishes and, flesh of crustaceans.

Know the approximate nutritional value in the raw, edible parts of a 4 ounce Tilefish.

This fish contains 0 gm carbohydrates and saturated fat. It is eaten either in boiled or grilled form. The leftover pieces are used in sauces, salads or soups.

A Tilefish of average size has approximately 220 calories. 100 gm of Golden Tilefish has about 96 calories.

The Golden variety is the largest of Tilefishes and also lives the longest. This fish was first caught in large numbers in 1879 in South Nantucket. It was the first time when Golden Tilefishes were discovered as a new species. The great taste of this fish was highly appreciated. As a result, commercial Tilefish fishing was started for the golden variety in the area surrounding Nantucket. Fishing for the golden variety is done along the East Coast of the United States and also in the Mexican Gulf.

Many living beings prey on these fishes. The predators of this fish include

Tilefishes also prey on each other for food. When it senses a threat such as a hunting attempt, it quickly retreats into its burrow.

The golden variety of this fish can easily be differentiated from other members belonging to the Malacanthidae family. Its distinguishing characteristics involve its large adipose crest on head. Male fishes generally have a bigger adipose flag than females. This helps distinguish males from female ones.

This fish is rich in vitamins and vitamin complexes that are essential for bodily functions.

The fish contains a number of important amino acids like

Want to know how these fishes look like? Here are some Tilefish images for your benefit. Check out these Tilefish photos to get an idea about the appearance of these creatures. 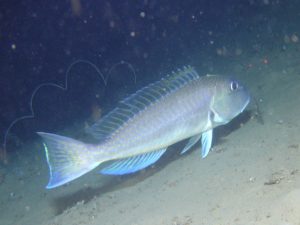