The Speckled King Snake (or, speckled kingsnake), also known as the ‘Guinea Snake’, or the ‘Say’s Kingsnake’, is a species of snake endemic to the United States, spread especially across the state of Louisiana. The semi-banded variety of this terrestrial snake is the most common type that is extensively found throughout the range of the ‘kingsnake’ family. These reptiles are non-poisonous, and are widely kept as pets. It has derived its name for the yellowish specks on its body. 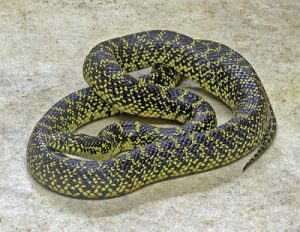 Physical Description: How does a speckled king snake look

Size: By size, they are medium to large, attaining a length of 36 to 48 inches.

Head: Two spots are found in the center of their head. The edges of the head have 2 to 4 yellow lines on the dorsal surface.

Skin: The ground color is usually dark brown to blue-black. They look speckled mainly because of a yellow to whitish spot in the middle of most of their scales. The belly skin is flavescent, spotted with rectangular to irregular black marks. The baby snakes have light spots on the backside forming crossbars. Some of the individuals, mainly those that belong to Southeast Texas and Southwest Louisiana, often have alternating dark blotches with reddish-yellow ventral coloration. 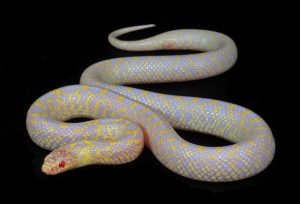 Eyes: The eyes of the adult snakes are commonly red. 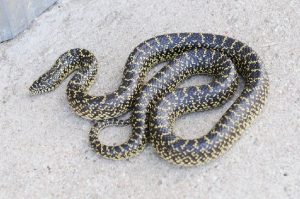 The speckled king snakes live for up to 20 years in the wild.

The speckled king snakes are spread throughout Louisiana, Arkansas, Missouri, and Mississippi, but have the greatest population density in the Blackland Prairies. They share their location in common with the Desert, the Eastern, and the Black Kingsnakes in Texas, western Oklahoma, and southwestern Kansas, southern and northern regions of Alabama, the western parts of Tennessee and Kentucky, and also in the southern parts of Illinois. 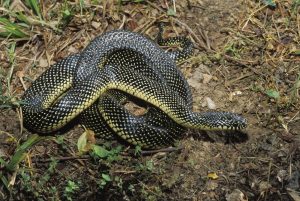 These reptiles can live in diverse habitats like prairies, brushy areas, forest edges, rocky, wooded hillsides. They also share their space with humans including in the farms, open fields, swampy or forested areas, and even in towns.

The speckled king snakes are potentially docile by nature, often striking only one or two times after capture. They are very active, when it comes to foraging and would trace their prey by scent, following out like hound dogs. However, their process of ‘smelling’ is primarily dependent on their forked tongue rather than their nose.

Speckled kingsnakes are mostly diurnal, and are active between April and October. They evade the hot temperatures by becoming active during nighttime in the summer months. They are opportunistic feeders. As and when they find a prey, they would consume by seizing, and then constricting it. They have a significant contribution to the ecosystem by keeping the population of other snakes and rodents in check. Those that are bred in captivity are normally prone to remain calm throughout their lives. Individuals caught in the wild have an unpredictable nature that might range from aggressive freaks to completely gentle ones. These snakes are not known to be good climbers. 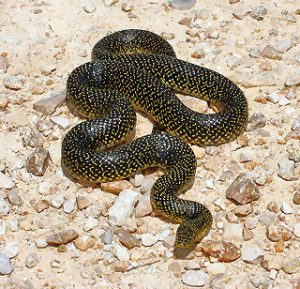 Though these snakes do not take long to calm down in captivity, they have a bad reputation for being more aggressive than many other species of American kingsnakes. Although, in the long run, it is more likely that they would calm down upon frequent handling, and surrender themselves as decent pets. Hence, for petting, snake experts recommend captive bred specimens over the ones that are collected from the wild.

The SKSs typically move at a slow pace. Like most other serpentine species, they would hibernate in the biting cold of the winter months. As soon as temperatures fall, the speckled king snakes would take no time to slip into rock crevices or burrows dug by other animals. With the arrival of spring, they would come out to bask in the sunny spots and be out for their first meal of the year. During the rest of the summer months, they would spend time foraging. These animals are aggressive feeders, and care should be taken while feeding in captivity, and not to handle them while feeding. 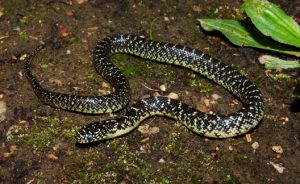 In the wild, the SKS would feast upon whatever is available to them including small reptiles, amphibians, birds, rodents, frogs, lizards, small mammals, and eggs. They occasionally eat fish, and would even consume other species of venomous and non-venomous snakes. Adults feed mainly on rodents and other snakes (including various water snake and cottonmouths).

These snakes, especially their eggs and the young ones, are mostly vulnerable to local birds of prey, some carnivores, and other larger species of king snakes.

The speckled king snakes are primarily solitary, except during breeding season. Soon after their hibernation, the males actively take part in seeking for females for mating any time between early and late March. After the rituals of courtship and a successful copulation, the gravid females will lay their eggs around the end of summer. 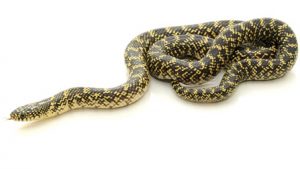 The females would normally lay their eggs under stumps, rocks, logs, or decaying plant material. The hatching takes place in the fall. They lay two clutches of eggs per breeding season, with anything between 6 and 25 eggs per clutch.

When born, the hatchlings measure between 7 and 9 inches. The baby king snakes tend to be a bit feisty, and starts attaining adulthood within 4-6 months from birth. The young snakes mainly feed on lizards and other small-sized snakes including ribbon snakes and baby garters. 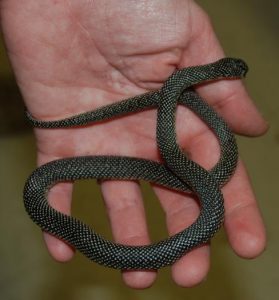 The speckled king snake is not an endangered species. While the IUCN 3.1 list has not yet assessed these snakes (until 2013), the speckled kingsnake has been listed as one threatened species by the state of Iowa.