Eastern Hognose snake is a sleek, mildly or almost non-venomous and very interesting species of snakes. Their defensive nature is as interesting as their other traits of behavior. The species is perfectly safe and not endangered. It is widely found in many regions of the US. It can be an exotic pet if taken proper care, as it almost never bites.

Length : An average adult Eastern Hognose snake is of about 28inches in length. Females are longer than the males of the species.

Appearance : Their nose is a little upturned, which helps them to dig into sandy soil for habitat.

Skin : The skin color varies a lot. It can be found in red, orange, brown, green, black, grey, and in many other earthly colored shades. Even the patterns are very much variable. Checks, blotches, even pattern-less can be found. The underneath side of the snake is solid grey, cream, and yellow colored.

The Eastern Hognose snake is one of the non-venomous snakes. They are a very interesting species to observe their behavior. 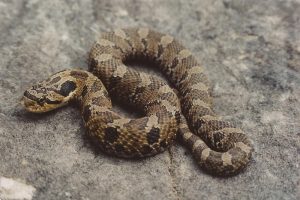 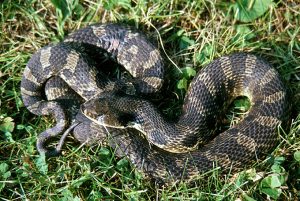 The exotic species of snakes are found across a wide range of U.S.A. Eastern Hognose snakes can be found throughout the eastern coast of the United States. In the western coast their range spreads over the Appalachians and all over the Midwest. They are to be spotted throughout south of Vermont to south of Florida, in the eastern part of the country. They have been traced at the Great Lakes in western part of the country, in south the species can be traced throughout central and eastern Texas. Eastern Hognose snakes have been also found in the entire northern and southern Carolina.

These snakes are likely to be found in woodlands where there is sandy soil. Coastal areas are also a favorite of them. They can also be found in and around farmlands and fields.

These snakes live up to 12-15years, unless face an unnatural death.

April to May is the mating season of the Eastern Hognose snake. They are mostly active during spring season for reproduction, and also during the fall sometimes. The female species lay about 8 to 40 eggs, in a season. Those eggs take a period of about 60-65days to hatch. The hatchings come out around late July till September, and they are their parents’ look alike. 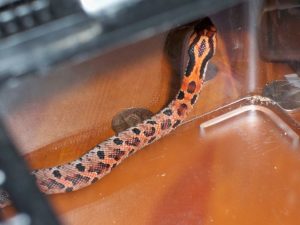 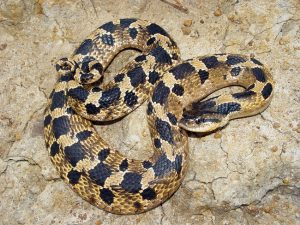 Eastern Hognose snakes belong to the colubrid species. These species are harmless species of the snake family tree.

Toads are the most common and favorite diet of the Eastern Hognose snakes. If there is a dearth of toad, then the species can also suite themselves with small birds, birds’ eggs, insects, smaller snakes, young snakes, dead smaller or bigger animals, small mammals, lizards, and reptile eggs. They have strong teeth that help them stab the prey and eat, and not just swallow.

The Eastern Hognose snake is a very interesting species to observe. They have some very curious attributes and characteristics.

Though this species of snake is easy and widely available in black pet market but it is very difficult to maintain them. Their diet is quite troublesome to arrange on a regular basis. It has been observed that if not fed properly coping up with their natural diet then the species stand risk regarding liver troubles. It has been studied that when bred in captivity, their natural life span also decreases.

This species of snakes are not aggressive types. They only attack to be defensive when feel threatened by the predators. They have many defensive adaptive features. 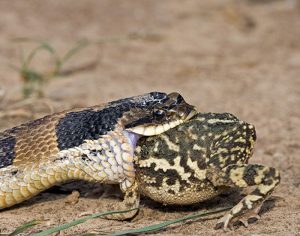 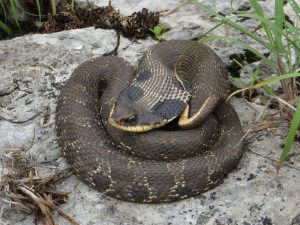 According to IUCN Red List Of Threatened Species, the Eastern Hognose snakes are quite safe a species as of yet. They are widely distributed, that too in large population. Neither their diet nor their suitable climatic condition is under threat, thus not even the species is.

This exotic species of snakes are very shy. They are completely harmless as they are non-poisonous. But petting them might not be a good idea for their existence longevity. But it is very interesting to observe them. Though the species is completely safe in terms of their existence, still it is better to be careful not to threaten their existence number in singles.