This large snake has an attractive coloration. Here is their general description:

Length: Their snout-to-vent length ranges between 90 cm and 152 cm. Hatchlings are 8 inches to 13 inches long.

Color: The underbellies or ventral sides of their bodies are covered with creamy white scales. The color of the scales covering their backsides varies from brilliant blue to dull grey. They have light brown to grey dorsum. Hatchlings of these Racers have dark blotches on their backs.

Eyes: Their eyes are larger compared to that of many other species of snakes. The skin around their eyes is generally darker in color than the rest of the body.

Snouts: They have brownish orange snouts. 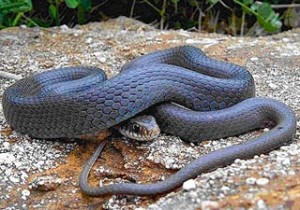 The range of their distribution extends from Canada in north to Guatemala, Mexico and Belize in south. This Racer snake is found throughout United States and the eastern regions of the Rocky Mountains. Their distribution range includes Pelee Island, Indiana, Ohio, Michigan, Illinois, Iowa and Wisconsin.

These reptiles can be found in open as well as semi-open habitats. They prefer to live in savannas, hedge rows, meadows, weedy lake edges and marshes. It is believed that all these habitats are necessary for fulfilling their ecological requirements. The range of their habitation extends to an area of 25 acres.

Adult Blue Racers feed on various songbirds, rodents, smaller snakes and frogs. Different insects such as spiders, worms and crickets are the foods of the Blue Racer Snake hatchlings and juveniles.

Find out about the behavior patterns of the Blue Racers:

Large birds of prey including northern harrier, red-tailed hawk and great horned owl are known to prey on this snake. Other predators include Coyotes, Raccoons, Foxes, Dogs and various wild Cats. The Blue Racer hatchlings and eggs are the prey of various carnivorous birds and mammals.

They have the following adaptive features to help them survive in their natural habitat.

Their mating season starts around April and continues through May.

Female Blue Racer Snakes mature at 2 years of age, but they cannot reproduce until they become three years old. The males become physiologically mature at 11 months. But they are able to reproduce only after reaching 2 years of age. These oviparous snakes generally reproduce twice every year. The females build their nests in sand, tree cavities, leaf litters and unoccupied burrows of small mammals. They lay 6 to 25 eggs in communal dens during late June and leave the dens afterwards. 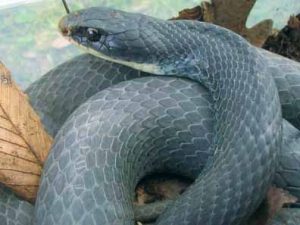 The Blue Racer Snake eggs hatch in August or early September. These white, oval eggs are 2.5 cm to 3.9 cm long with leathery shells. Hatchlings use their “egg tooth” to cut their way out of the eggs. The hatchlings do not receive any parental care, but they may remain near the female Blue Racers for a few hours after birth.

Their lifespan ranges from 15 years to 20 years.

They are known to hibernate in groups during the cold winter months. Hibernation generally takes place in rocky mountain areas.

These snakes are generally not kept as pets for their aggressive nature. They tend to attack and bite anyone who approaches them. Their large size also makes it difficult to keep them in glass tanks or cages. Due to these reasons, they do not make good pets.

Here are some interesting facts about this Racer Snake:

Here are some images of these racer snakes. 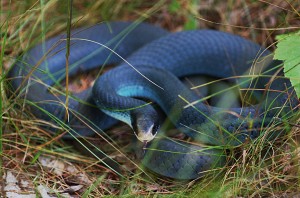 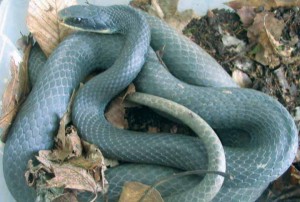