The Ringneck Snake is a species of small North American snakes that belong to the harmless colubrid family. Also called the ‘ring-necked snake’, they are known for their bright coloration and their strange posture of curling up the tail-tip when threatened. Because of their secretive nature, scientific research for this snake lacks to a considerable degree, and more comprehensive investigations are greatly required. The snake gets its name from the broad band in the neck region that separates its head from the body.

Weight: The average weight of both the male and the female is 1.32 g.

Coloration: Despite having several subspecies, they are morphologically quite similar throughout much of their distribution. The dorsal side is solid brown, olive, and bluish-gray to smoky black, divided by a bright red, yellow, or yellowish orange neckband. 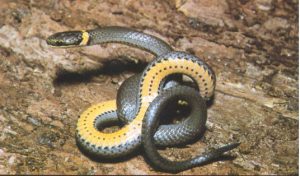 Body: The snake’s body is small and has a slender shape, with the head being the same width as the body, and the tail tapering towards the end. The entire body is covered with very smooth scales.

Sexual Dimorphism: While the male snakes typically have tiny tubercles on their scales just anterior to their vent, it is absent in the females. Also, the females are significantly larger than their male counterparts, with the males reaching no more than 31 cm, and the females can reach 39.

The average longevity of this reptile species in the wild is 10 years. However, the maximum recorded lifespan is 20. In captivity, they would live less – up to 6 years.

The ringneck snakes are found across much of the United States, southeastern Canada, and central Mexico. Researchers believe that the species is abundantly spread throughout most of their range, however, because of their secretive nature, they are rarely seen, and hence, there is no scientific evaluation in support of this hypothesis.

Habitat: Where do Ringneck Snakes Live

These snakes prefer areas with gently moistened soil located on the banks of rivers, ponds or streams, swamps, damp forests, open woodlands, under-stone or under-bark coverage and rocky hillsides. However, they are terrestrial creatures and usually avoid direct contact with water. 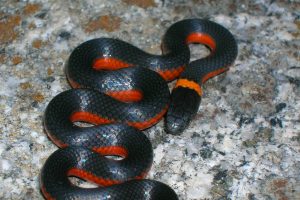 The 14 recognized subspecies of the ringneck snake are as follows:

These are primarily nocturnal creatures and are active during nighttime. They are rarely found during the day, with some individuals come out of rock crevices to bask in the sun. The snakes return perennially to single denning sites.

The snakes are primarily shy and non-aggressive species. However, they are social creatures with populations being seen living in large colonies of up to about 100 individuals. Several communities of about six or more have been studied to be sharing one single microhabitat. There is, however, no information about the hierarchical structure of their colonies as yet.

When the ringneck snakes feel threatened, they curl up their tails, exhibiting the bright reddish-orange posterior ventral surface. This is a unique defensive behavior for which they are famous.

Ringneck snakes communicate with each other using touching, nuzzling the head, rubbing, and releasing pheromones. Their perception of the surrounding environment, too, works with the help of the senses of touch, sight, and smell. 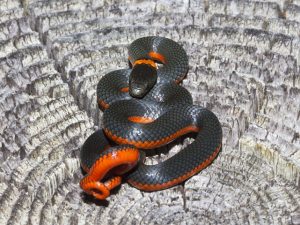 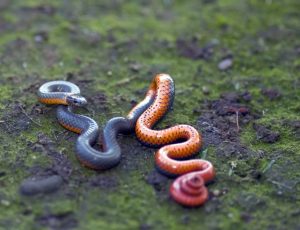 Diet: What Do Ringneck Snakes Eat

Frogs, small salamanders, slugs, lizards, earthworms, and the young offspring of other snake species make their primary diet list. The Michigan populations (D. punctatus edwardsii) have been reported to be preying almost exclusively on red-backed salamanders.

Are the Ringneck Snakes Venomous (Do they Bite)

Ringneck snakes are not classified as poisonous, but recent studies have found that their saliva contains a mild toxin. They are non aggressive and have tiny, rear-facing fangs that do not pose any threat to humans even when they handle the small reptile.

These snakes do not tend to bite, but even if they wish to, they cannot open their mouths wide enough to inflict a bite on a human with their tiny fangs. If they can still manage to give one, their venom is so mild, that it would feel like the sting of sweat bee.

When the mating season comes, the males of the species are seen rubbing their heads or closed mouths on the females, while the latter gives out pheromone as a signal for mating, while they try to attract a male.

When it comes to the act of sexual intercourse, the male will inflict a bite on the female’s neck ring, aligning each other’s bodies, with the male releasing sperm. Mating usually occurs during fall or springtime, while the eggs are ready to be laid by June or beginning of July. 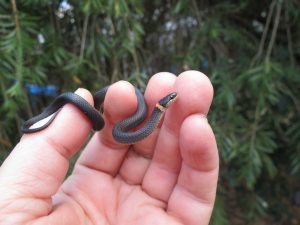 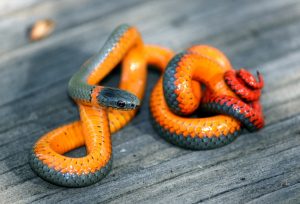 The female ringneck snakes would lay 3-10 eggs at a time, once each year. After deposition in some moist location, the eggs are kept covered in the wild. In case of snake colonies, they may be laid in communal nests as well.

The eggs are elongated, white in color with a yellowish end measuring about 1 inch. The baby snakes hatch out between August and September. Both the male and the female juveniles take around three years to reach the stage of sexual maturity.

When born, the babies around 8 in (20 cm). However, the males attain maturity at a smaller size, compared to the females. The eggs or the young ringneck snakes eggs do not get parental care, which is one of the primary reasons for the high mortality rate of the juveniles.

The primary enemies of the ringnecks include larger snakes like coral snakes, king snakes, and racers. Other animal species like shrews, armadillos, bullfrogs, skunks, wild hogs, possums, and screech owls also prey upon this small snake. Even centipedes and large spiders have been seen feasting upon the young ones. 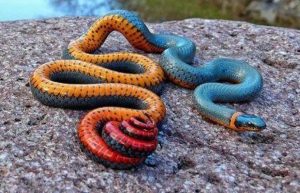 Picture of a Ringneck Snake

The IUCN 3.1 has enlisted the ringneck snake under their ‘LC’ (Least Concern) category.