Satanic Leaf Tailed Gecko is primarily a nocturnal reptile which belongs to the Gekkonidae family. They are endemic to Madagascar. In 1888, George Albert Boulenger referred this species as the smallest of all the Uroplatus geckos, though some say Uroplatus ebenaui is the smallest in this family. In the wild it often remains unspotted as it almost looks like a dead leaf. 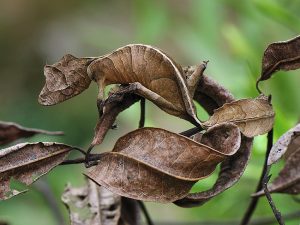 Size – An adult is generally 3 – 6cm long including their tail. At times it can be up to 9cm.

Color – They are generally brown in color. But they can also be deep yellow, deep orange, purple and tan.

They have tiny black dots on the underside of their body. It helps to distinguish this particular species from the other members of Gekkonidae family. They have sticky scales under their toes and fingers which helps them to stick to trees and other surfaces. Their tail is flattened and looks almost like a decaying leaf. Few specimen of this creature have red eyes. Geckos do not have any eyelids. They use their long tongue to clean the debris and dust which gets into their eye.

Satanic Leaf Tailed Geckos are solitary species. They generally loiter in their range during night. They are an expert in avoiding predators and perform a number of tricks to scare them away. They deceive their predator by shedding their tail temporarily or by suddenly opening their jaw to show their bright red mouth.

These carnivores reptiles are nocturnal hunters. They feed on different kinds of insects, flies, worms and spiders. They can easily deal with oversized prey by using their large mouth.

This species is only found in the central and northern tropical forests of Madagascar and its nearby islands. In the wild, geckos are not found anywhere else in the world.

They like to stay in undisturbed tropical areas. These reptiles are generally spotted in leaf litters or small sized trees. They prefer to live close to the ground. 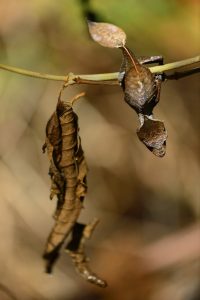 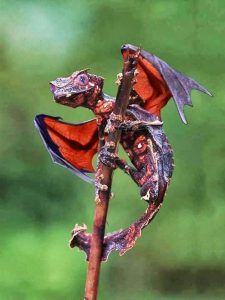 Their color helps them to blend with natural surroundings. Because of this, they find it easier to survive from natural predators.

Since this reptile is native to one place, very little is known about their reproduction. Their reproduction begins at the start of the rainy season. They lay a clutch of 2 – 4 eggs on leaf litters or in fallen dead leaves. Eggs hatch after 60-70 days.

In the wild, they live around 4 – 8 years, while in captivity they are known to live more than 10 years.

There are many sub-species that belong to the Gecko family. All the species are found in Madagascar and its nearby islands.

All these sub-species are considered as threatened. 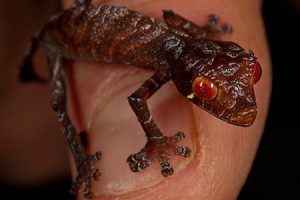 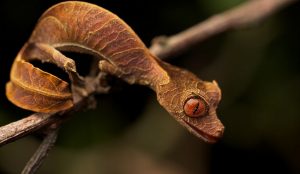 This species is considered as one of the most popular pets around the world. Though petting this reptile is a reason of its decline in recent years as it encourages illegal pet trade.

To increase the population of this reptile, few zoos in the United States have bred them. At present it is necessary to breed them in zoos or any other preserved locations.

Here is a brief care sheet for this species:

Housing – A 10 – 30 gallon aquarium is perfect for keeping one or two Satanic Leaf Tailed Geckos. Provide them small trees so they can climb on. Artificial plants can also be used. Spread dead leaves on the surface of the aquarium.

Temperature – To make the geckos comfortable, keep the daytime temperature around 65 – 80 degrees F. Lower temperature is preferred at night. The humidity level needs to be around 75% – 100%.

Light – This species are not fond of direct and harsh lighting. UV producing bulbs can be used as it often stimulates reproduction.

Diet – Their diet includes mealworms, butter-worms, wax-worms, super-worms, crickets, insects and silkworms. Provide a bowl of water and make sure to change the water on a regular basis.

Maintenance – Try not to hold the creatures with bare hands. The aquarium needs be cleaned on a daily basis. If geckos are loaded with parasites, de-worming is must.

At present, some of the biggest threats to these reptiles are deforestation and loss of its natural habitat. Since they are very popular as pets; illegal trade is another big concern for the existence of this reptile.

Their survival totally depends on the existence of Madagascar tropical rainforest habitat. To save these animals, protected areas are very important, though there are reports of illegal trade from these areas also.

At present, this species is known to be in three protected areas-

This odd looking reptile comes in the list of vulnerable species, according to IUCN. 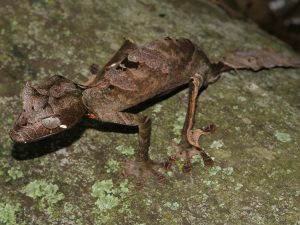 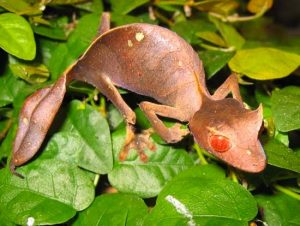