House Geckos are small lizards, native to the southern Asia. They are named so because they are mostly found climbing the walls and ceiling of human home. they are also called Asian House Gecko.

House Gecko grows up to a length of about three to six inches. Its body and limbs are of moderate size. It has a concave forehead with a long snout. They have large eyes without eyelids. The length of the snout is longer than the distance between its eyes. They have triangular head with small round ear opening. The tail of the house gecko is covered with smooth scales. They have broad padded toes without webs.

Their entire body is covered with small granules which are more prominent and bigger on the snout. Their body color varies between pale yellow to grayish white. 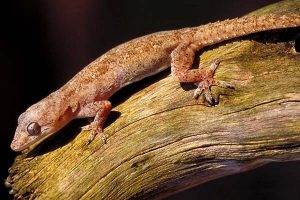 House geckos have been named so because they are mostly found around human homes. However they are found in tropical rainforest and dry lands, around bushes and low trees.

House geckos are active at night. They stay motionlessly under artificial light to hunt down insects attracted to the light. They run back to their shelter if they feel threatened. Like most of its species, house gecko leaves its tail when it is alarmed. They create a squeaking sound while fighting or during the breeding season to attract the female. House geckos prefer areas of hot climates and mild, short winters. They can survive short periods of cold climate.

House geckos become sexually mature within a year. Their mating season starts from March to July. Females lay one to two eggs between April to August. The belly of the female house gecko is translucent hence one can see the eggs inside the belly.

House geckos are tiny inexpensive lizards which can be kept in a vivarium as pets. Since they are extremely fast, it’s not easy to handle them. They have an amazing climbing skill. Keeping house gecko as a pet, it’s important to find a vet on exotic animal and not just a cat and dog vet.

A spacious terrarium would allow the house geckos a vertical space for climbing. Since the male house geckos are territorial, it is better to keep one male per terrarium, females get along.

The terrarium of the house gecko should have at least 2 to 3 inches of substrate to maintain humidity level and to support live plant. Substrate of coconut fiber, reptile bark and mulch bedding is recommended. Aquarium gravel or sand should be avoided.

Some believe that, since house geckos are nocturnal, they do not require exposure to UVB light. However some experts feel that providing UV light is essential as it affects the overall health of the house geckos. 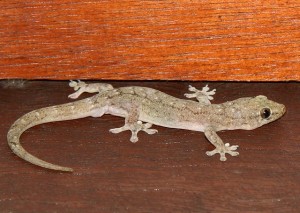 House geckos should be provided with a daytime temperature of 77 to 88 degree Fahrenheit and the temperature should be lowered to 70 degree during the night. The temperature can be regulated by ceramic heat element or a heat mat under the terrarium. A night bulb would keep the heat at night.

A moderate humidity level of 60 to 70 percent relative humidity is required. House geckos drink from the water droplets from the mist.

House geckos need space to climb so branches live plants and driftwoods would be recommended. They require hiding spots too. A shallow dish with fresh water should be provided.

Here are some of the tips to keep house geckos away:

House geckos are not threatened species. They are very territorial and fight for their food supply therefore might threaten the native geckos in the area.

Here are some of the pictures of a house gecko. 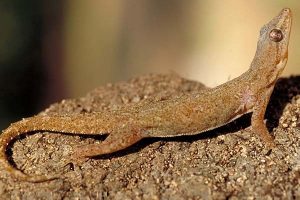 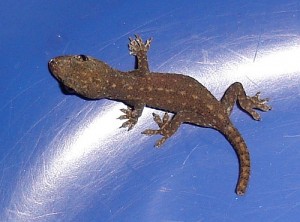