The African Fat-tailed Gecko is a species of lizard abundantly spread throughout the western regions of the continent of Africa. Often confused with its close cousin, the Leopard Gecko, this nocturnal creature reptile is widespread in the pet trade. They are sexually dimorphic, with the males being larger and ornamental in appearance.

Skin: Usually tan to beige and brown stripes with a pale pink or off-white underbelly; a thin white line on the dorsal side, from the head to the tail, is often seen. 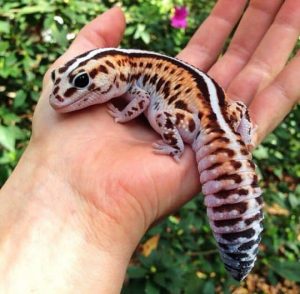 Eyes: Small black eyes that are roundish triangular or almond-shaped.

Tail: Wide, thick tail with vertical segments that gradually thins towards the tip.

In captivity, the African Fat-tailed Gecko will live anything between 10 and 25 years (average 15 years). The longevity of the wild specimens is not known.

The gecko is found only in West Africa, from Senegal to Cameroon. No regional subspecies of this reptile has yet been classified.

African Fat-tailed Geckos prefer dry and arid regions; however, they would usually spend their time in dark and humid places. 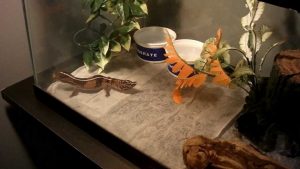 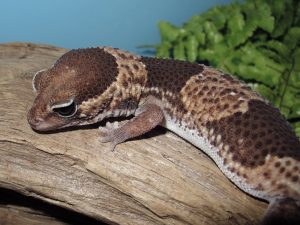 Fat-Tailed Geckos are relatively calmer and docile compared to other gecko species including the Leopard Gecko. They are primarily nocturnal, entirely terrestrial, and will move out in search of food only after sundown. During daytime, they would usually spend lazy hours sleeping or hiding inside crevices or under barks.

In general, they move slowly, but when threatened, they will run away quickly, but only for a short distance. They vocalize and communicate with other members by clicking their tongue on the roof of their mouth.

These reptiles are territorial, and not at all social. They prefer spending time alone, other than during mating. The males are often seen as belligerently involved with other males. When they are active, they will curl their tail upwards; while when excited, like during mating, courtship, hunting or display territorial aggression, they would writhe and wriggle the tail in a zigzag manner.

Interestingly, among the Fat-tailed Geckos, competition for reproduction (ability to acquire mates) is present only in the males, but never among the females. Their breeding season is for around five months each year. Their mating system is polygynandrous (both the genders have multiple mating partners during breeding season).

The females can lay eggs up to five clutches a year, though there are many instances of females laying fewer. After the gestation period is over, the baby or young geckos hatch out of their eggs, weighing only around 4 grams. Both the juvenile males and females grow at equal rates, and eventually, reach the age of sexual maturity between the age of 8 and 11 months. 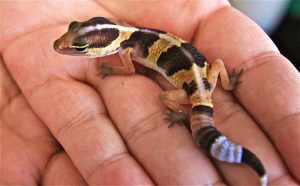 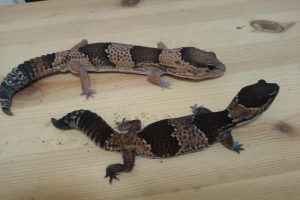 The natural enemies of these geckos are snakes, larger reptiles (like monitors, chameleons, etc.), and various other birds and mammals.

Minimum of 10-gallon capacity, but larger the better (up to 20 gallons). One with a screen cover is appropriate. Make sure there is enough room for food and water dishes, etc.

Attach a mister to maintain moisture and humidity especially during shedding. A bowl of fresh water should also be provided.

These lizards do not climb; however, you should also provide sites for hiding and burrowing. Place vines, small plants, and caves to hide.

What do Fat-tailed Geckos Eat

Fat-tailed Geckos are insectivorous. Feed them with healthy and gut-loaded crickets, roaches, mealworms, king mealworms, and silkworms, coated with supplements of vitamin/mineral from time to time. Also, mealworms fortified with calcium may be offered once every four weeks. As a treat, you can also occasionally give a pinkie mouse to the adults and the egg-laying females.

Other Things to Remember: 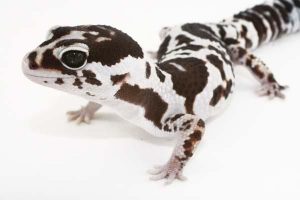 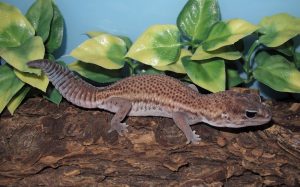 As described by the IUCN Red List, “This species is listed as Least Concern as it is widespread, thought to be common, and subject to only localized threats.”