Ribbon eel, commonly known as the bernis eel or leaf-nosed moray eel is a species of moray eel.  They swim like a dancing ribbon and hence are named as such for their movement. 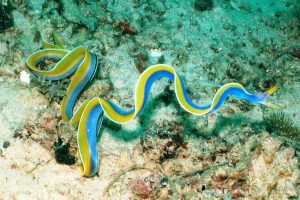 They are common throughout the Indo-Pacific region encompassing the Great Barrier Reef of Australia, and also in French Polynesia and East Africa.

Ribbon eels stay inside caves, under the coral rubbles or on mud and sands in coastal reefs and lagoons. 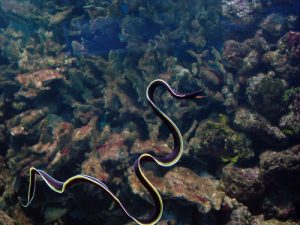 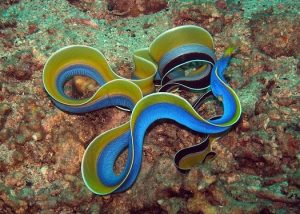 These carnivorous eels feed on small fishes like guppies, fathead minnows, and other crustaceans. They use their clamped nostril to attract the prey and then using their strong jaw they catch them.

Male and female ribbon eels encounter each other only for mating. They mate when the water is the warmest. Females lay leaf-shaped eggs and die within a month. The eggs keep on floating in the ocean for around 8 weeks before hatching.

All ribbon eels are born male and some of them develop female organs after reaching the adulthood. They change their color from blue to yellow and subsequently lay eggs. 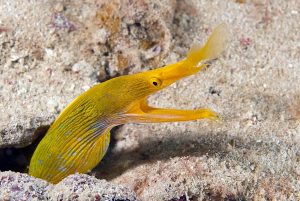 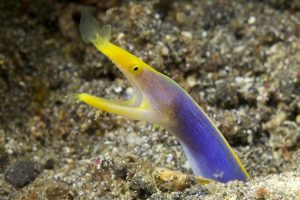 They usually live for around 20 years in the wild, but only a month in captivity.

They are preyed upon by large fishes, barracudas and other types of moray eels.

Ribbon eels are listed under the “Least Concerned” category. 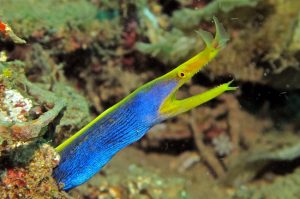 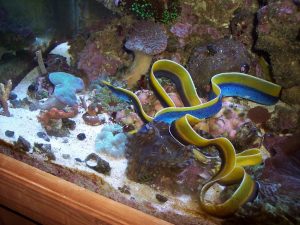