Procambarus alleni is a bright blue species of freshwater crayfish that has acquired immense popularity in the aquarium trade and hobby. This species is native to Florida.
The species also go by other popular names including the Blue Crayfish and Electric Blue Crayfish.

Procambarus alleni is a freshwater crayfish.

Size: This species is approximately about 7-8 inches.

Color: Almost all of the body of the procambarus alleni is blue in color. Some may have red sides or speckling on the area of the under belly. 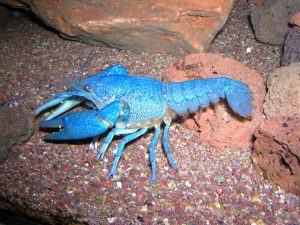 The aquarium trade breed is mostly a brilliant blue. There are chances of those caught in the wild to be blue, brown or red in color.

This crayfish is generally found in freshwater environment.

Procambarus alleni is native to Florida. Its range covers east of St. Johns River and most of Florida from Levy County and Marion County southwards and continues further into some of the Florida Keys.

The blue crayfish loves to feed on tubiflex and mosquito larvae. This omnivore also prefers to eat worms at times. However, it has been observed that it will not eat the small fish inside the aquarium.

Procambarus alleni is one such species that is highly popular and widely sold in the aquarium trade. Here are some important points and requirements that you are to keep in mind if you have plans to get one in your aquarium. 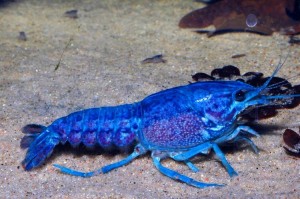 Water: Water pH of 6.5-8.5 is considered ideal for the survival of the procambarus alleni. It is necessary to remember that water temperatures are to be maintained at 65-68 Degree Fahrenheit.

Please note that this species cannot withstand the presence of ammonia and nitrites content in the water. Apart from this the blue crayfish is observed to be ahardy species that can survive and adjust to any kind of changes.

Aquarium Setup: A 30 gallons aquarium is appropriate for a single blue crayfish. The tank cover should be tight enough that the species cannot escape out of it. Making holes in the tank cover should also be avoided as these creatures have a tendency to clamp onto cords and eventually climb out of it.

Make sure there is enough hiding places for this species that seeks to remain hidden in dark spaces even during the day. Do not keep the procambarus alleni with big fishes as they might evade the crayfish. It is impossible for the larger and aggressive cichlids and the blue crayfish to dwell together under the same roof of the aquarium tank; the cichlids tend to attack and torment the crayfish.

Feeding: You can feed dead or dying fish to the blue crayfish. It will not hesitate when fed on wafers and crab bites. You can also feed some greens, peace or lettuce to these creatures occasionally.

While molting, the species tends to feed on its own molt that is believed to provide vital nutrients to the crayfish.

This species breed throughout the year without any specific season. The females carry hundreds of eggs in swimmerets or the area under her tail. 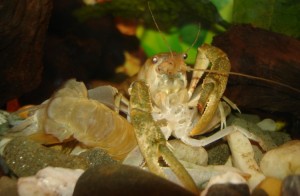 ‘Pregnant’ females will hide in a corner and tend to create a wall behind them. This hiding phase can go on for several weeks.

Let us take a look at some fun facts about this species.

This species are known to live for approximately 20 years.

Procambarus alleni is not an endangered species.

Take a look at some amazing pictures of the species known as the Procambarus alleni. 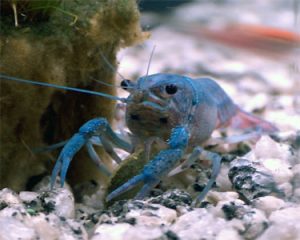 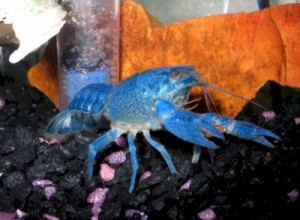 One response to “Procambarus Alleni”