Blue catfish is one of the largest species of the North American Catfish. The scientific name of this fish has a meaning in Greek, “Ictalurus” means “fish cat” and “furcatus” in Latin means “forked” which is because of the fish’s forked tail fin.

There are some other names of this Blue Catfish.

Let us read how these fork tailed fishes look like.

Skin: Their skin is smooth with no scales.

Color: The color is usually slate blue on the back, with white shading on the belly. Blue Catfish is mostly bluish grey, though they sometimes take on a silvery look.

Size: The size of the Blue Catfish is around 5.5 ft.

Weight: Blue Catfish usually attains the weight of twenty to forty pounds. Sometimes, this species of fish may reach weights of even hundred pounds.

Blue catfishes are inhabitant to major rivers of the Missouri, Ohio and Mississippi river basins. Their range extends in south through Texas, Mexico and towards northern Guatemala.

Blue catfishes are usually large-river fish, living in tributaries, lakes, main channels, reservoirs and banks of major river systems. They are inclined to move upstream during the summers to look for cooler temperatures and move downstream during the winters to find warmer water. They prefer to live in clear and swift waters.

They are found in gravel, over sand or rocky bottoms.

Let us check out the behavioral traits of this huge fish.

The diet of the fish mainly consists of live or freshly dead fishes. They are fond of small fish, clams, crayfish, frogs, mussels and insects. Large blue catfish often feeds exclusively on other fishes.

These fishes are one of the apex predators of the marine world. 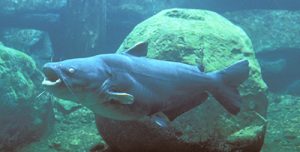 Most blue catfish do not mature sexually till they reach 24 inches in length. The spawning season for Blue catfish runs from June to early July when water temperatures first reach 70 to 75 F. They prefer to spawn in dark, isolated locations alike to those they live in. They mate in the months of April, May and June.

Males and females put in effort together to build a nest before depositing and fertilizing the eggs. These fishes build nest where the eggs are laid. They protect them from predators till the young catfish hatches. Blue Catfish are very productive. A large female can lay up to 20,00,00 eggs and possibly even more than that. They usually roam into more calm waters before building their nest and spawning.

The young are hatched in about a week while the male will guard the young for a week. The fry then swims away and remains on their own.

The young ones feed on aquatic insects and small fish. As they grow up, they develop fancy for crayfish, mussels and other fish.

Till the young ones attain one year, the size of the fishes reach something around 2.25 to 4 inches. Young ones school up after hatching.

Blue Catfish have a lifespan of something between 20 to 30 years.

Blue Catfishes need to be kept in very large aquariums or pond due to their huge size. In an aquarium or pond the water temperature should be between 25 to 28 degrees Celsius. The aquarium or pond should be ornamented with large rocks and the bottom should be covered with sand along with gravel.

Blue Catfish will prefer if the aquarium or pond is decked in such a way where there are hiding places in abundance. Keeping plants are not obligatory. A large filter should be provided to the catfish with adequate water movement.

Blue Catfishes are very easy to feed in aquariums as they will accept crab meat, fish meat, shrimp and mollusks.

Blue Catfish should not be kept with so small fish that they will be devoured. This is because of their predatory nature.

IUCN has not yet evaluated its Conservation Status.

Some very interesting facts are associated with this fish species.

Take a close look at the pictures of this huge catfish. 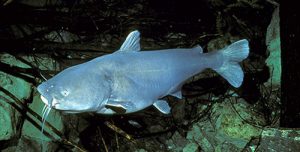