The brilliant coloration of this Shrimp makes them so popular for freshwater aquariums.

Color: Their natural coloration is green-brown. But, the red morph of this species is more popular. The females are more brightly colored compared to the males and they have a “saddle” marking on their backs when developing eggs.

These omnivorous Shrimps eat both organic and plant materials. They prefer algae, but they also feed on detritus and microscopic organisms. 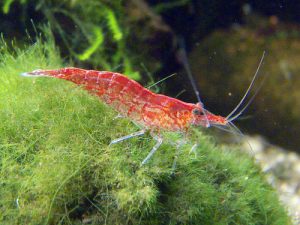 This species of Shrimp have the following behavior patterns:

Most large aquarium fishes like the Angel fish are known to prey on the Cherry Shrimp. Large invertebrates like crabs and many carnivorous Shrimps also feed on them.

They can adapt well to various water conditions. The Red Cherry Shrimp secretes a kind of mucus from their skin to protect themselves from various parasites and infections. This slimy secretion also helps them to move faster through the water.

Mating can take place any time of the year for these invertebrates.

It is very easy to breed them in captivity. They have very high reproduction rates. The eggs developing in the ovaries of the female Red Cherry Shrimps can be detected as yellow or white triangular “saddle” markings on their backs. The females release pheromones to signal their availability to the males. Female Cherry Shrimps lay the eggs after a brief mating process. They attach the eggs to their swimmerets for carrying them around until they hatch. These Shrimps circulate water over their eggs with the help of their legs. This ensures good health of the offspring.

The eggs turn darker in color gradually until they hatch after approximately three weeks. The newly hatched Shrimps are around 1 mm long. They look like miniature versions of the adults. This species do not have any planktonic larval stage. The baby Cherry Shrimps initially hide among rocks and plants where they feed on the biofilm on plant surfaces. After a few days, they emerge from their hiding places and start grazing on algae growing in their tank. 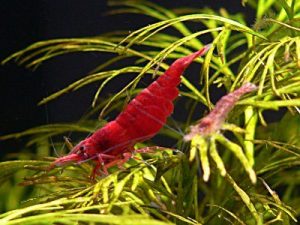 They have an average lifespan of 1 to 2 years.

These Shrimps occasionally shed their skin or exoskeleton. Their bodies turn a “u” shape as they attempt to touch their tails in order to molt. The molting happens very fast as they take less than a few seconds to come out of the old skin.

They are among the most popular Shrimps kept in freshwater aquarium. This hardy species is quite easy to take care of as it does not require much maintenance. Here is some information about keeping them as pets.

Housing: Two to four Shrimps can be kept in a 1.1 to 2.1 gallon (4 to 8 liters) aquarium. An 11 gallon (40 liters) tank can be sufficient for keeping an active colony. They should be provided with ample amounts of aquatic vegetation as they like to spend time sitting on them. They also hide in them, mainly after molting.

Water Plants: Plants like the Java fern and Java moss are excellent for their tanks as their required condition are similar to these Shrimps. They are also beneficial for the pet Shrimps and their green color provides a lovely contrast with the bright red Shrimps. Various water plants like water sprite, Ceratophyllum (hornwort), Elodea and water hyacinth can serve as natural water filters for removing nitrates while they also look beautiful in the aquariums.

Substrate: Their coloration depends on the background and tank substrate. They tend to become paler and transparent if their tank has light colored substrate. So, it is important to keep them in a tank with dark colored substrates so that they can develop their full color.

Water pH Level: The pH level of the tank water should be between 6.5 and 8.

Feeding: One can feed the Red Cherry Shrimps with any kind of aquarium food. But they prefer algae and like to eat compressed algae disks or algae wafers. They can occasionally be provided with blanched vegetables like spinach, zucchini (courgette), pea and baby carrots. Commercial fish or shrimp food that does not contain any copper can also be used. Copper is very harmful for this Shrimp species.

Temperament: These Shrimps are quite peaceful in nature and can be housed along with other peaceful Fishes and Shrimps.

Tank Mates: They are the primary target of large Fishes, mainly Cichlids like Angel fish, which are kept with them in the same tank. Fishes too small to eat the Shrimps also tend to harass and disturb them. These fishes may even bite the Shrimp’s limbs off. Adult Shrimps of this species can be kept together along with some non-aggressive fishes such as Otocinclus Catfish, Dwarf Rasbora, Dwarf Gouramis, Neon Tetra, Cardinal Tetra and some killifish species.

Breeding of the Cherry Shrimp should be done in isolation because any large fish is likely to eat the baby Shrimps.

Find out some interesting facts about this Shrimp:

Here are some images of this beautiful Shrimp. 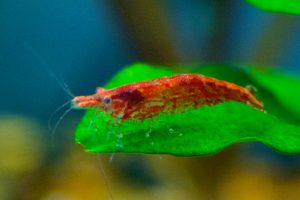