The Amano Shrimp is a very popular shrimp in the hobby. It is second in popularity to the Red Cherry Shrimp. The name Amano Shrimp originates from the well known aquarist Takashi Amano who frequently uses the shrimp in his aquariums as algae eaters. However most people do not know that the Amano Shrimp is a difficult shrimp to breed and that virtually all Amano Shrimp are caught in the wild and then sold to hobbyists. Captive breeding has been achieved but is rare.

The females are slightly bigger in size as compared to the males. The lower side of the female’s body is more stretched with distinct dashes that appear to look like a broken line. Males on the other hand, have a line of individual dots on the sides.

Amano shrimps tend to bear a close resemblance to the Ghost shrimps; however, amino shrimps appear to be more attractive with their fan like tails and dotted line.

Size: The Amano shrimp is about 5 centimeters (2 inches) long when it is fully grown.

Color: The body of these creatures is literally transparent with a reddish thin dotted line on each side. One can notice a white stripe running from the head to the tail, on the dorsal or upper side of the shrimp’s body.

These dots are ± 0.3 millimeter in size.

Tail: Its tail appears to be fan – like in shape. 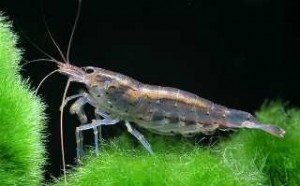 This shrimp is usually found in swamps and marsh lands. It is a common sight to find them in aquariums.

It is important to remember that the reproduction process of these shrimps is unique but there are some aspects of it that still remain unknown.

Amano shrimps require brackish water for successful breeding. The mating process between males and females is known to occur extremely fast in a matter of few seconds!

Male climbs over the female and releases the female as soon as it gets successful in depositing the sperm in the female’s abdomen. Females are frequently disturbed by males that are looking forward to mate. At times it may appear as though two shrimps are fighting when in actuality it is the male’s attempt to get the female to mate.

Several tiny undeveloped eggs are contained in the female’s ovaries; it goes y the term ‘saddle’. When these eggs are carried into the undercarriage they undergo the process of fertilization by the sperm that had been previously deposited by the male shrimp.

Unlike the case in most shrimps, the eggs of Amano shrimps hatch as tiny larvae (instead of miniature adults) that float in the water. The larvae are extremely delicate and are to be handled with extra care.

Breeding these shrimps in a home aquarium can be a tough job for aquarists. Water salinity is very important for the larvae to develop and grow. It has been found that apart from salt water conditions even special feeding is necessary for the fry or ‘zoes’ of Amano shrimps  In the beginning the zoes have to be put in salt water environment, following which they have to be put back to freshwater.

Once they turn into the adult size they tend to do well in any type of water. 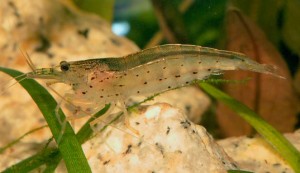 Shrimp taxonomists have stated that there is a chance of only 1 out of 100,000 zoes to survive and make it to adulthood in freshwater depending on the hardness of the water.

Amano shrimps are known to feed on algae; an explanation to their common name ‘algae eating shrimp’. However, its diet may also comprise of other soft plants.

The Amano Shrimp prefers planted aquariums. Slightly soft (GH 6-10dh) water is preferred (if the GH is too low they can’t make their carapace). They are extremely sensitive to ammonia and an excess of nitrate, and as such should only be added to a cycled tank. A small level of iodine in the water is recommended to help them molt. This can be supplied via normal fish food or via typical health food shop Kelp tablets.

This shrimp is not sensitive to nitrite levels due to the nature of their blood chemistry.[4]

Like most shrimp any presence of copper in the water (bar background traces) will kill them.

Amano shrimps seem to have righteously earned the term of ‘algae eating shrimps’. In fact these shrimps happen to be one among few species that readily consume the hard form of red algae called black brush algae.

However that does not mean that algae are the shrimp’s top favorite; rather it has been observed that it prefers fish food more than algae.

This species tend to visit the water surface more frequently if the water has high nitrate levels or due to lack of oxygen. Thus next time you notice such behavior you know what to do.

Molting is another trait associated with these shrimps. Amano shrimps tend to molt approximately once in every month; though it also depends on other factors including diet, age and environmental conditions. It has been observed that during this process, the shrimps tend to seek a hide-out thereby taking time for their shells to harden. The shrimps exhibit such behavior for safety reasons.

The average lifespan of the amino shrimp is around 1 – 3 years.

Here are some nice pictures of these invertebrate species called Amano shrimps. 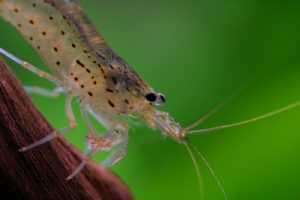 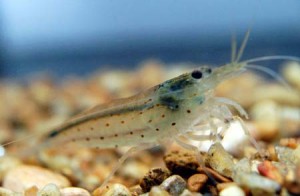 One response to “Amano Shrimp”