The Neon Tetra is a well-known breed of tropical fish originating in the South American waters. They are popular for their opalescent hues, and are also extremely famous among the fish aquarium hobbyists around the world. They fall under the small group of fishes (but not to be confused with black neon tetra, gold neon tetra, yellow neon tetra, diamond head neon tetra or cardinal tetra), and make great pets for beginners and new enthusiasts, adding color and activity to the aquarium. 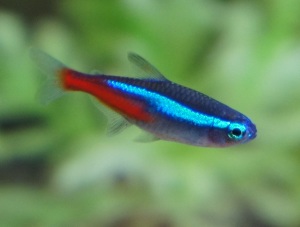 Size: The neon tetra can acquire a maximum size of 1.5 inches. Although, some individuals have been found to grow up to 2.5 inches.

Color: The most striking characteristic of the fish is its bright coloring, especially its greenish-blue iridescent hue. From its nose to the bottom of the adipose fin run two blue horizontal stripes dividing it into two equal horizontal halves. There are also two red stripes from the middle of the body down to its caudal fin, and most of the individuals develop an olive green sheen, that lines their back. The belly is of a silvery color.

Head and Body: Basically, the fish is totally transparent except for their colorful markings. All the internal organs, including the skeletal system, are visible through their transparent head and body. The neon tetras have a spindle-shaped body with a blunt nose.

Tail and Fins: The fish has the same number of fins like most other fish, but they are transparent, and so is its tail. Recent hybrids of these fish are available in a long-fin variety.

The neon tetra is distributed throughout the northern Latin America, including western Brazil, eastern Peru and southeastern Colombia. In the wild, the largest concentration of this fish may be found in the Amazon River Basin.

The neon tetras are freshwater fish. In its own region, they dwell in the warm, clear-water streams and rivers, in the wild. 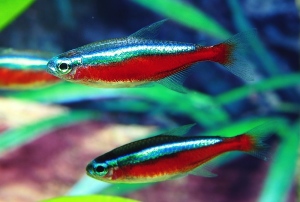 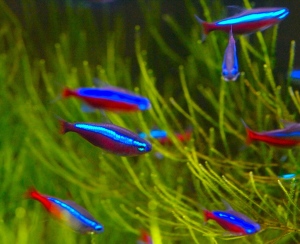 In the wild, the neon tetras are omnivorous. They feed upon insect larvae, algae and other tiny invertebrates.

These fish are peaceful and non-aggressive by nature. They are social and gregarious animals and live and roam around in shoals of at least a hundred individuals in the group. If a neon tetra happens to toss out of its shoal, it becomes very stressed and spends most of its time hiding and refrain from consuming food, which might in turn make it gradually fall sick. These tetras can at times shoal with its close relative, the cardinal tetra. Neon tetras love to live in such regions under water, where there is plenty of hiding places. They are non-aggressive. However, they might at times bicker amongst themselves, but that doesn’t lead to anything more than torn fins.

Bigger fishes can pose threat to the tiny, peace-loving neon tetras. Any other bigger carnivorous species of animals under water can as well prey upon the neon tetras.

The neon tetra has been seen to be living for as long as 10 years in captivity. However, the normal lifespan of these fish is between 5 and 8 years. 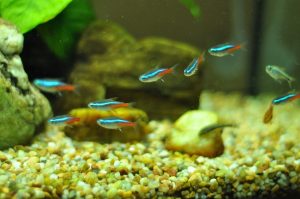 The Paracheirodon innesi is a hardy fish. Being a shoaling species of fish, they need to be kept in schools of at least 5 to 6 individuals in the aquarium, however, 10 or more is better and recommended. This not only enhances the beauty of the fish tank, but also keeps the creatures energetic and healthy. However, of late, the sudden-death rate of these fish inside the aquarium is strangely increasing. Also, it should be kept in mind that, the neon tetras must be kept in the water tank only with its compatible species.

Tank Size: An aquarium with at least 10 gallon capacity of water is recommended for the group of tetras to feel like at-home and play around freely.

Water type: Rain water is supposed to be the best for neon tetras, since rain water is often slightly acidic in nature, and these fish live in the waters which is tad acidic. The ideal water parameters for the tetras are:

Neon tetras are fresh water fish and the type of water should be soft, since extended exposure to hard water can affect the lifespan of the fish. 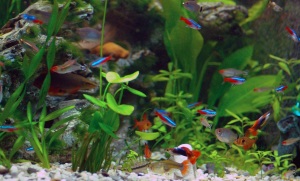 Temperature: The optimal temperature of the tank water should preferably be between 72 and 78 degrees Fahrenheit (22 to 26 degrees centigrade).

Salinity: 1 tablespoon per 2 to 10 gallons of water is enough for these fish.

Food: Being omnivores, the natural diet of an adult or jumbo neon tetra can be imitated by high quality flake food, frozen foods, blanched zucchini medallions etc. Frozen foods might include daphnia, brine shrimps and bloodworms. If live food is available in the pet store, black worms and fruit flies are also preferred by these tiny creatures. However, the fry has to be fed with live food.

Being a peace-loving breed of fish, the neon tetras go well with other peace-loving breeds. Due to their small size, the larger fish tend to simply eat them up. However, other species of tetras, some larger cichlids, some gouramis, rasboras, dwarf cichlids and most species of barbs and are their friends. Angelfish are their natural predators. Many species of them prey upon the neon tetras, but many don’t. The rule is unspecified. Neons falls under the diet list of some Giant Gouramis, as also some other larger Gouramis like Pearl, Opaline. Occasionally, Bettas (fighter fish) and Dwarf Gouramis have also been reported to prey upon the little ones. 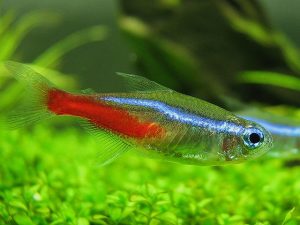 Neon tetras suffer from a common disease termed as the ‘neon tetra disease’, where parasite spores enter the body of the tetra. No cure of this disease could successfully be researched. This disease is infectious and mostly kills the affected fish, as also might affect all the other fish in the tank. Hence, if a tetra in the tank is affected by this disease, it should promptly be quarantined. Protozoan infection is also common among these fish.

Symptoms: In case a fish is affected by the disease, it would:

One or more of the above symptoms should alert the fish owner to take proper care of the affected fish.

Prevention: Water without sufficient friendly bacteria might often lead to such a painful situation for the fish since the everyday toxins that are collecting everyday by feces etc. continue to exist. To keep such situations away, precautions must be taken to keep the condition of the tank water healthy and suitable for the creatures dwelling inside. Adding Stress Zyme into the tank water might help to keep such situations under control. Salting the water might also help in keeping a check to the production and spread of these toxins and can keep the other species of fish safe from the affected fish. 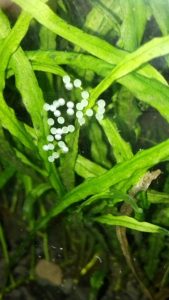 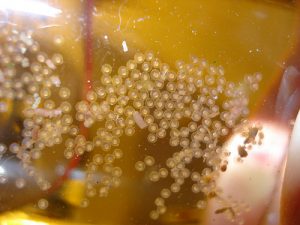 Difference: Neon Tetra Vs. Other Tetras

’Neon tetra’ is the name of several other variations too. However, these are not color variations, but are completely different species. The green neon tetra is a close relative to the blue neon tetras, but that, they have a green ‘neon’ stripe in place of blue. The glowlight tetra has a bright golden stripe. Similarly, cardinal tetra and the red neon tetra have a longer red stripe extending across the body, whereas the Black neon tetra has a glowing silver stripe upon black background.

The neon tetra has remained uncategorized by the IUCN 3.1.

One response to “Neon Tetra”