The Green Frog is a frog species that is generally larger than most frogs. These frogs are mostly found in the eastern half of the United States as well as Canada.

Its two recognized subspecies include the Bronze Frog and Northern Green Frog.

The green frog is identified to be a large frog. It has been noted that females are bigger in size, as compared to the males. The size of the tympanum and the eye is almost equal amidst females.

However males have a tympanum or ear drum that appears to be even bigger than their eyes; the male frogs also happen to have a bright yellow throat.

Color: This frog appears to be predominantly green in color. It is basically green to greenish brown dorsally with a few black spots. There are a few dark black stripes on its legs. Green frogs have a white belly. 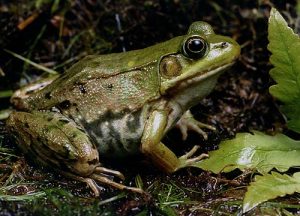 One will also notice prominent seam-like skin folds running down the sides of its back. This is one feature that distinctly distinguishes the green frog from its look-alike bull frog.

The loud and distinct call of the male green frog sounds exactly like a plucked banjo string. It is usually produced as a single note. The male frogs call from their territory and their call is a way of defending their territory.

The Green frog breeds in the eastern half of the United States and Canada. Its populations are especially concentrated in the southeast corner of Manitoba.

Green frogs can be found in a variety of shallow freshwater habitats including ponds, lakes, roadside ditches, streams, swamps, and brooks. These frogs instantaneously leap into the water on sensing danger.

These frogs feed on almost any prey that it can capture and fits its mouth. Their diet includes invertebrates, spiders, shrimp, fish, smaller frogs, snails, smaller snakes and tadpoles.

Green frog tadpoles are known to feed on algae and water plants.

The peak breeding season begins from April and continues till mid August. These frogs usually prefer semi-permanent or permanent freshwater as breeding grounds.

It is interesting to note that the male green frogs call for their mates from their own respective territories; they do not bunch up while calling for their mates as in the case of most frogs.

The actual act of mating occurs in a position where in the male grasps the female using his forelimbs, from her hind end or behind. During the act, the female frog releases her eggs while the male releases his sperms that get to the eggs for the process of fertilization to occur.

Females can lay up to 4000 eggs; the eggs are deposited in water and are usually attached to submerged vegetation.

The green frog tadpoles are identified to be olive green in color; however they may appear iridescent creamy white from below. The tadpoles metamorphose and turn into froglets in period involving more than a year (approximately 400 days).

Male frogs reach their sexual maturity by the time they are 1 year old; females take slightly longer and become sexually mature in around 2 – 3 years.

The adult green frogs mostly prefer to stay in water. However, the juveniles can be spotted over land especially when there is wet grass and soil. 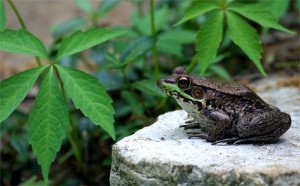 Green frogs are generally active during the daytime; though it is not unusual to hear their calls occasionally at night as well during the hot summer months.

Green frogs can be great as pets and these species are commercially sold in some states in the US. Let us take a look at some basic requirements that prove to be essential for your new pet friend.

Habitat: If you intend to keep one or two frogs, a 10-gallon aquarium is what you will require. It is important to remember that you need to increase the aquarium size if there are many frogs.

The aquarium should comprise of half land/ half water kind of a setup; similar to the natural habitat that these frogs are generally accustomed to.

There are few things that you cannot afford to miss when you set up the habitat for the green frog. Make sure to choose a soil or sphagnum moss and keep it damp. However, first things first so an aquarium without a top or cover can be fatal; the aquarium has to have a top so that the frog cannot escape.

A water dish (preferably 3 to 4 inches deep) will be excellent for your pet frog to go in; the water has to be changed regularly on a daily basis.

You are recommended to use logs or bark pieces that are large enough to serve as hiding places for your frog.

A UV fluorescent lamp can be used so that the frog can bask and derive its nutrients.

Tadpoles can be kept in water-filled aquariums.

Feeding: Your new pet friend will love to eat live crickets, earthworms, slugs, and crayfish. Tadpoles should be fed fish flakes, steamed vegetables, and zooplankton. Please note that it is not recommended to feed celery or salad to the tadpoles.

Hygiene: It is important to clean the tank at least once in a week. It is recommended to use 1% of bleach solution in order to clean the tank, but make sure to clean the tank thoroughly again to erase the foul smell of the bleach. Using a tank vacuum cleaner or turkey baster will make it convenient for you to pour the used and dirty water out of the tank.

It is also important to wash the rocks and furniture with hot water on a regular basis to destroy the germs.

Here are some fun facts about the Green Frog.

The green frog is known to enjoy a lifespan of approximately 5-8 years.

The green frog is not an endangered species.

Here are some spectacular pictures of the green frog. 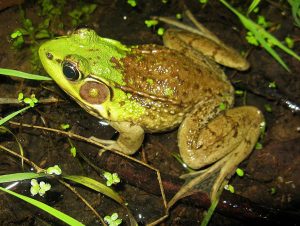 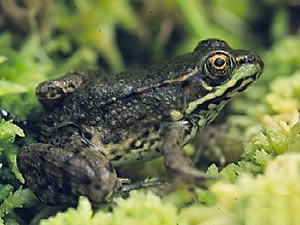