Procambarus clarkii, also known as Red Swamp Crayfish, is a freshwater crayfish species that is native to Northern America. They are known for their aggressive burrowing and can survive even if the water levels fluctuate drastically.

The crayfish is also known by other names like:

Adults grow about 3 – 5 inches in length and weigh around 50 – 80 grams. They are generally dark red in color with wedge-shaped black colored stripes in the abdomen region. They have moveable eyes and sharp snout on their head. Their cylindrical and segmented body is covered with thin and hard exoskeleton. They have five pairs of legs, out of which the first pair is a large pincher that is generally used for feeding purpose. The pinchers are generally narrow and long. They have long antennae which act as sensory organs for them. They also have five pairs of smaller appendages on the abdomen known as swimmerets. Its carapace is not separated from each other. 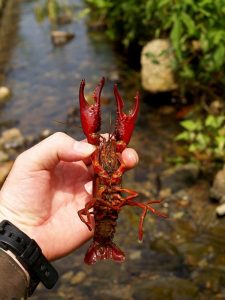 This species is native to South Central United States and North Eastern Mexico. Eastwards, their distribution goes up to Alabama, westwards it extends to Texas and towards north it goes to Illinois and Tennessee.

Outside its native range, this species has been introduced in various regions like Eastern Asia; Western, central and southern Europe; few regions of southern and eastern Africa and South and Central America. Till now, this creature has not been introduced to Antarctica and Australia.

Procambarus clarkii can be found in various kinds of freshwater habitats like streams, canals, lakes, slow moving rivers, swamps and marshes. They try to avoid streams and rivers having strong current.

During daytime, this creature hides itself under logs and rocks. They become active during night. This species molt their exoskeleton many times during their lifetime. They generally burrow to find food and moisture or sometimes just for playing with other arthropods. During the molting process, they do not engage themselves in the regular activity; rather they spend time in burrows. They generate a new exoskeleton under the old one. The newly generated soft endocuticle gets revealed once the old exoskeleton gets detached from the body. They go back to their regular activities once endocuticle gets hardened. This hardening process takes a lot of time.

This species can adapt and tolerate a wide range of aquatic conditions that includes extreme temperatures, low oxygen levels, moderate salinity and pollution. This creature thrives in shallow and warm wetland. It is preyed upon by fishes in large water bodies; hence they do not inhabit such large water bodies. During extreme cold and draught conditions, Procambarus clarkii hides itself in a burrow for survival.

Their breeding season starts in late autumn. If the climate permits, they can breed twice in a single year. Location of gonads is similar in both males and females. Testes are generally white in color, whereas ovaries are generally orange. Male releases the sperm cells by a pore at the base of the fifth pair of legs. Sperm enters the female body by the third pair of their walking legs. Eggs are fertilized internally. The number of eggs, produced by a female depends on the size of that female. Large female scan produce more than 500 eggs at a time. Newly hatched generally stay with their mothers for about two months. They go through the molting process before they become mature to fend for themselves. This crayfish reaches their maturity within three months. A recent research shows that this species may also reproduce by parthenogenesis. 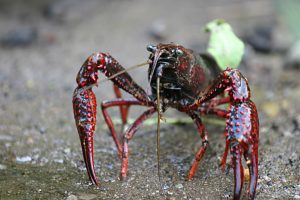 In its natural habitat, they live for around 3 to 5 years.

This crayfish is preyed upon by large or medium sized fishes. At times their eggs are eaten up by fishes and large amphibians.

Procambarus clarkii is a carnivorous species. They feed on snails, tadpoles and insect larvae. When they face a scarcity of natural food resources, they are known to feed on worms and the remains of dead animals.

This highly invasive species is confronted by ant threats. They are considered as Least Concerned by the International Union for Conservation of Nature (IUCN).

Here are some pictures of this creature: 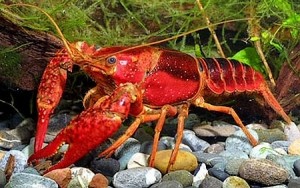 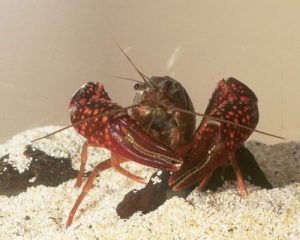