The Phainopepla (pronunciation: fain-o-PEP-la), also known as the Northern Phainopepla, is a crested songbird with a long tail found in parts of the United States and Mexico. These glossy black passerines fall under the ‘silky flycatcher’ bird group, and are known for their ability to imitate or mimicry many other bird species.

Body/Fur/Feather: With a tall crest and a long tail, the slender body feathers of the male are glossy black with white wing patches or edging that are visible only when it flies. The female is dull gray with even lighter gray wing patches (sexual dimorphism). 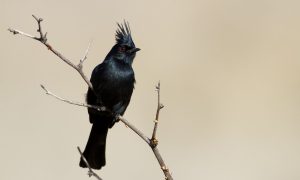 Bills/Beaks: Short and thin that are adapted to eat the tender fruits of the mistletoes.

Eyes: Completely red for both the sexes, but the females seem to have a shade brighter.

Legs: The feet and legs are completely black with thin, nailed claws that can easily grip the tree branches they perch on.

Because these black birds are rarely seen, it is tough to study them. There is no official record of the exact lifespan of these passerines. 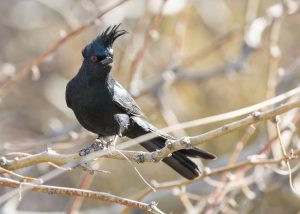 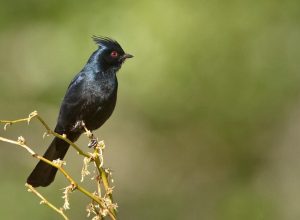 Habitat: Where do Phainopeplas live

They are spread throughout the desert ecosystems, especially riparian woodlands, in washes, chaparral, and other regions that support arid scrubs. The populations that are found close to the coastal areas prefer oak and riparian oak forests.

These birds are diurnal and solitary, and are hard to find except for foraging, when they gather in flocks of hundreds. At other times, each individual would defend a few mistletoe trees in an attempt to drive away any other fruit-eating birds.

While searching for food, they would perch on top of shrubs and trees and usually flock around their main food source, the mistletoe trees, the berry of which they mostly consume. In fact, these birds have an important role in the biome since these trees are also dependent on the phainopeplas to carry on with their process of reproduction.

The birds would consume the fruits and pass the unharmed seeds of this parasitic plant through their droppings, which eventually fall on the branches of other trees and germinate into saplings. 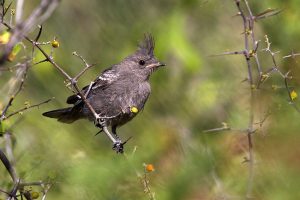 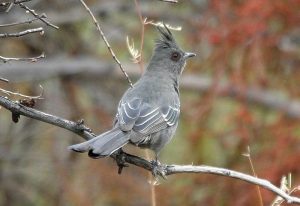 The song of the phainopepla has a complex note with at least 14 different identifiable elements. Their common calls include an up-slurred whistled hoooeet, a low quirk, and sometimes short warbled songs. However, they have also been seen imitating the calls of at least twelve other species, including the northern flicker and the red-tailed hawk.

Phainopeplas are non-migratory; though some populations seem to disperse locally at a distance of less than 200 km during a particular time of the year.

Diet: What Do Phainopeplas Eat

They are primarily herbivores, but have bizarre eating habits. As mentioned, these birds almost solely depend on mistletoe berries, though at times, they would consume fruits, vegetables, and other berries too, including elder, buckthorn, juniper, pepper berries etc. They would also consume caterpillars and flying insects like beetles, flies, and true bugs especially during the warmer months.

The phainopepla breeds twice a year in two different habitats. During courtship, the male phainopepla may chase the female, flying, and when they perch onto a branch, the female would be fed by the male as a part of the ritual.

After mating, usually the male would build their nest in the springtime. It is usually placed in center of a clump of mistletoes or in a fork of branches, so as to keep it hidden from the eyes of the predators. The height of the nest from the ground level varies with habitat. It is built typically low, at about 4 to 12 feet in desert mesquites, and higher above to even around 50 feet close to stream sides, preferably atop sycamore or oak trees.

The nest is a small and shallow cup made of leaves, plant fibers, weeds, twigs, etc., and is bound together with cobwebs and even lined with plant down and animal fur. 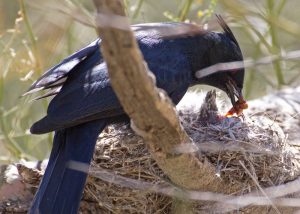 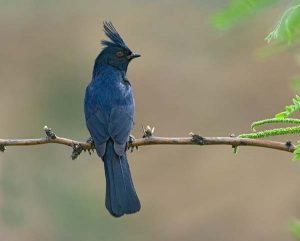 Life Cycle of the Baby Phainopeplas

The eggs that are laid, are pink or gray, and are speckled. Both the parents would incubate the eggs, with the male spending more time during the day. The eggs take around 2 weeks to hatch. The young ones are reared by the father and the mother for up to nineteen days more during which the father would keep flying over the nesting area from time to time, in zigzags and circles.

The mother lays 2-4 eggs at a time (clutch size), which are round, slightly grayish, having tiny dark speckles. When hatched out, the babies are helpless, having sparse white down and grayish black skin. When the juveniles begin to grow up, they resemble more like an adult female with brownish down and brown eyes.

At first, they are fed usually with crushed insects, but also berries, as they keep growing. The baby birds would leave their nest after around 19-20 days from hatching. 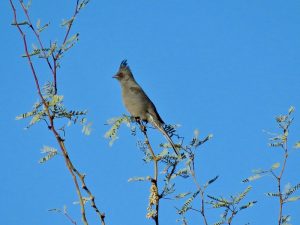 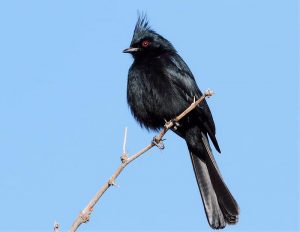 Local snakes, larger birds of prey and carnivorous mammals are the primary enemies to these passerines.

The population of these birds is quite stable, and the IUCN 3.1 has categorized them under their ‘Least Concern’ (LC) group. 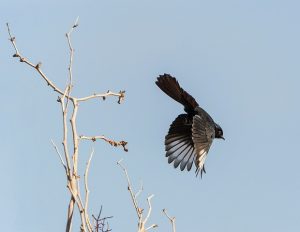 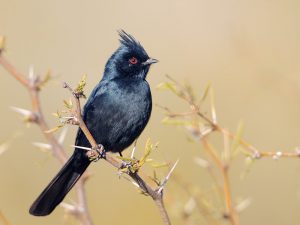