The Loggerhead Shrike (pronunciation: ‘law-ger-hed shrIke’) is the only known predatory songbird. This medium-sized, gray passerine is abundantly spread all across its habitat in the US, and is the smaller and darker type of the two species of shrikes found in North America. In recent years, there is a decline in their numbers, though the exact reason is yet to be studied. In their habitat, these birds are most common in the state of Florida.

Size: Medium size bird measuring about 9 inches in length from its bill to tail.

Weight: An adult and healthy shrike weighs between 45 and 60 grams. The average weight is 50 grams. 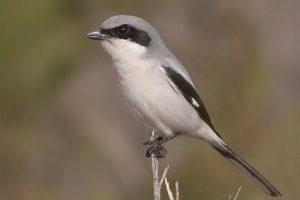 Plumage/Body Feathers: Its underside is gray while the back is a shade of darker gray. There is a wide black mask across its face. By color, there is very little sexual dimorphism in these passerines.

Wings: The wings are pitch black contrasted with white patches.

Tail: Their tails are black with white corners.

Eyes: The beadlike small eyes are round and black. They do not stand out, since they mix with the black mark on the bird’s face.

Bills/Beaks: The bills are heavy and hooked at the tip.

Average lifespan normally lies between 7 and 8 years. However, the longest-living Loggerhead Shrike recorded was a male from California that lived for almost 11 years and 9 months. However, it was released in 2010 by ornithologists.

The loggerhead shrikes are spread in the extreme southern British Columbia, southern Ontario, and southern Quebec, central Alberta, central Saskatchewan, southern Manitoba, south throughout the U.S. They spend the winter mostly in the southern part of its range. 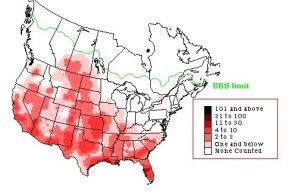 Habitat: Where do Loggerhead Shrikes live

This bird mostly live in open or semi-open environments like agricultural fields, scrubland, wooded savanna, pastures or other grasslands with scattered low trees and shrubs that are often spiny and multi-branched. They also prefer areas of exposed bedrock with short grass. They are even found in mowed roadsides, golf courses, cemeteries and parks. These are not migratory birds, though some local migrations do occur especially during winter.

Based on location, a total of 11 subspecies of the loggerhead shrike have been recognized by the researchers: 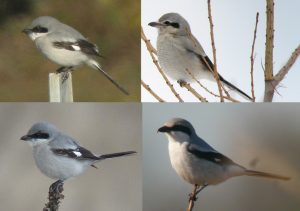 The loggerhead shrike generally sits on an exposed perch to keep an eye on a prey, and when found, it flies down and catches it. However, it might also hover around to forage for food either close to the ground or catching insects midair. When the bird flies, it used bursts of rapid wing-beats. If the prey is small, the bird will consume it on the spot, but if large, the prey would be carried back to its perch, often held in the bird’s feet. Soon after, the shrike would rip it apart after impaling the prey on a sharp object like a barbed wire, thorn, or a tree fork.

The loggerhead bird is territorial. They would maintain their territories mostly through displays and songs. Just before the arrival of the winter, when there is a scarcity of food, the bird would also store its food by impaling the prey. This process is also repeated during breeding, when the bird is in need of high energy.

A strange behavior has been noticed in the newly-fledged young. They are often seen performing fake versions of the hunting behavior in the adults. It has been noticed that the chicks are pecking on inanimate objects, practicing chases in the air without a targeted prey, flying around holding twigs or leaves by their beaks, displaying gestures of impaling the prey, or even chasing their parents. This is primarily an imitation. 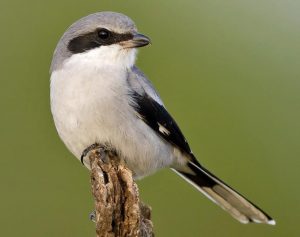 The general call of these birds is “queedle- queedle”. An alarmed loggerhead shrike will emit a call that sounds like “schgra-a-a”. Newly-hatched baby birds will make “tcheek” and “tsp” sounds. Females would emit begging notes, asking for food with “mak”, while the male birds would make a “wuut” or a “shack” sound, while offering food.

Diet: What Do Loggerhead Shrikes Eat

The loggerhead shrikes prey upon creatures of size ranging between 0.001 g to 25 g. Their primary staple diet includes insects like grasshoppers, but they would also eat reptiles like lizards, arachnids, amphibians, small birds, rodents, and even small mammals like bats. 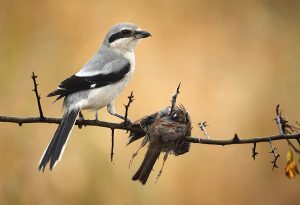 These birds are primarily monogamous. However, the females of the species, at times, change mating partners to raise a second brood in the same mating season, which falls between February and July. The birds in the southern regions may raise up to 3 broods in a year.

The male will often be seen hunting for prey it does not otherwise need to. This is only a display of power to attract a female seeking a dominant male. Before mating, the males would perform a ritual dance, sometimes along with a display of flight, as well as feeding and singing the female. A male bird’s larder with a good provision of food can also attract a female. The reproductive intercourse takes place a short time after in the northern parts of their range, and in the mountainous regions. 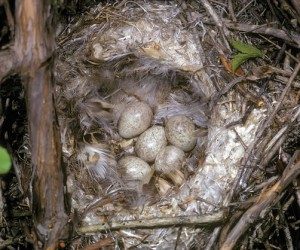 The male helps the female during nesting. The nests are constructed anywhere between 5 and 30 feet above the ground on shrubs, thorny trees, where the nest would remain well-hidden by foliage. The nest shapes like a thick cup, and is built using grass, bark strips, and sticks, lined with feathers, animal hair, plant fibers, moss, grass, small roots, and even man-made items like cloth, paper, etc.

As the eggs are laid, the mother bird incubates the clutch for about 15-17 days. The clutch size is 1 to 9, and the eggs are gray white to pale buff having brown and gray spots that are often concentrated at the large end. During incubation, the father bird feeds the mother. 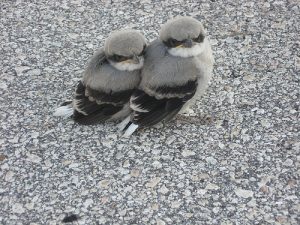 When the baby loggerhead shrikes are born, both parents feed the nestlings. The babies would depend on the adults, until they are able to leave their nest after 16-21 days. They finally learn to become independent by around the fourth week from birth. However, the parents would often accompany them until they are about 3 months old. The juveniles attain adulthood and breed for the first time when they are about a year old. 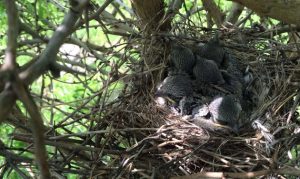 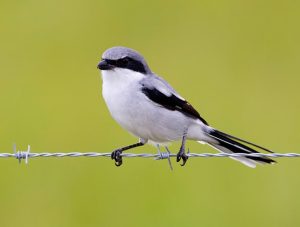 In their region, the most common enemies of these birds are weasels, magpies, snakes, cats, and crows. 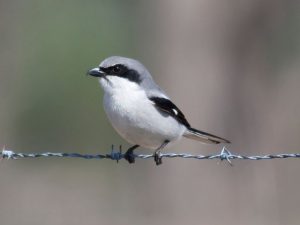 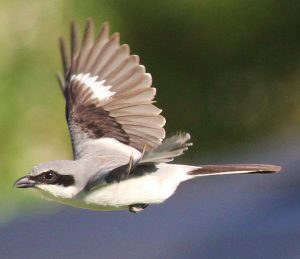 Though the population of these passerines is not highly stable, the Loggerhead Shrikes are not at risk or are ‘endangered’. The IUCN 3.1 has categorized them under the LC (‘Least Concerned’) species list. 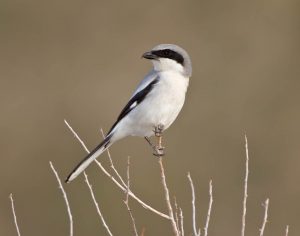