The Great Crested Flycatcher is a common insectivorous bird from the ‘flycatcher’ family and is indigenous across a wide range in North America. These large birds are known for their coloration and melodious tunes. Bird lovers in their region often make nest boxes in the gardens for them to come and breed. The head of the Great Crested Flycatcher has a short, blunt crest from which it gets its name.

These birds do not display any kind of sexual dimorphism, either by size or by coloration.

Body & Head: Like most other flycatcher species, they have a sturdy build, broad shoulders, a large crested head, and a long tail.

Bills/Beaks: The bills are hard, pointed and black, and at times might show a pale color at the base. 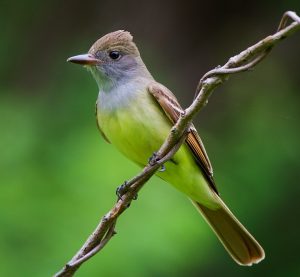 Eyes: The eyes are small and shiny, and look completely black from a distance.

Feet: The long digits of the claw help the bird to have a firm grip of the branches on which they sit.

Feather Colors (Coloration): The back (dorsal) feathers are reddish-brown, while the fine down covering the head and face is brownish to gray. The feathers in the throat and breast regions are bluish-gray in color, and those on the belly have a bright lemon-yellow hue. The brownish upper parts of the body, as well as the tail feathers, are highlighted in orange flashes.

The bird is native to North America and can be found in almost all the areas of the eastern and mid-western regions of the continent. Currently, no regional subspecies of this bird has been defined by the biologists.

The Great Crested Flycatchers are found in the woodlands and groves of the deciduous or mixed forests, amidst edges of clearings, abandoned orchards, continuous dense vegetation, or open wooded regions. During winter migration in the tropics, they would usually choose forest edges or secondary growths. 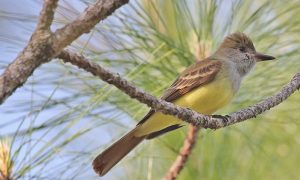 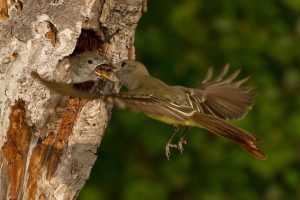 These birds are primarily migrants, traveling between North and Central or South America, twice a year. Except during the time of nocturnal migration, the Great Crested Flycatchers are diurnal, i.e., active during the daytime, mostly during dawn and dusk.

The birds are expert flyers, possessing the inborn expertise of catching their prey in flight. Seldom do these birds come down at the ground level, spending most of the time perching atop giant canopy trees or flying helter-skelter. The Great-crested Flycatchers have a swift, direct, buoyant and powerful flight pattern.

While migrating, the birds do not travel in large groups, but either alone, or in pairs. Great Crested Flycatchers are socially monogamous and would keep reforming their duo in the following years, provided both the partners survive the chilly winter.

Sounds & Songs: How does the Great Crested Flycatcher Call

These birds communicate with each other using a wide variety of tones. Just before sunrise, the male will emit a ‘wheerreep’ followed by a high-pitch ‘whee’, as also, a soft ‘churr’, addressing its mate. This is called the ‘dawn song’. The neighbors will emit a quick ‘huit, huit, huit’ at each other during some moment of exciment or even stress.

During fights, territorial feuds, or when a predator is seen approaching, loud and repetitive notes of harsh sounds are also heard amongst neighbors. A family, comprising of the parents and the young ones, would use a single-noted ‘ whee-eep’ to interact with each other. 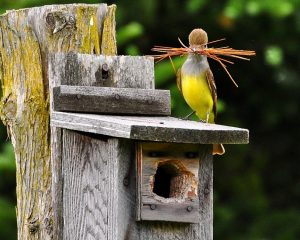 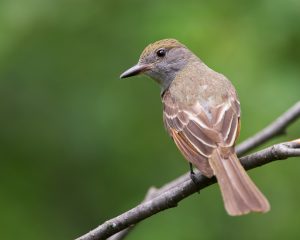 As the breeding season arrives (falling between March and April for the southern population, and May to June for the northern), both the male and the female Great Crested Flycatchers would turn highly territorial, aggressively attacking and chasing other individuals from the same or different bird species.

After choosing a partner and eventual mating, the male of the species dedicatedly spends its time and energy, guarding its breeding territory, while the female would stay involved building their nest inside tree holes, and taking care of the clutch of eggs, and subsequently, the young birds.

The female great crested flycatchers lay a clutch of 4 to 8 eggs at a time. The eggs are incubated only by the mother, while the father would move out in search of food to feed its partner. It takes about two weeks for the nestlings to break out, while they are born helpless and depend entirely upon parental care.

At this time, both the parents would work simultaneously to feed the juveniles with a diet dominated mostly by insects. However, it’s the female that would make more frequent visits to bring food for the babies. The hatchlings typically take about two weeks for fledging, after which, they gradually learn to fly within 12-18 days with the help of their parents. 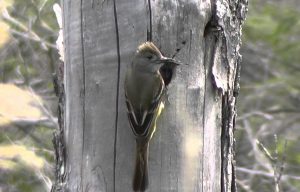 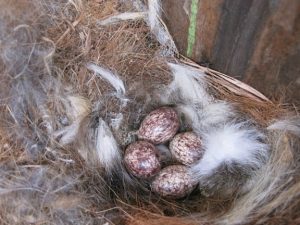 Though they are omnivorous, the very name of the species is self-explanatory to their primary feeding habits. The diet of these mostly insectivorous birds consists of different kinds of flies, as well as insects, including moths, butterflies, crickets, bees, beetles, grasshoppers, wasps, and even spiders and caterpillars.

They will also eat small reptiles like tiny lizards, as also, various kinds of worms and other terrestrial non-insect arthropods. However, they would also consume fruits and berries from time to time, especially during the winter months.

The most frequent predators of these birds are different kinds of snakes, especially corn snakes, indigo snakes, and yellow rat snakes that have been seen feasting upon the eggs, chicks, and also the adult birds. However, predation usually occurs during the nesting season, when it is easier to get the eggs and the juveniles.

The current population of the Great Crested Flycatcher birds is stable, and hence, the IUCN 3.1 Red List has included them in their LC (‘Least Concern’) category. 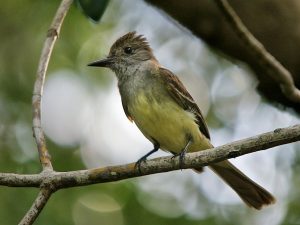 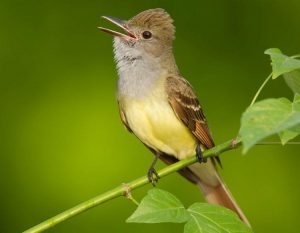