Acadian flycatchers are small insectivorous songbirds found in North America. All members of its genus were considered to be a single species before further research revealed that all of them had distinct calls, range, and habitats. 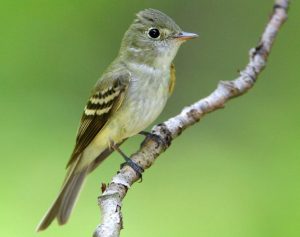 Color: This bird is mostly olive with a white to a yellowish belly and flanks. There are usually two white bars on the wings, black upper beak and a yellowish to pink lower one. They also have a thin white ring around each eye. Juveniles are more brownish than adults, and their wing bars are a dark buff.

They can be found across the eastern United States and southwestern Ontario. They migrate to southern Central America and northern South America through the Caribbean and eastern Mexico.

They mainly live in deciduous forests near bodies of water. 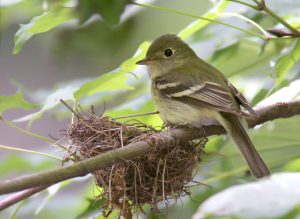 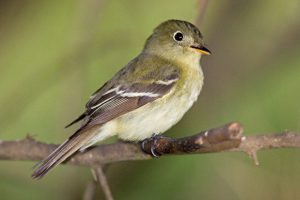 They primarily eat insects like flies, mosquitoes, moths, flying ants, small beetles, and spiders. They employ a technique called hawking where they sit and wait on a perch before flying out and taking an insect in mid-flight. They also sometimes catch insects from foliage while they hover. Acadian flycatchers may also eat seeds and berries.

Acadian flycatchers are monogamous, and the pairs usually return to the same nesting sites for multiple seasons. The breeding season usually falls between May and August. Females have up to two broods per season, with each brood producing 2-4 eggs. The incubation period lasts for about 2 weeks.

The hatchlings are born helpless and are looked after by the parents. They usually fledge after around 15 days, after which, if the mother starts to incubate another clutch, the fledglings become the responsibility of the father, but if the mother is free, then both parents keep on caring for them for another 12 days.

They become sexually mature at around 1 year of age. 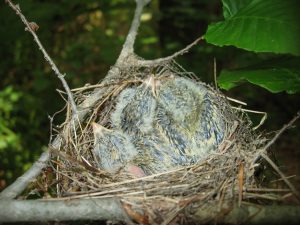 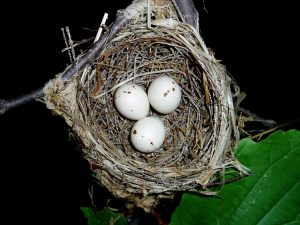 Being songbirds, they have a distinct ‘peet-sah’ and ‘tee-chup’. Males use songs to demarcate their territory. Their songs vary depending on the time of the day. 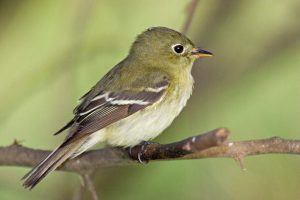 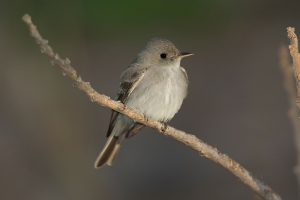 IUCN lists the Acadian flycatcher under their ‘Least Concern’ category. 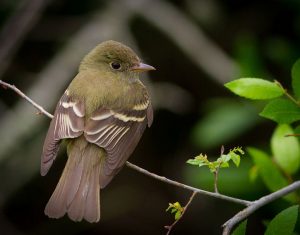 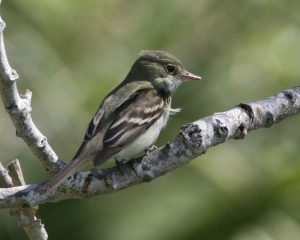