The Killdeer bird is a plover that technically falls under the shorebird group found in and around North America. However, these medium-sized, tawny brown birds mostly nestle far away from water bodies and are common to grass lawns, fields, golf courses and garages or parking spaces. The killdeer seems to have got adapted to human disturbance. The killdeers are well-known for their behavioral example of distraction display. 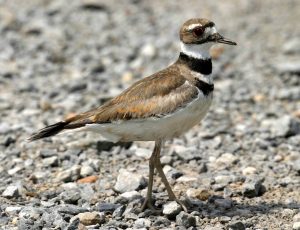 Weight: The maximum weight of these birds has been recorded to be 88 grams (average).

Head: The killdeer has a typical round head that is a mixture of white and brown.

Feather and Color: The feathers at their back (top) are brownish to tan. The feathers on their belly (underside) are white with two black bands separating their chest from their neck. Their rump is bright orange.

Wings: Their wings are sleek and slender with white stripes that are visible only when the bird is on a flight.

Tail: Their brownish tail is long, pointed and slender and is black at the tip, with a white terminal band. 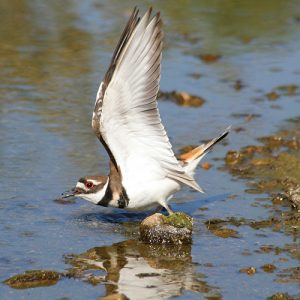 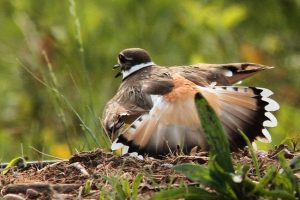 Bill: Their thin bill is black, short and straight, but sharp at the tip. The shape of their beak is all-purpose.

Eyes: The eyes of these birds are large, bright and round with an additional black band encircling over the eyes (resembling eyebrows). They have a thin but prominent red border surrounding their eyes.

Feet: Their feet are extraordinary – thin and proportionately longer than most other medium-sized birds and are mostly flesh colored, or at times, yellow. 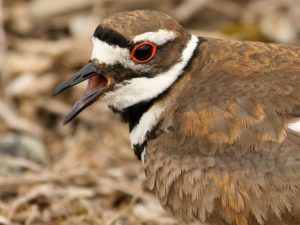 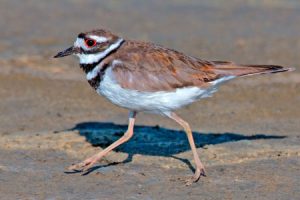 Three subspecies have been distinguished by the National Geographic Society (Field Guide to the Birds of North America) differentiated by their varying plumage and colorations: 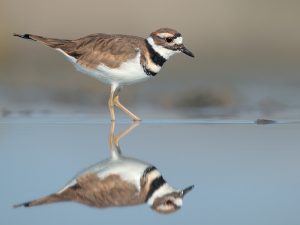 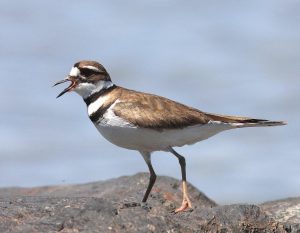 The killdeers get along well with humans. As mentioned, these shorebirds are least associated to water (unlike their names) and can even be found in uplands that are far away from water. They are found in fields and playgrounds, mudflats, rooftops, unpaved roads, sandbars, parking lots, meadows, gravel bars, croplands, short-grass prairies and pastures, and around all places inhabited by man. However, by virtue of their instinct, they also appreciate water edges and are found hovering around lakes, ponds, rivers and other wetlands.

Killdeers are mostly resident birds. Those that migrate would only cover a medium distance. Some of the birds from the northern regions would spend the winter in Mexico. Migration peaks in the month of April. Many of these birds would fly down south only as far as they must just for the sake of finding open water and food. These plovers are present in Washington round the year, especially to the west of the Cascades. However, during the winter, most members of the species would leave the intermountain interior. Those that migrate would return between February and March and would continue to stay again until October or November. 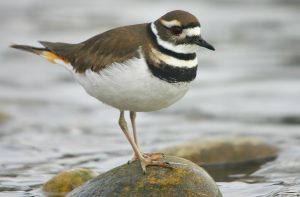 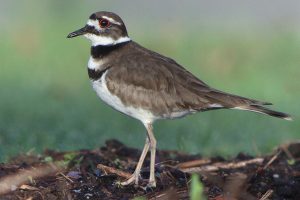 These birds are known for a distraction display termed as the “broken-wing act” just to divert predators and trespassers away from their nests. They would walk away from their nest area and spread their wings that would look like being broken just to make themselves look like injured. In this way, they would make the predators believe that, it would be easy to prey upon the wounded bird, and thus tricking them away from their nests. These birds often run around the ground in speed and would suddenly stop and look around, running on again. This behavior is mainly to look around for predators, or to startle their preys. Killdeers are not gregarious, but move around mostly alone, if not paired with the opposite sex. However, they do make small flocks during migration. They are territorial and would defend their territories with their pairs, mostly during the breeding season. They are very vocal, and if provoked, they would fly away up above and fly in circles, giving out loud alarm calls.

Diet: What do Killdeer Birds eat

Killdeers mainly live on insects. However, they eat plant parts like berries and weed seeds too. Being a shorebird, they also feast upon crustaceans. Grasshoppers, beetles, earthworms, snails, caterpillars, insect larvae, spiders, earthworms, centipedes, crayfish and other terrestrial invertebrates constitute a large part of their diets. Occasionally, they consume small vertebrates as well. 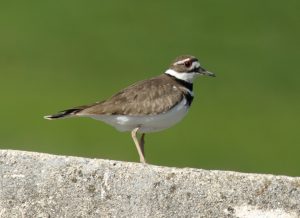 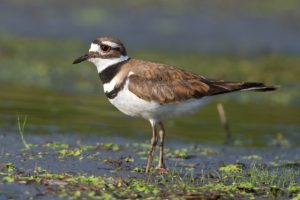 Killdeers are talkative and noisy. Their calls are shrill and high-pitched. Although not categorized as a song-bird, their characteristic calls, sounding like “kill-dee”, “kill-deeah-dee-dee” or kill—deer’’, have got them their name. 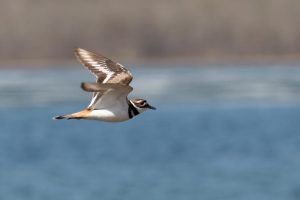 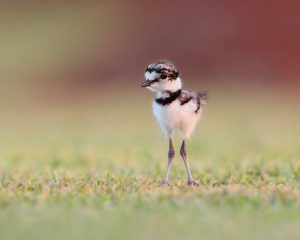 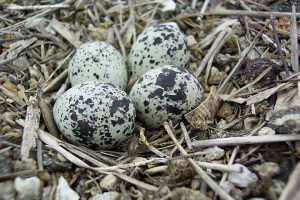 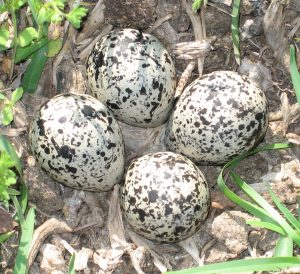 Both the adult killdeer and the young chicks, and even the eggs, are vulnerable to different kinds of predators. However, they do not have any breed specific predators, but general predators of most of the medium-size birds like the bigger birds of prey, the shore-side gulls, ravens and crows, foxes, domestic cats and dogs, skunks, Virginia opossums, coyotes, snakes, raccoons etc. mainly prey upon them.

The average lifespan of the killdeers is 3 to 5 years, however, killdeer birds have been recorded to live for as long as 10 years. 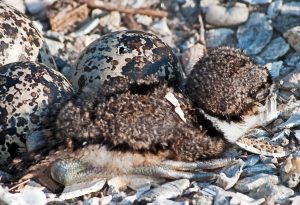 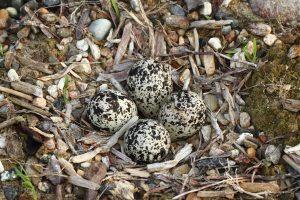 The generally monogamous killdeer bird usually begins searching for its mate during springtime, and would even spend the rest of their life (or a few years on the go) together. To get its mate, the male bird will initially find out a territory for nesting and then move on to find its mate by means of different aerial displays. It would emit a series of two-noted calls for hours at a stretch to woo its female. After their mating rituals (‘scrape ceremony’) and eventual mating, the female would lay its eggs in its nest, which is nothing more than a shallow depression or bowl in the ground, 3-3.5 inches across, fringed by grass blades and pebbles. The gestation period of the female is 24-28 days, after which the babies hatch out upon normal incubation. 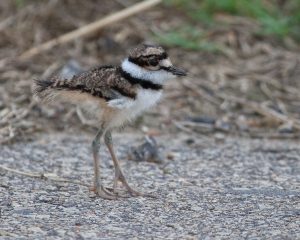 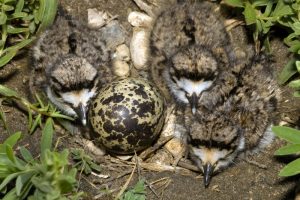 Life Cycle of the Baby Killdeer

The juvenile or baby killdeers almost look the same like their adult counterparts except that, they are smaller by size. Among the two major types of hatchlings, the killdeer babies (like the chicks of hens, ducks, quails etc.) fall under category ‘precocial’ (the other category being ‘atricial’ that includes such hatchlings that are completely dependent upon their parents to survive). They rarely depend upon their parents for food, but they move out with their parents instead for foraging. The hatchlings come out of their eggs with eyes open and much developed. 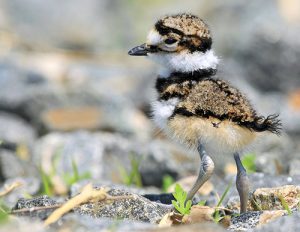 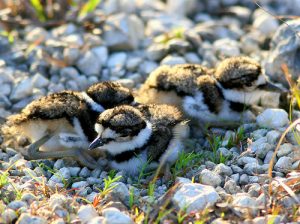 Because of its increasingly high population, the killdeer has been listed by the IUCN 3.1 as “Least Concern”.

One response to “Killdeer”