Pygmy Marmoset is the smallest living true monkey in the world, found in the South American western Amazon Basin rainforests. These new world monkeys are one of the smallest primates in the world, being viewed as different from other species of typical marmosets. Hence, they have been accorded in a genus of their own, Cebuella, categorized under family ‘Callitrichidae’. 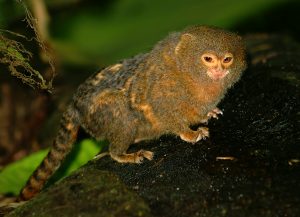 Color: The color of the fur of these creatures covering their body is a combination of black, gray and golden brown on its head and back. Their underparts are tawny, orange and yellow. Their tail has black rings on them and their face has white flecks on their cheeks with a white vertical line in between the eyes.

The subspecies vary slightly in color and are only separated by geographical boundaries. 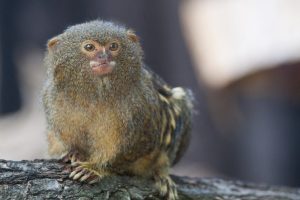 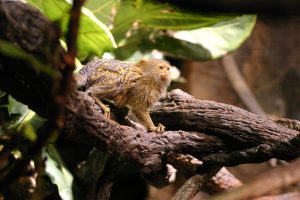 The pygmy marmosets are widely spread across the Amazon rain forests in Brazil, Peru, Bolivia, Colombia and Ecuador.

Pygmy marmosets live in the dense regions of the evergreen forests, where there is abundant availability of food trees. These creatures love the sight of water, and hence, are often seem to be dwelling mostly in the areas close to the river. 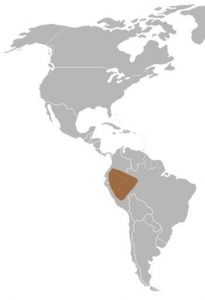 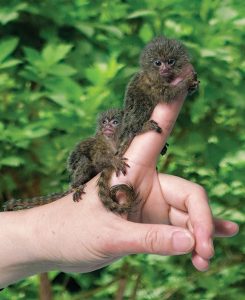 What Do Pygmy Marmosets Eat

The pygmy marmoset mostly lives on tree gum, resin, sap, latex etc. For this, they make holes on the bark of the sap-producing plants, vines and trees by their special set of teeth made for the purpose. They lick the secretion coming out of the tree with its tongue. Insects, especially butterflies, get attracted to this secretion and also falls a prey to the marmoset’s appetite. However, at times, they also feed on spiders, small insects like grasshoppers etc. Nectar and fruit are also a part of the diet of the marmoset monkeys. 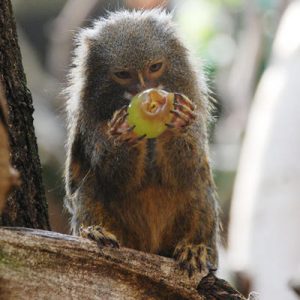 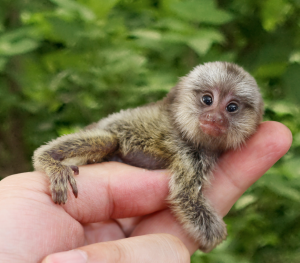 The sounds and calls made by these monkeys are usually for inter-group communication. At least 10 different sounds have been identified for their vocal communication. Among the common ones, a trill sound is used while communicating with other members of the family, including during feeding, which can be even over a long distance, while, a click sound and a high-pitch whistle are used for warning for impending threats and communicating danger, and so on. Other than sounds, the pygmy marmoset also use other signals like visual displays, as also, chemical communication by body secretion scents from chest, from around the anus and the genitals, which also includes sexual signals.

Pygmy marmosets produce offspring every 5 to 6 months. These mammals breed during the female’s postpartum estrus, which falls around 3 weeks after giving birth. Breeding in pygmy marmosets does not appear to be restricted to any particular season. The gestation period of the female is 125 days. The average number of offspring of the monkeys in most cases is two, however, other than twins, the female rarely gives birth to triplets as well. Their average weaning day age is 91 days. The average age of sexual maturity and reproduction in the male and the female pygmy marmoset is 638 days and 684 days respectively. These monkeys are generally monogamous. 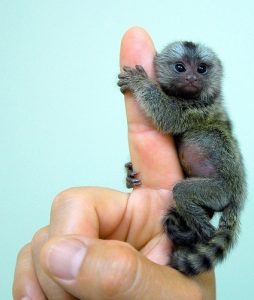 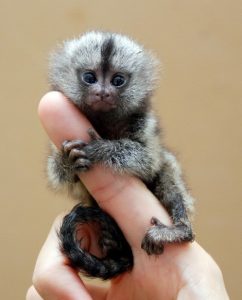 The small size of the pygmy marmoset monkey has made it potentially susceptible to predators like small felids, climbing snakes like pit vipers, and different birds of prey like hawks and eagles.

The average lifespan of the pygmy marmoset is 11-12 years in the wild. However, in captivity, they have been seen to be living up to 18.6 years. 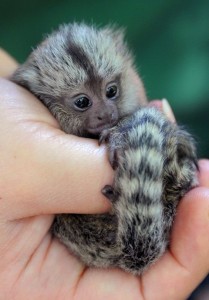 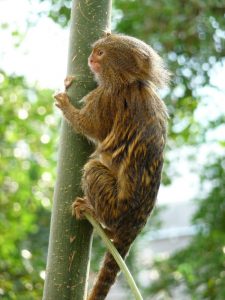 Despite being popular as cute-looking, pygmy marmoset monkeys are not very competent as pets for a few of their natural habits. Adult monkeys being quite unpredictable are hard to care for and it needs a lot of time for the same, especially while training them. These monkeys, when full grown, can often be quite aggressive by nature. Also, they are very expensive, and even the huge glass or wire cage needed for them too can be quite costly. Above all, these monkeys can’t be kept alone. They must be kept in group, or at least, with a second individual. Nevertheless, many people do adopt them. However, legal permission might be necessary before they are adopted as pets.

Cage: They need a large cage, with lots of swings, toys, towels and tunnels. The cage must also contain plants to create their wild environment. These monkeys need sunlight. So arrangements must also be made such that, sunlight can easily reach them, or else, a heating source like a 250-watt bulb or infrared lamp is necessary. The urine of these monkeys smells awful. So, the cage must regularly be cleaned, or else it might be very stinky and dirty.

Diet: The diet of these monkeys should be rich in Vitamin C and D3. Other than the canned biscuits available in the market for these monkeys, fruits (especially bananas and grapes), vegetables, eggs, pastas, cooked fish and meat, cereals, rice, and small insects can also be offered to these creatures, but in rotation, or else, they will easily get bored of their food. They also love sweet foods like cakes, melted ice creams, jelly etc.

Diseases and Vet Care: Pygmy marmosets are prone to catching cold. These monkeys can catch any human diseases. They can even catch diseases like cold sores, measles, chickenpox, and can even get contradicted with HIV. So, enough care should be taken when these mammals are kept as pets, and must immediately be taken to the primate vet, once they fall sick.

Pygmy marmoset monkeys are not endangered. Due to its high population in its own range and habitat, the IUCN 3.1 has categorized it under ‘Least Concern’ species list. 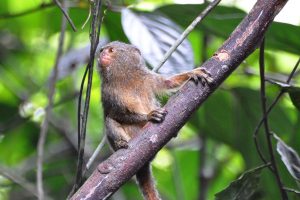 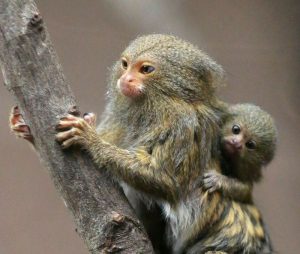