The Maned Wolf is a South American canine that is a unique species in the sense that, it is not closely related to any other living canid, and is the only species of its genus Chrysocyon (translating to ‘golden dog’ in Latin). Interestingly enough, despite its common name, the ‘maned wolf’ is neither a wolf, nor a dog, nor is it a fox (in spite of its confusing similarity and color pattern with the red fox). They inhabit the Cerrado region – the largest biome of South America. At present, the population of these mammals is almost threatened.

Fur/hair/coat: The entire body is covered with long, copper-orange to tan hairy coat, with the throat region having a white ‘bib’, and the tail-tip being white as well.

Head: Broad-headed, with a wide skull, and a long, dark muzzle that is shiny towards the tip (nostrils).

Feet: All four feet are long in proportion to its body.

Eyes: Long, almond-shaped eyes that look dark from a distance.

Ears: Large and long ears, about 7 inches in length, and are rounded rather than forming an angle at the tips. 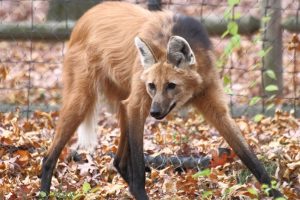 Teeth: Dentition is similar to that of other canids, including dogs, foxes, wolves, coyotes, etc., with lines of sharp teeth including two pairs of long canines.

Sexual Dimorphism: There is very little or no visible differences between the sexes, with the males being slightly taller and larger than the females.

The longevity of maned wolves in the wild is unknown. In human care, median life expectancy is 6.5 years with a maximum of 12 to 15 years. 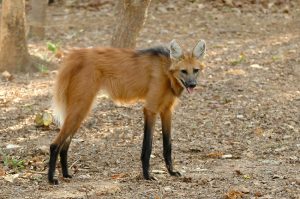 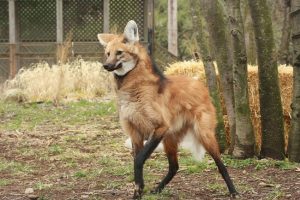 Currently, no subspecies of the maned wolf has been described by the biologists.

Maned wolves are shy creatures and seldom show up. These animals are primarily nocturnal and would hunt at night especially during the hours of dawn and dusk, spending the day hours usually by resting in areas covered with thick bush and wild vegetation.

The maned wolves are mostly solitary creatures, except during the mating season. They are chance predators, and would even go to the extent of stealing a chicken from farms, which is a common incident in the human habitats within their range.

These canids are also territorial, with the average distance of each territory being 27 sq. km. They mark their areas with feces and strong-smelling urine, usually in higher places like termite mounds, hillocks, etc. along the boundaries of their territories. 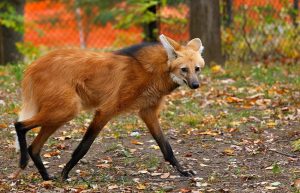 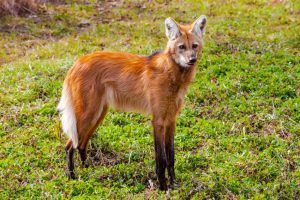 This species is omnivorous. Research shows that the diet list of the mane wolf is made up of more than 50% plant matter, including sugarcane, tubers, and fruit (especially wolf apple). Among the animals, they consume rabbits, cuis (wild guinea pigs), and young viscachas (a species of burrowing rodents), as well as agoutis, pacas, insects, reptiles and even birds.

Because of their shy nature, most information about their reproduction came from the study of pet specimens, under human care, or those in the zoo. The animals are mostly monogamous. The female maned wolves enter their estrus cycle only once a year, which continues for about five days.

While the peak time of their breeding in the wild falls between April and June, the males of the species produce sperm as usual, like other mammals>canids. During this season, both means of individual interaction – scent marking and vocalizations – increase dramatically.

Several research have shown that these mammals give birth to 1-5 puppies in a litter, with the average number of pups being 2.5, after a gestation period of around 65 days. 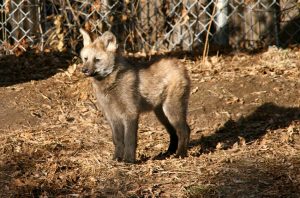 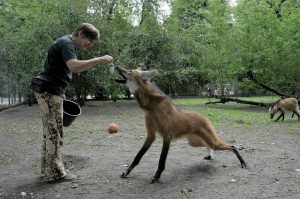 The mother maned wolves shoulder the responsibility of raising the juveniles; however, there are several evidences of the father fetching and providing food to their babies both in the wild, as also, in the zoo.

The newborn young ones are nursed for about four weeks. During this period, the mother introduces the baby maned wolves with regurgitated food. The babies generally leave the territory of their parents and become independent when they are about one year old. 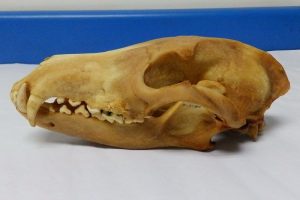 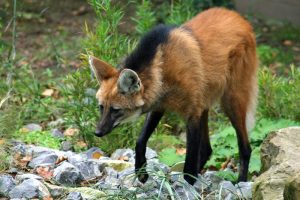 There are no natural predators of the maned wolf; however, many specimens are hunt down or killed by the locals either for fur, or for trespassing inside their farm (stealing crops, or livestock like chicken).

Relationship with Humans and Other Species

As mentioned, because of their shy behavior, they avoid human contact, and hence, are not dangerous or directly threatening to humans. They would only bite or attack if threatened.

At present, domesticated and feral dogs also pass on diseases to these creatures and are known to even attack or kill them in some cases.

These wild animals are threatened mostly by habitat loss, as well as, frequent incidents of being run over by automobiles.

With only around 17,000 adult individuals being left in the wild, the IUCN 3.1 has declared the species as ‘NT’ (Near Threatened). 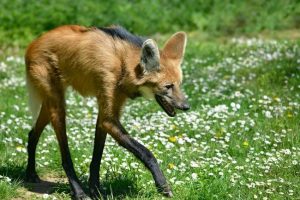 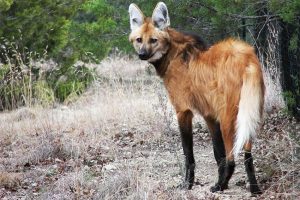