The Eastern Tiger Swallowtail is a type of swallowtail butterfly inhabiting North America. It has derived its name “Eastern,” because it is abundantly found in the eastern United States. The term “Tiger,” is used due to its distinctive tiger like markings, particularly found on the males. Finally “Swallowtail,” is because of their long “tail” on their hind wings which is similar to the swallows.

This species of butterflies is very colorful and bright. 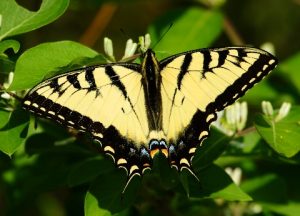 The color of the female varies from yellow to bluish-black. The hind wing of females has a row of prominent blue stripes and a sparkling blue wash over parts of the inner hind wing. The upper side hind wing has a distinct orange minor spot. On the underside of the forewing, the row of minor spots may be fused into a constant band which appears like the Canadian Tiger Swallowtail.

Size: The size of this butterfly is about three and a half to four and a half inches.

Wingspan: The wingspan is around two and a half to four and a half inches, which is 6.2 to 11.4 cm. The females are slightly larger than males.

The Eastern Tiger Swallowtail is abundantly found in North America in the east of the Rocky Mountains, starting from Ontario south to the Gulf coast and northern part of Mexico.

The Eastern Tiger Swallowtail lives in deciduous woods all along the streams, rivers, swamps, edges of forest, river valleys, parks and suburbs. 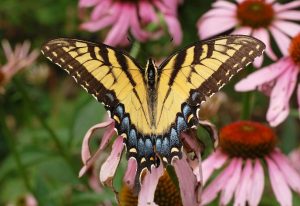 They have very less adaptive features.

Eastern Tiger Swallowtail larvae eats the leaves of a variety of wooded plants which includes ash, wild cherry, birch, tulip, cottonwood and willow. The Adults eat the nectar of flowers from a variety of plants. 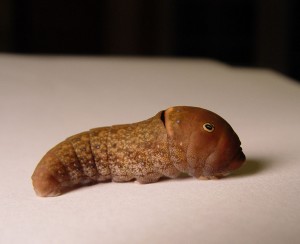 They brood twice, especially those from the northern part while butterflies from the southern area brood thrice. Males watch out for females who are receptive. They patrol at tree top points and swoop at lower levels to stop in front of females and offer to mate. During courtship the male and female flap around each other before landing and mating. If they feel they are under danger during mating then the female carries the male away. Male swallowtails have a scent like pheromone which is used in courtship.

Butterflies and moths go through complete transformation in which they undergo 4 diverse life stages. It takes around a month for the egg to grow up into an adult.

Larva Stage : After mating, female tiger swallowtails lay eggs on leaves of the host plants. When caterpillars first hatch, their color is like a bird excreta. As they grow up, they turn green with a large head and bright eyespots. The eyespots are not eyes.

Pupa Stage : When caterpillars grow up fully, they then turn into pupae. The name for this stage is chrysalis. The chrysalis of this butterfly is greenish-brown in color. It is little over an inch long. Hibernation occurs in this stage in those places with cold winter months.

Adult Stage : After a month from the time the egg was laid, a beautiful butterfly will come out from the cocoon. Butterflies stop growing once they emerge. An adult Eastern Tiger Swallowtail will pop out of the chrysalis in a couple of weeks. If the weather is too cold, the butterfly may wait till the spring season arrives. 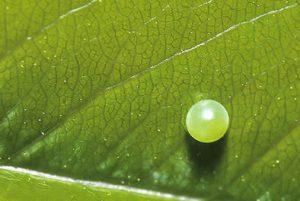 The lifespan of the Eastern Tiger Swallowtail Butterfly stretches from spring through fall, all through which they produce two or three broods. These butterflies live for about a month.

Eastern Tiger Swallowtail population is “secured” according to research.

Let us check out some of the interesting facts associated with this North American Butterfly.

Here are some of the incredible pictures of this colorful butterfly. 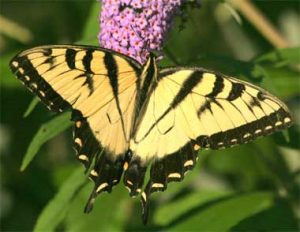 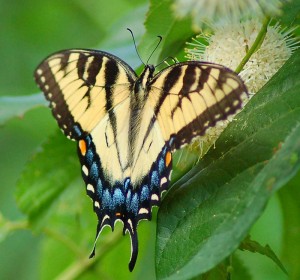 One response to “Eastern Tiger Swallowtail”