What is an Eastern Gray Squirrel?

The Eastern Gray Squirrel is a tree dwelling rodent, a very common species of squirrels, mostly found in North America. It is a tree squirrel, which belongs to the genus Scirus, and is native to Midwestern United states. It is often found in woodlands, suburban areas and urban areas.  It is a prolific and an adaptable species.  I was earlier introduced in the areas western United States, and now it thrives there. These squirrels are not gray in color; they are actually a mixture of black, browns and whites. They are actually banded with whitish ends, due to which they assume a grayish look.

Eastern gray squirrels belong to the genus Sciurus. This word is derived from the Greek words skia that means shadow, and oura, that means tail. Therefore the meaning of this name is that the squirrel is sitting in the shadow of its tail. 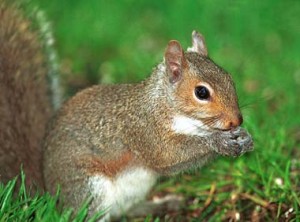 The eastern gray squirrel has gray furs and is predominantly found in black and gray color.  Its underside is white in color, and the tail is quite bushy. The black and the gray species are the most commonly found squirrels. Its tail is used to maintain balance while it is dashing between the branches. It may also have a reddish color in some cases. The body of the squirrel is about 25 to 30 cm in length, while its tail is 22 to 25 cm long. An adult eastern gray squirrel approximately weighs 400 to 600 grams. The grayish fur is tawnier in summer, with whiter tail, whereas, in winter, their furs are mostly behind their ears.

They have round footprints, which are just about an inch long, but their hind prints are 2.5 inches long. The color of their fur may change with seasons.  The gray color of their fur is a grizzled salt and pepper combination, and is often banded by black and gray guard hairs, which are tinged white. The most attractive feature of the squirrel is its large and bushy tail. This tail has some very important functions to perform. It is like a rudder that helps the squirrel in its long jumps, a warm winter covering and finally also acting as a distraction to the predators.

The Eastern Gray Squirrel is the largest of all tree squirrels that is found in eastern Canada.  It inhabits large areas of the dense woodlands and the ecosystem that spreads across 40 acres of land. Since they are predominantly nut-eating species, they are found in the vast tracts of Oak and Hickory forests in North America. These forests are the habitat of these squirrels since they contain dense vegetation which is a source of food for these squirrels. Eastern Gray Squirrels construct their dens on the bare branches and hollow branches of trees. They also use the abandoned nests of other birds for shelter.

The dens of the squirrels are lined with mosses, dried plants and thistledown, which help in the insulation of the den and reduces heat loss. The den also requires a cover, which these squirrels generally build it afterwards. These squirrels are also found in parks and backyards of the houses in the urban setting.  They may be found in the farmlands of rural areas. This squirrel has been introduced in Great Britain and South Africa. The squirrels spend their maximum time in the trees, and moves about in the tress with great agility. 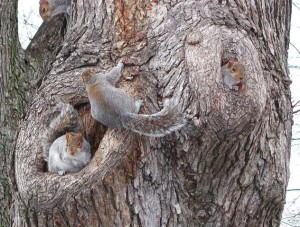 The eastern gray squirrels build a nest, which is called the drey. This nest is built in the fork of the trees.  Drey is made up of dry leaves and twigs. Squirrels also build their nest in the exterior walls of house. They may also take permanent shelter in a tree den.

The Eastern gray squirrels are very similar in behavior to the other rodents. They are alert, aggressive and inquisitive rodents, which are very fast at moving and jumping through the tree tops. They are a scatter-hoarder like other rodents, since they hoard huge quantities of food for future. The squirrels can make several thousand caches per season. They have a very spatial memory, since they need to decide the location of these caches, and also make landmarks to retrieve them.  They have a good sense of smell, since they can smell these caches from a distance of few centimeters.  They are one of those few mammalian species, which descend o the tree with their head first.

These squirrels are more active during the day than by the night. They are the busiest at afternoon and dawn.  They are quite active animals, and work throughout the year, are even capable of feeding themselves at any season, be it snow storms, or the dry summer.  They are easily capable of negotiating the trees, vines and shrubs.  They have incisor teeth, which grow constantly, and are constantly sharpened by gnawing of the bark, plastic and metal objects that is available around. They do not require hibernation; therefore do not hibernate at all.

There are two breeding seasons for the Eastern gray squirrels in a year. One season starts from December to February, and the second is sometime around May to late June. The female squirrels are not capable of breeding in their first year of birth.  The males are very promiscuous as breeders, and they indulge themselves in considerable activity during breeding. The Eastern Squirrel gestation period is for about 44 days. After this gestation period, the squirrels produce approximately 2 to 6 young, naked and pink babies. The number may even be increased to 8.  The young ones have larger head and feet, as compared to the other body structures at the time of birth, and even their eyes are closed.  They are slow maturing. They are completely furred with bushy tail. The gray squirrels run about the trees during their courtship ritual. While in captivity, they can live for 20 years, but in the wild, their maximum life is 12.5 years.

The eastern gray Squirrels feed on tree bark, seeds, walnuts, acorns, and the other kind of nuts, and the various fungi that are found in the forest region. They are an opportunist in searching for food, and therefore can adapt to a wide variety of habitats. They have different diet plans for various seasons, since they look for the availability of different food in different seasons. They feed on buds of hardwood trees in spring, winged seeds of maple in summer, along with some other berries and other wild fruits. During autumn, their diet comprises mostly of hard nuts, bitternuts, hickory nuts, beechnuts, pine seeds and butternuts. They are industrious hoarders in this point of the year.

Squirrels have a very good sense of smell, due to which they can find the berries that are buried in the ground. They use the bird’s feeders to find their food during winter. Not only nuts, are squirrels also fond of eating insects, young birds and caterpillars. But they prey on these birds and insects in very rare occasions, when food is scarce.  Very rarely, they eat bones also.

Since the squirrel is a small prey animal, its life span varies greatly. Some researchers say that it can live for up to 20 years in captivity, but in wild its life span is for a maximum period of 13 years. An average squirrel has an average life expectancy of three years.

The eastern gray squirrel is generally found in Western North America, in Canada< in Alberta, in the United States, California, Oregon, San Francisco, Santa Clara, San Mateo. It is one of the most common squirrels in the suburban areas, in North America and California. It is an invasive species since it has a very small size. It inhabits the regions of United States, Southern Canada, Texas, Florida, Ireland and Australia. 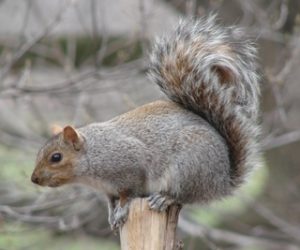 The Eastern Gray Squirrel has very few natural predators. The most important predator for these animals is Red fox, Hawks, Raccoons and Snakes. Since they have few natural predators, there has been a rapid increase in its population.  Therefore certain measures are being to reduce their number. The Fox squirrel is on of the predators of this animal.

One of the most important adaptations of the gray squirrel is its ability to leap trees, and its ability to get away from the predators. It can also get if food easily. It has sharp claws, with the help of which, it can easily climb trees and grasp things. It has sharp teeth, which helps it to crack open the nuts. It scampers up the tree.

The eastern gray squirrel is a host to many diseases and parasite attack. The squirrel can have numerous cysts on its body due to the Botfly larvae. Lice, worms and ticks also affect these squirrels.  They also face certain ailments like the Squirrel pox and Fibromatosis. Fibrmatosis is a disease which is caused due to a virus, and this causes a lot of large skin tumors on the body of the squirrel. If the tumor is formed around the mouth or around the eyes, the squirrel may lose his eyesight or may even succumb due to starvation.

The eastern gray squirrels have a long history; they can be dated back in the past, when the images of these squirrels were found carved in the temper pipes that were made by the Hopewell culture. In the 1807, the large population of these squirrels caused a whole lot of destruction in Ohio, due to which the people were forced to hunt for them.  Therefore a massive hunt was organized in the 1822, and this resulted in the killing of 19,666 squirrels approximately.

Now, the prime range of this eastern gray squirrel is found in the hill country.  These squirrels prefer oak-hickory forests, but they have the capacity to survive in other forests as well. It has now urbanized itself as well.