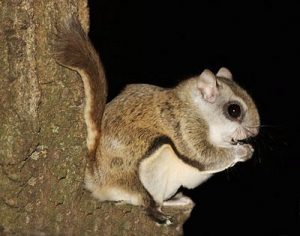 Body: Northern flying squirrels have cinnamon or light brown colored furry skin. The mammal is greyish on the two sides of its body and the under-side is whitish.

Eye: The Northern flying squirrels have, compared to their size, very big and wide opened eyes.

Ears: Northern flying squirrels have roundish, tiny, and furred ears on both sides of the head.

Wings: Northern flying squirrels do not exactly fly. They glide with the help of a membrane, as furry as their body, attached to the front-limbs extending to the hind ones. The membrane is called patagium.

Tail: Tail of this species is furry and wide but flat.

It is very interesting studying the behavioral traits of this exotic mammal.

This exceptional species of squirrel live for about 4years. At least the wild ones do not live more than 4years.

Northern flying squirrels tend to reside in moist and humid areas. However, the species have also been traced widely in areas with fir & mixed hemlocks, spruce, beech maple forest, and areas with aspen groves. These squirrels prefer nesting much higher the ground level, about 1mtr to 18mtrs high. They knit their nests in coniferous trees’ trunks with conifer needles, leaves, feathers, and furs.

The best adapting feature of Northern flying squirrel is their gliding ability. The species are very good gliders. To top it, their four basic sense organ of sight, touch, smell, and hearing are extraordinarily active.

Not too minute details are known about the reproductive process of Northern flying squirrels. However, what studies show are :

The most dangerous amongst all predators of the Northern flying squirrels are the hawks, owls, weasels, martens, domestic cats, Canadian lynx, red fox and coyotes. 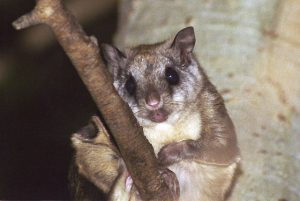 The following points are advisable before petting a northern flying squirrel.

Legality: Laws of petting northern flying squirrels are different in different states and countries. A state law permit is advisable to take before petting this exotic species.

Housing: Since they are of the gliding genre, they need more vertical space than horizontal carpet area. Artificial prop root like ropes could be hung for them to play and make them feel as much as at-home possible. Nest boxes are needed to be provided in the cage for their natural habitat look.

Water: The Northern flying squirrels should be provided water in a shallow dish, since they have been studied to have problems with drinking water from bottle like containers.

Food: Their diet is very simple and not at all difficult to be provided with their original natural diet. Nuts, fruit seeds, fruits, small insects, sunflower seeds, corns, small worms, moths, etc. occasionally the Northern Flying squirrels can be given boiled eggs and shredded chicken to meet up their natural protein need by these supplements.

Temperament: The Northern flying squirrels have been studied to gel really well with their keepers if being bred in captivity since a very tender age.

The main species of Northern flying squirrel is completely safe in terms of their existence. According to IUCN research, this species come under Least Concerned list.

The US wildlife and fishery department is taking measures to ensure safety of the sub-species’ habitat problem.

Help to save this species, the only of its kind in the world, for future generations to see them in person, and not just read in books about them. Northern flying squirrels are very friendly creatures and interesting as well. Its sweet squirrel like nature and sharp gliding skills like bats is an amazing combination. Adopt a pair now and experience them in person, also helping to conserve the species.

Here are some very interesting facts about this exceptional species : 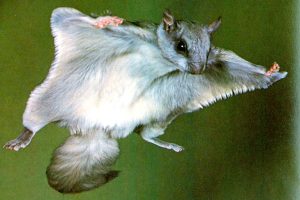 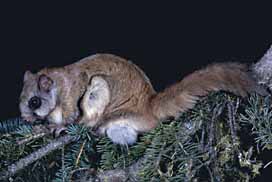