The Indian giant squirrel, sometimes called the Malabar giant squirrel, is a large species of tree squirrel endemic to India. The state animal of the Indian state of Maharashtra, it is called ‘shekru’ in the native Marathi language. 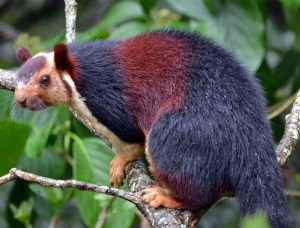 Color: Variable from a brown to dark red, undersides have white fur. There is a white spot found between the ears.

The Indian giant squirrel lives in the moist tropical forests of Peninsular India at elevations of 590-7,546ft (180-2,300 m) above sea level.

As per the findings of Moore and Tate in a study concluded in 1965, there are four subspecies of the Indian giant squirrel: 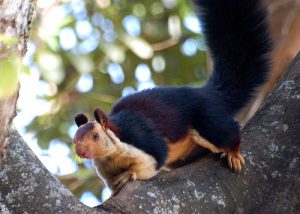 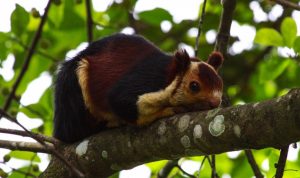 Mating season for the Indian giant squirrel is between the months of October and January. Males compete for mating rights with one female, with the victor getting the first go at copulation. He prevents his competition to engage with the female for at least a few hours after copulation to give an advantage to his chances at paternity.

The subordinate male eventually also copulates with the female.

A litter of a single pup is born after a gestation period of 21-25 days.

Young are born without fur and eyesight. The latter is achieved after 22-26 days. They come out of the nest after 30 days and are eventually weaned at 6 months.

They reach sexual maturity at 2 years of age. 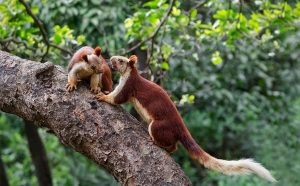 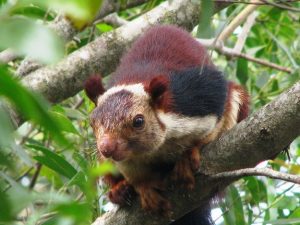 The maximum a captive Indian giant squirrel had lived was for 16 years, life expectancy in the wild is much shorter.

They are a loud species, and their territorial calls are loud and staccato like vocalizations which go on for several minutes before tapering into softer chirps.

The most common vocalization of the Indian giant squirrel is the alarm call.

Other calls include mating calls, vocal communication between mother and her young, and calls of appeasement. 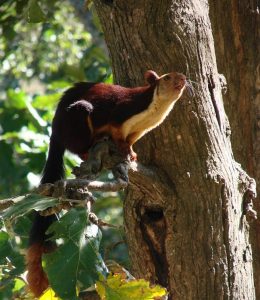 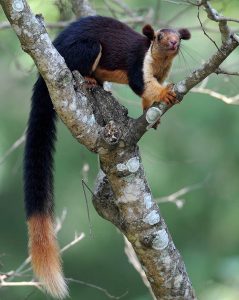 Indian giant squirrels are hunted by various birds of prey like the black eagle, crested serpent eagle, crested hawk eagle, and brown fish owl, as well as apex predators like the Indian leopard.

Snakes are also known to have at least tried to prey on Indian giant squirrels.

Indian giant squirrels are categorized as ‘Least Concern’ on the IUCN Red List.

Severe deforestation across its habitat owing to developing agro-economic advancements is a serious threat to Indian giant squirrel populations.

The Bhimashankar Wildlife Sanctuary was set up in the Pune district of Maharashtra to protect the Indian giant squirrels’ habitat. 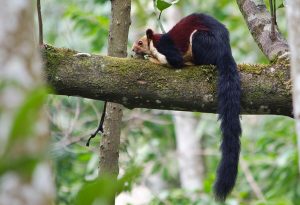 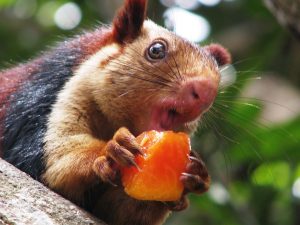