The fox squirrel is a rufous-colored squirrel found mostly in North America. It is the largest among all the species of squirrels found in this region of the world. It is also sometimes known as Bryant’s Fox Squirrel. 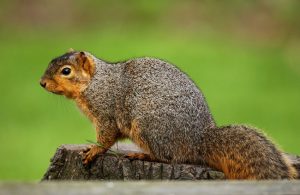 The body length of a fox squirrel ranges between 45 cm and 70 cm. The length of the tail is between 20 cm to 33 cm. Weight of a squirrel can vary between 500 gm to 1000 gm. No sexual dimorphism pertaining to appearance or size can be seen in these rodents. The color varies according to their geographical habitat: In the Appalachian Mountains, the squirrels are black or dark brown with white stripes on the tail and face. In the southern regions, these squirrels are mostly covered by uniform black coats. However, in most regions of America, these rodents are brown-yellow to brown-grey in color.

To aid climbing, they are equipped with strong abdominal muscles, flexors of forearms, extensors of digits and sharp claws. They have strongly developed senses of sight, smell and hearing. Fox squirrels use their whiskers as touch receptors; this enables them to effectively grow their environmental awareness. The vibrissae or whiskers grow around their eyes, chin and nose as well as on the forearms. They have long bushy tails and strong hind legs. The skull of these squirrels consists of 20 teeth.

Fox squirrels like to spend most of their time playing and feeding on the ground. They are also agile climbers and like to hop around tree tops. Their prime activities during a day include feeding, gathering and storing of food. These squirrels are diurnal; which means that they are active during the day and sleep at night. They are also quite non-territorial.

Fox squirrels are solitary creatures but couples are often seen sharing the same nest in the tree. They also share their feeding area with others of their kind.

The fox squirrels are very gregarious and socially graceful by nature and one of their favorite fun activities includes chasing other squirrels around the trees and across great distances on the ground.

Fox squirrels make good jumpers. They have the ability to leap horizontally for around 15 feet or descend to a lower ground from a height of 20 feet or more.

When they intend to threaten and scare off another fox squirrel, they stand upright and shake their upward-pointed tail.

Fox squirrels residing in Illinois eat mostly hickories during the months of August and September. Other important foods consumed during this season are corn, black walnuts, pecans and Osage orange. During the spring season, they like to consume the seeds and buds of elm trees. Mulberries are among the favorites with these foxes around May and June. 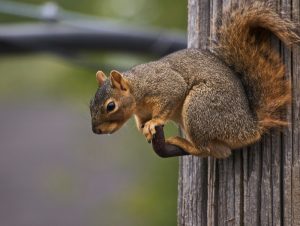 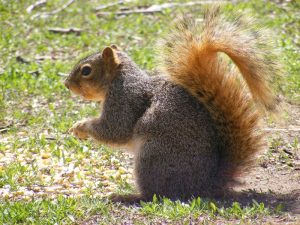 The fox squirrel is found in different parts of the Unites States such as North and South Dakota, Texas, Colorado, California, Kansas, Oregon, Washington, Idaho, Florida and Montana. The fox squirrel is also a resident of Canada in the north and Mexico in the south.

The ideal habitat for fox squirrels to reside is an agricultural land filled with small groups of large trees. They are frequently found in open forestlands. The size of the oak and pine trees and the spacing between them are important aspects of these squirrels’ habitat. They are commonly found foraging at the edge of the forest.

The habitat of these squirrels can be of two types: tree dens and leaf nests. They may accommodate themselves between a leaf nest and a tree den or between two tree dens. During winter, fox squirrels prefer tree dens to shelter themselves from the cold. They also prefer the tree cavities to raise their young ones. Leaf nests are fashioned during summer and can be used throughout the year when tree cavities are scarce. They build their leaf nests on deciduous tree forks around about 9 meters from the ground. They can also be found residing in mangrove swamps and cypress trees. The average diameter of a tree cavity is around 12 inches to 21 inches. They usually have a depth of 14 to 16 inches and width of around 6 inches. They may make their own tree dens or they can choose natural cavities or holes made by birds like woodpeckers.

For natural predators, capturing adult fox squirrels regularly is a challenge and when they do so, they do it mostly by chance. The most common predators posing a threat to these squirrels are foxes, dogs, bobcats, red-shouldered hawks, red-tailed hawks, barred owls and great-horned owls. Other animals such as opossums, raccoons, pine snakes and rat snakes mostly feed on the fox squirrel nestlings and young ones.

One of the principal adaptations of fox squirrels is their ability to move very quickly whether on land or on tree tops. They can quickly leap from one tree to another; this skill helps them to avoid predators. They have sharp claws which helps them to climb trees easily and grasp nuts and other objects strongly. They have strong eyesight that helps them to locate food source and predators from a long distance.

Fox squirrels normally mate during the midsummer months around June as well as in the months of December-January. 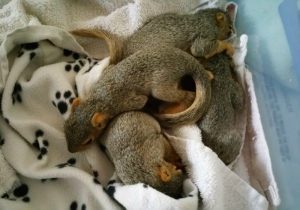 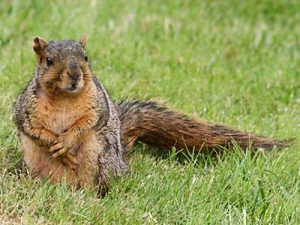 Fox squirrels are polygamous by nature; which means that the males mate with several females in a lifetime. Fox squirrel’s courtship behavior includes several males chasing a female; the victorious male then protects the female from the attention of the other males.

Females achieve sexual maturity around the age of 10 to 11 months. They produce their first offspring at the age of 1 year. Normally two litters are produced in a year.

The gestation period for fox squirrel females is around 44-45 days. The month of January sees the birth of the earliest litter but most of them are born between March and July. The average litter size for these squirrels is three; however, the litter sizes vary with seasonal influences and available food resources. The males take an active part in rearing of the young squirrels.

The young squirrels are blind when they are born; they are also without any fur on their body and are practically in a helpless state. They depend on their mother’s milk for the first few weeks of their life. This period may last anywhere between five weeks to three months as development in fox squirrels is slow compared to some other rodent species. It takes around 4 to 5 weeks for the eyes to open; the ears open at the age of 6 weeks. They start to climb around the tree at the age of 7 or 8 weeks. The young ones may not leave their nests and start foraging on the ground until about 12 weeks.

The average life span for fox squirrels is 8.6 years for the males and around 12.6 years for the females. However, in some cases specimens living up to 18 years have also been found.

There are ten recognized subspecies of these squirrels: 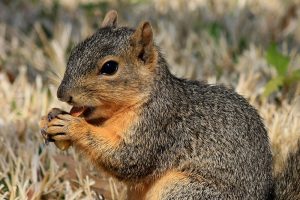 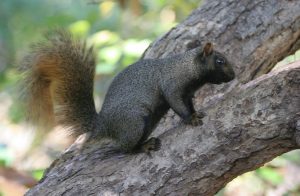 Fox squirrels are often kept as pets. While keeping them as pets, it is important that they should be provided with a habitat system that reminds them of their natural environment and does not look artificial. Each squirrel should be provided with their own individual space to grow and develop. If you want to house your squirrel inside a cage for most of the time, then a tall mesh cage with a size of 4x6x6 feet is appropriate for that purpose. Modifications such as ladders and shelves can be added to the cage; these can be a source of fun and stimulation to your pet. The cage should also be lined with twigs, branches of trees and leaves; these objects can serve as playing tools and also help the animal in building its own nest. The nest should be provided with food and water. You can also decorate your pet’s cage with ferret pouches and rabbit toys to entertain your pet. The cage should ideally be placed on a higher platform as these creatures like to spend most of their time far away from the ground.

The squirrel should be fed an adequate diet of acorns, figs, nuts, fruits, berries and seeds. Their diet should be supplemented by calcium powder. You should also provide your pet with items that will help to maintain his dental health. Things like sterilized large bones, cuttlebone, tree bark, twigs, pine cones, leaves, pumice stone and roots provide ample opportunity for the squirrel to chew and clean its teeth with.

The Fox Squirrel is listed in the category of “Least Concern” by the IUCN.

Here are some interesting facts about fox squirrels: 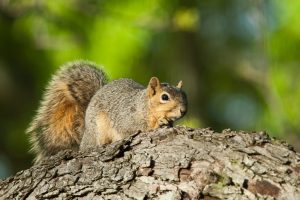 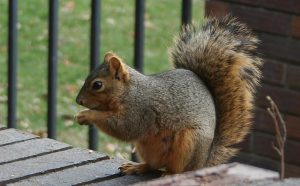 Fox squirrels are an important part of North American wildlife. Always jumping and running around, they also make adorable pets. Unfortunately, an increase in hunting and destruction of habitat has reduced their numbers compared to the earlier times. Hence it is our responsibility to take care of these animals and preserve their numbers.

One response to “Fox Squirrel”