The Golden-mantled ground squirrel is a rodent mostly seen in the mountains and forests of the western zones of North America. Despite the fact that they are often confused with the Uinta chipmunks, these squirrels can be easily distinguished because of the absence of stripes on their faces.

The average size of a Golden-mantled ground squirrel ranges between 9 and 12 inches. They weigh between 4 and 14 ounces. Their bodies are covered with brownish gray fur and they have got black stripes on their backs. A white stripe runs between two black stripes on either side. The stripes are limited to their backs and do not extend to their faces. The squirrel gets its name from the russet or golden brown mantle that covers its head and shoulders. The color on the underside of the body is somewhat lighter than its back. The fur color on the front paws, chest, head and face are a coppery red. The eyes are circled by whitish fur rings. 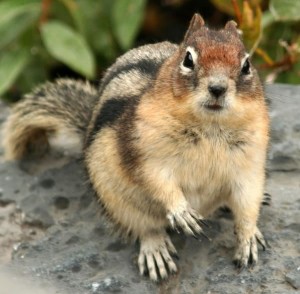 Golden-mantled ground squirrels like to spend a lot of their time in sunny areas filled with pioneer plants. This provides them with valuable resources for food. They have cheek pouches where they can store their food. These pouches also assist them in carrying food to their dens from long distances while they use all of their four limbs to run at full speed. They also have a tendency to often accept food from humans.

The Golden-mantled ground squirrels hibernate from the late summer months through early spring. During hibernation, their heart beat is reduced to 5 beats per minute. They store food in their burrow as they like to eat something when they wake up from their long sleep. Sometimes they also eat nuts and other small food materials while they are hibernating underground. Prior to hibernation, they eat well through the whole summer and gain a lot of fat to get themselves through the hibernating months.

These squirrels are loners. In their younger days, they spend most of their time in company of their mother and siblings. As adults, they do hang out in small clusters sometimes but mostly they like to spend their own time in solitude. They do spend time with the opposite sex primarily during the breeding months.

They roll their bodies in the dirt to clean themselves and use their teeth and claws to comb their fur.

These squirrels can vocalize and produce expressive sounds. However, for most of the time they remain silent. They can produce a loud chirping or squeaking sound when they are alarmed. While on a combat with other ground squirrels, they can make a growling sound.

While they are hanging out in community parks and other similar locations, they often tend to eat food from well meaning humans. This eventually does not do them any good as in this way they are mostly fed human food. They should rather fulfill their daily food requirements from the wild. This will not only teach them to be independent but also take care of their nutritional requirements.

These squirrels can be found roaming and foraging in coniferous and other types of forest habitats, in open woodlands, in rocky slopes and meadows as well as in sagebrush flats.

The Golden-mantled Ground Squirrel is hunted by various predators within its normal range. The common predators of these squirrels include jays, owls, hawks, bobcats, foxes, weasels, coyotes, skunks and snakes.

The Golden-mantled ground squirrels have developed certain adaptations which have enabled them to adjust to their environment more efficiently as well as protect themselves from life-threatening predatory species. These adaptations are discussed below: 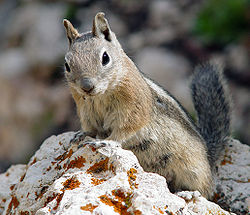 The mating season for these squirrels begins in spring when they come out of their hibernation.

Depending upon the elevation, the squirrels come out of their hibernation anywhere around late March to July. The males end their hibernating period earlier than the females. After that starts a territorial struggle among the male squirrels. The females come out of hibernation almost two or three weeks after the males. They build nests in underground holes or burrows lining them with grasses, leaves and bark. After breeding, the females go through a gestation period of almost 28 to 30 days and then produce a litter of around 5 to 6 babies. The females produce one litter in a year. The newborn babies have their ears and eyes closed; their bodies are hairless except for a little fur on their heads and tiny whiskers. The fur starts to develop in about a week. The average weight at birth is about 0.0132 pounds. The body temperature of a newborn squirrel is 35.85°C. The females take care of the young ones. The babies are weaned when they reach the age of five to six weeks. The young ones head out independently on their own in the late summer.

The average lifespan for the Golden-mantled ground squirrel is about 4 years. The maximum longevity for these squirrels is 10 years.

The Golden-mantled ground squirrels are quite popular as pets. The important thing to remember while keeping them as pets is to provide them with an environment that is as close to their natural home as possible. These squirrels love to have their own space and providing them with this requirement is necessary for their healthy growth and development. The cage built for a squirrel should have the minimum dimensions of 4x6x6. It is not all that important to add ladders and shelves to the cage as these squirrels mostly like to spend their time on the ground. The cage should however be finely lined with leaves, barks and twigs. These items can help the squirrel to build its own nest as well as help them to play and entertain themselves. The cage can also be decorated with ferret pouches and rabbit toys.

Their diet should ideally consist of adequate amounts of acorns, berries, nuts, figs, fruits and seeds. In addition to their regular diet, they should also be provided with calcium powder supplements.

The Golden-mantled ground squirrel is listed in the category of “Least Concern” by the IUCN.

Here are some interesting facts about these squirrels:

Here are some images showing these fun-loving and sporty squirrels in their natural habitat. 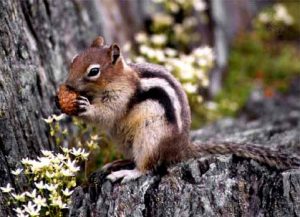 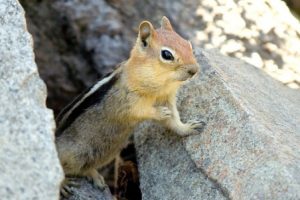 The Golden-mantled ground squirrels form an important part of the American ecological system. They also make loveable playmates as pets and are quite popular with children and adults alike.