Pipevine Swallowtail butterfly belongs to the Papilionidae family. They can be difficult to distinguish from other Swallowtails as it looks almost similar to other members of its family.

Color: The hind wings of Pipevine Swallowtail are generally bluish and blackish metallic in color. The underside of its wings has a row of orange dots.

Wingspan: Males and females are differentiated by their dorsal hind wing. Females are generally larger than the males. Females have larger faded spots that run along the edge of the wings. The hind wing area of the males is brighter than the females.

Pipevine Swallowtail’s wingspan is around 3 – 4 inches.

This butterfly is mainly found in Central and North America. Pipevine Swallowtail is found in the United States, lowland tropical Mexico and in some parts of Costa Rica and Guatemala. In the US, Nebraska, Arizona, Florida, California, Oregon and Texas fall in their range. 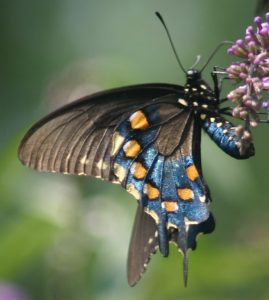 They are primarily found in forest edges and open wooded locations. They are also spotted in various kinds of habitats that include meadows, deciduous woodlands, tropical forests, open fields, gardens, forests, deserts and orchards.

In the Northern region of its range, this species is seen from April – October and in the southern region, they are spotted in during February – November. During winter, the pupa stage is spent in hibernation.

The adults fly during spring and summer and if the temperature permits, they may fly throughout the year. Pipevine Swallowtail prefers to fly low to the ground.

The life cycle of this species is slightly complicated as they have to go through few stages before turning itself into a full grown butterfly.

During the mating season, male butterflies patrol their range and wait for the females to arrive. As soon as a male spots a female, it lands and try to mate.

After mating, females lay the brownish red colored eggs in a cluster of 5 – 10 and at times it can go up to 20 as well. They lay their eggs on the stems or on the underside of the leaves so that their larvae can feed on it.

Caterpillars, i.e. the larvae are small in size. They stay together when they are born. The larvae feed on the host plant and they grow relatively fast. Initially, caterpillars feed in small groups, becoming solitary as they grow older. They do not like to stay in a single flower for a long period of time.

A full grown caterpillar is around 1.5 – 2 inches long and black in color with red or deep orange spines. The color of the larvae and the pupa changes according to the temperature of the environment.

Some plants of the Pipevine family contain a chemical that are poisonous for some animals, but it does not harm the caterpillars in any way. Instead, the larvae themselves become poisonous to other animals as the chemical tends to stay in their body.

The larvae of this species do not pupate on its host plant. The pupa stage is known as chrysalis. The color of the pupa is generally green or brown and the abdomen area is sometime patched with light yellow.  The chrysalis of Pipevine Swallowtail has a shape which is distinct from other butterfly species as it looks peculiar with horns and curves.

If a larvae pupates during Fall or late Summer, it come out as a butterfly in next spring and the larvae turns into a butterfly in few weeks if it pupate in early summer.

The plants, which Pipevine Swallowtails use as host plants belong to the Aristolochiaceae family. Aristolochia californica, Aristolochia tomentosa, longiflora, reticulata, serpentaria and durior are some of the plant species which acts as hosts to these butterflies.

Here are some interesting facts about this animal:

This butterfly is quiet abundant in its natural habitat. This species is not present in the list of International Union for Conservation of Nature (IUCN).

Here are some beautiful pictures of this colorful butterfly: 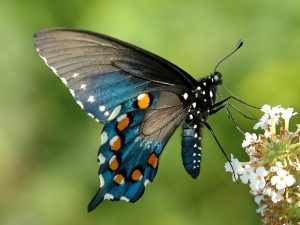 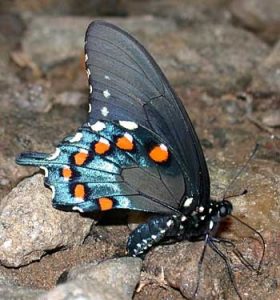