Spicebush Swallowtail belongs to the Papilionidae family and inhabits the Nearctic Ecozone. This family comprises the biggest butterflies in the whole world. They are low flying butterflies that have unique feeding habits and appearance. They are common in North America and are also referred to as the Green-Clouded butterfly.

Their wings measure between 80 and 110 mm, approximately.

A very distinct feature on Spicebush Swallowtails is the orange marking on the upper side of the rear wing. There are ivory spots on the lower portions of the wings which is largely black from the front. Males have bluish green scales on the rear wing’s upper side and the females have them in blue. 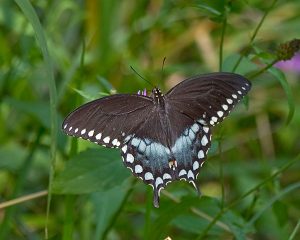 They are like bird excreta color in their larvae stage. On becoming caterpillars, they attain a light yellowish lateral bar across its body. They are pinkish downwards with segments outlined with different colors. A pupa attains shades of green and brown based on the season.

Swallowtails are distributed across North America. Their range stretches from south Canada up to Florida. Manitoba, southern Ontario and central Texas are some of other areas that come under its range. It has sparse population in New England and south of Mississippi River. On rare occasions they are also found in Cuba and Colorado.

They inhabit temperate climates, living in grasslands, savanna and forests. Marshes, bogs, swamps and agricultural areas are some of its prime habitats. Deciduous woodlands abound with larvae of this species, adults fly around this range as well. Roadside areas, parks and shaded regions in the woods are dwelt by them. 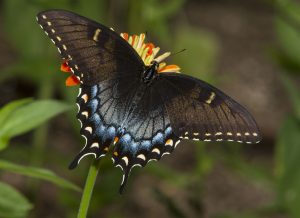 During the metamorphosis of this butterfly, their diet changes. In the stage of the larvae, they feed on leaves and shrubs of the host trees that are aromatic in nature. They primarily subsist on spicebush and sassafras. Apart from that they also feed upon sweetbay, redbay. Feeding on the host plant however is dependent on its availability in the certain region.

Adults on the other hand, like any other butterflies subsist on nectar, especially on honeysuckle, thistle flowers and clovers. Apart from these they also derive nectar from azalea, jewelweed, milkweed, mimosa, sweet pepperbush and dogbane.

These butterflies are being predated extensively by various predators throughout their life. Some of the predators which threaten their existence are dragonflies, spiders, robber flies and birds of different species.

To feed on the nectar that lies deep in the flowers, they have been provided with long proboscis.

Spicebush butterflies save themselves from predators by mimicking bird dropping and green snakes during the initial two stages of their lives.

Even after reaching adulthood, they can ward off predators by looking like Pipevine Swallowtails, that taste awful.

Summers are ideal to mate when they become adults. 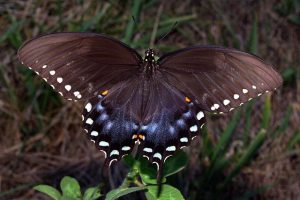 In the different geographical ranges, breeding months are varied. Copulation takes place after the initial procedures of finding a mate and impressing it via some rituals of courtship. Copulation continues for a long duration, sometimes exceeding an hour. The females then deposit their eggs on the host plants.

It basically occurs during the summers from April to October in the southern parts of the range. When the eggs are laid, they are not being looked after specifically like other species. Larvae get fully developed by deriving nutrients from the eggs produced by the females. Two generations might be produced by this species, beginning in April till October.

Eggs are laid on the part below the leaves which appear like bird dropping in its larval stage. With time, this starts looking like snakes forming into pupae, that turn greenish during summers. With the beginning of fall they assume brownish tinge and finally metamorphose into beautiful butterflies at the end of the cycle.

Adults have a very little life span which ranges from 2 days to 14 days.

There is not enough information regarding their existence status by any authentic source.

Some images listed here which will help in identification of Spicebush Swallowtail butterflies in their habitats. 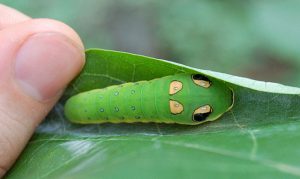 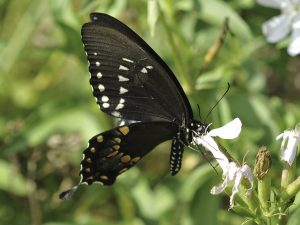