The conspicuous prettiness of the American copper butterfly is something that can never fail to brighten up your garden and your spirit in every way.

These small little creatures are noted to be ‘extra-active’ in defending their territory and are ever so full of life. Dancing away, fluttering their beautifully patterned orange wings, these small butterflies stand as a reminder of the beauty of creation and life as a whole.

This medium sized butterfly belongs to the Lycaenids or gossamer-winged family of butterflies.

The caterpillar’s body is noted to be covered with soft, downy hair.

Color: The color of the caterpillar may vary; it can be of a reddish tone with yellow shades on the sides or a pale yellowish kind of green with prominent red markings on the back or sides.

Size: A full grown caterpillar is approximately ¾ of an inch in length.

Color: The upper side of its wings is two-toned. One can notice that the upper side of the forewings is a brilliant orangish red with eight or nine blackish brown spots and a dark edge border. The hindwings are a strikingly dark complimenting an orange border. Some of the females also have a row of attractive blue spots inside the orange border; they are called caeruleopunctata. 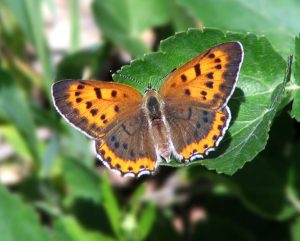 The undersides are somewhat similar in pattern but with a duller tone. The surface area underneath the forewing is orange in color with black spots and gray edge border. The area underside of the hindwing is more of a grayish white color with dark spots; there is a thin, jagged orange line in front of the edge.

The American copper butterfly can be spotted in a wide variety of habitats that may at times be quite contradictory in nature; these pretty little creatures are found in forest clearings, churchyard clearings, fields, pastures as well as uncultivated heathland with scrubby vegetation. It is not an unusual sight to find these butterflies hovering over disturbed areas like the city waste grounds.

This particular species of butterfly occurs in many regions throughout the globe. They are mostly common throughout Europe, Asia and North America (particularly from Nova Scotia to southern USA); in fact this species can also be traced further south of North America in the country of Ethiopia.

Although the American copper butterfly is familiar to the south/central regions of England and Wales, it is rarely found in large numbers. It is also found in certain parts of northern England, Ireland and Scotland.

Its occurrence can be recorded in parts of arctic Canada, northern Alaska and the Rockies.

This butterfly has been established as a genuine species in the Lemhi County of Idaho.

This butterfly has many subspecies including, 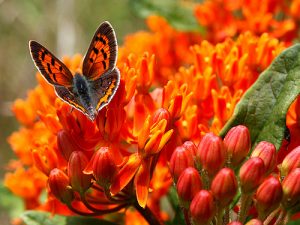 The Alpine and Arctic populations are noted to have one flight during the months of July – September. Those of them home to the north have two flights during June-July and also August-September; while a total of three flights are noted in the south from April – September.

During the caterpillar stage, the diet of this species mainly comprises of herbs of the buckwheat family like sheep sorrel (Rumex acetosella), curly dock (Rumex crispus) and mountain sorrel (Oxyria digyna). Young caterpillars are noted to feed by chewing holes on the underside of leaves.

On reaching the adult stage, butterflies basically drink flower nectar. They mostly nectar from flowers like the buttercup, ox-eye daisy, yarrow, white clover, butterflyweed and other such composite plants.

The males perch while waiting for their receptive females.

The phenomenon of pupation is known to occur in the leaf litter and studies suggest that the pupa is tended to or taken care of by the ants. A caterpillar undergoes 4 – 5 stages of growth; these growth stages are known as instars.

There are 2 to 3 broods in a single year; a fourth brood is noted to occur in the regions south during favorable years. This species overwinters in the caterpillar stage; the physiological state in which the pupae overwinter is called ‘diapause’.

It is typical to the American copper butterfly to fly about 1-2 feet above the ground level; it is also interesting to note how these lovely butterflies do not hover in the air for a very long period.

It is indeed a visual treat to observe these active little butterflies hovering in your home garden in a bright sunny day.

The American copper butterfly is also considered to be the most aggressive kind belonging to its family. Males tend to set up small territories and defend it in a vigor manner. Apart from rival males, these innocent butterflies are all up against any passing insect or even shadows cast by the birds flying in the sky, is enough to get them started in the act of chasing anything passing by!

Males can also get quite aggressive in pursuing the females. They mostly mate in areas of low vegetation.

Butterflies generally have a very short life. The adult American copper butterfly is known to have a life span of approximately 2 weeks.

The American copper butterfly enjoys a good status as a species that is abundant and secured in population; it is not enlisted as an endangered species.

Here are some really nice pictures of the pretty American Copper butterfly. 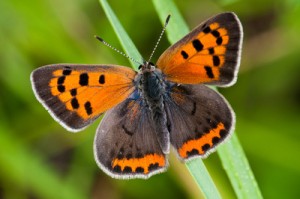 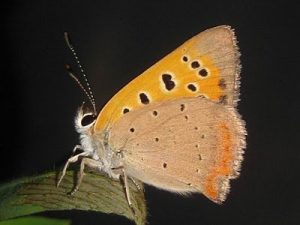