The Desert Tortoise is an American tortoise that lives in the deserts. These reptiles are very gentle creatures and have a very low rate of reproduction. The desert tortoise shares such extreme conditions of their habitat that no other tortoise in America does. Until the mid-1900s, they were commonly encountered by people in and around their habitats. However, at present, they have become quite rare and are seldom seen, or have vanished completely in some areas. The desert tortoise is the largest terrestrial turtle in the United States. 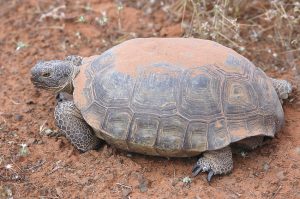 Size (Length): The height of these tortoises is around 14 inches. The hatchlings (babies) are no more than 2 to 2½ inches in length. 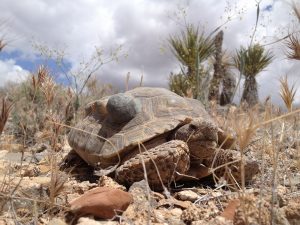 Height: They stand 4 to 6 inches from the ground.

Carapace (upper shell): They have a distinct high-domed, roundish carapace. The length of the carapace is 9-15”. 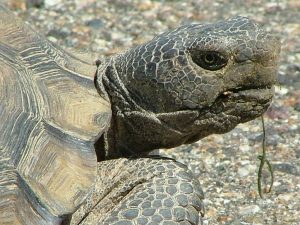 Eyes: Eye rings are light while the iris is yellowish to greenish yellow.

Beak: Protruding out like most other tortoises. The beak is mostly used to tear food.

Horn: Both the genders have a gular horn, which is an anterior extension of the lower shell. These are upturned and larger in the males. They use these horns for defense purposes, especially during male to male aggression.

Tail: They have a very short tail.

Feet: Their stocky hind limbs are elephantine with four digits while the forelimbs are flat and shovel-like with five digits. This species of tortoises do not have webbed feet but are covered by large cone-shaped scales.

Sexual Dimorphism: Males are larger than the females. The female has a flat plastron (lower shell) slightly expanded at the rear.

These tortoises live for a minimum of 35 years. However, they have been recorded to have been living for even 50 to 100 years. But the females have a shorter life span than the males.

The desert tortoise is widely spread across the Mojave desert and Sonoran desert of the southwestern US and the northwestern part of Mexico, especially the Sinaloan thornscrub, western Arizona, southeastern California, southern Nevada and southwestern Utah. 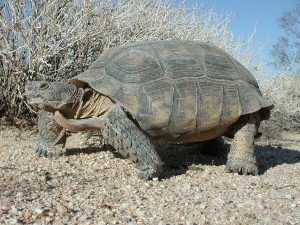 Habitat: Where do Desert Tortoises live

The natural dwelling areas of these creatures are desert scrubs, thorn scrubs, foothills, tropical deciduous forests. Although, most individuals of the entire population live in creosote bush scrub habitat at 1,000 to 3,000 feet above the sea level. 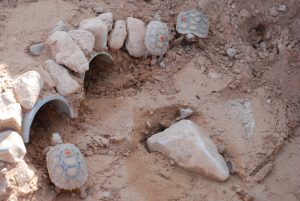 It has recently been decided that there are two species of desert tortoises. They have been classified on the basis of behavioral deviations, DNA and geographical differences, with those that live in the east and the west sides of River Colorado. The two variations are:

Desert tortoises spend almost 98% of their time underground. They are mostly active during monsoon or the rains and again during springtime, to forage for food.

Male to male aggression is quite common, especially during the breeding season, with the larger male dominating over the smaller. At this time, the male reptiles might display rough and tumble behavior, and might even use their gular horn to flip the opponent.

These animals have the ability to store water in their bodies, which they recycle during the arid summer months. Most of the water comes from the grasses and flowers that they consume during springtime. 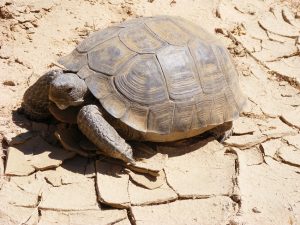 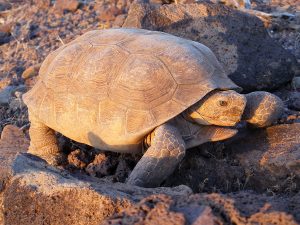 Because the desert tortoise live in the dry deserts, it is not easy for them to get constant supply of water or being exposed to moisture. Hence they live a dormant or torpid life of hibernation between late October to November and February. During this time, they mostly live inside of their burrows in order to escape loss of body water, and for protection against the heat of the summer (by ‘estivation’, or summer hibernation) and the cold of the winter. During this period, their heart rate, respiration rate, and all other bodily processes slow down.

Diet: What Do Desert Tortoises Eat

The desert tortoises are herbivores. In general, they feed on herbaceous perennial and annual wildflowers, such as wishbone bushes, lotus, desert dandelions, gilias, phacelias, locoweeds, spurges, blazing stars, lupines, Indian wheat, forget-me-nots, coreopsis, and many other species. They also love to consume perennial and annual grasses, as also fresh pads and buds of some species of cactus. However, shrubs such as creosote bush and burro bush are not included in their food list. 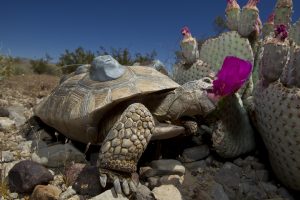 During mating season, the male tortoises would grow two large, white ‘chin glands’ around its chin to indicate the onset of the season. These turtles would mate mostly between spring and autumn, however, they have been noticed to engage in mating at any time round the year. The stronger the male, higher is its chance to win the female partner for mating. However, it is the decision of the female with whom it will mate.

As a mating ritual, the males would encircle the female time and again and would tend to bite its shell. As the act of copulation begins, the male uses its penis, which is hardly visible otherwise. The vagina of the female is close to its tail. As the process of intercourse begins, the male often keeps flapping its two front limbs alternately atop the carapace of the female, along with a grunting sound. 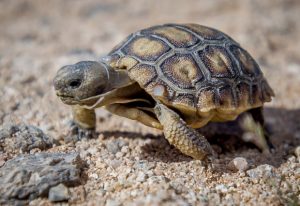 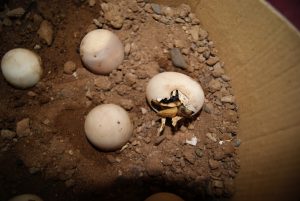 The gestation period of the desert tortoise is 10-12 months after which the females lay eggs. The clutch size is about 4-8. The young tortoises are born after an incubation period of around 90-120 days. The female turns aggressive while guarding its nest and eggs against predators, especially the gila monster, which often eats up its eggs.

The hatchlings grow very slowly, taking about 16 years or more to attain the length of 8 inches. However, the rate of growth depends on gender, age, location and precipitation.

Baby or juvenile tortoises are often predated by the local carnivores, and only a few percentage of the babies can reach complete adulthood. The females grow faster than the males. Normally, they attain the age of sexual maturity between 15-20 years. 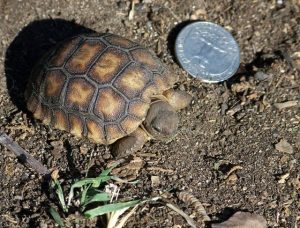 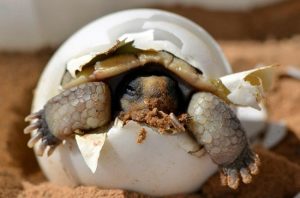 The type of predators of depends on the size, habitat and age of the tortoise. As mentioned, kit fox, coyote, gila monster and badger feasts upon the eggs. The young tortoises are preyed upon by some snakes, ravens, bobcats, badgers, roadrunners, kit foxes, coyotes and spotted skunk.

Large tortoises can resist predation, but may be eaten by badgers, golden eagles, bobcats, kit foxes and coyotes. Large mammals usually prey upon them only when there is a scarcity of other food sources like rabbits, rodents etc.

Desert Tortoise is a threatened species. The IUCN 3.1 has categorized them under the ‘VU’ (Vulnerable) species list. 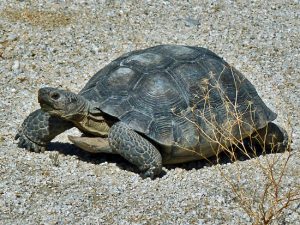 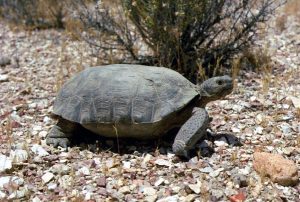