What is a Gila monster

Heloderma suspectum, commonly called the Gila monster (pronunciation Hee-la monster), is a venomous lizard species that is found in northwestern Mexico and southwestern USA. The lizard has a bad repute in the reptile world, being described in local folklore as repulsive and frightful. It is even believed to be capable of killing humans with gusts of venomous breath, stinging with the tongue, leaping high in the air for attacking, and spitting venom. 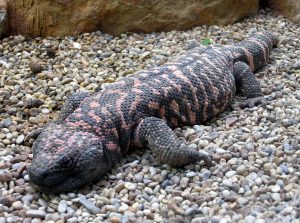 The following subspecies have been identified:

Color: The colorful bead-like scales, known as osteoderms, covering their bodies give them their characteristic black and pink with yellow or orange coloration. Banded Gila monsters have additional unbroken bands of yellowish or orange scales, while the other sub-species have a reticulated pattern of light and dark markings.

Skull: The reptile has a massive, stout skull. 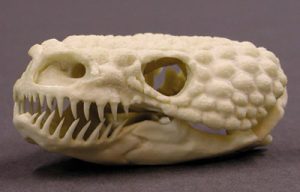 Teeth: These lizards have sharply tipped teeth with irregularly grooved and flattened base. The base is embedded tightly into their beveled jaw. 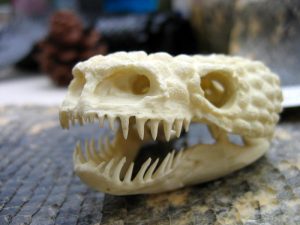 Eyes: They have small, beady eyes and do not possess good eyesight. 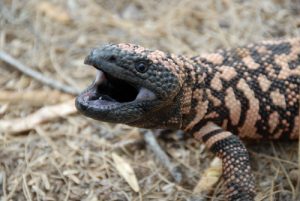 Tail: Their short, fat tails have a narrow, pointed tip.

They typically live in oak woodland, succulent desert, and scrublands. These reptiles do not like to stay in open areas, seeking shelter in thickets, burrows, and under rocks located in moist regions. 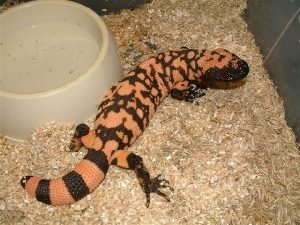 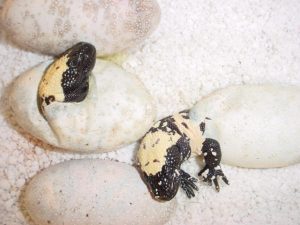 The diet of this carnivorous reptile mainly comprise of small birds, lizards, frogs, mammals, and insects. Reptile and bird eggs are other principal constituents of its diet. They are also scavenger feeders, often feeding on carrion. The large preys are crushed to death, while the smaller ones are eaten alive, swallowed headfirst.

Capable of killing smaller animals with a single bite, the venom of the gila monsters is a mild neurotoxin, secreted from glands located in their lower jaw. They use their poisonous saliva to kill their prey as well as to fend off their potential predators. When the reptile bites, the little grooves in their teeth help spread the venom into the injury. It has an extremely strong bite, holding on painfully and stubbornly for several seconds. To inflict a deeper wound and transmit more venom, the lizard may chew as well. 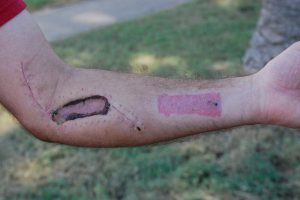 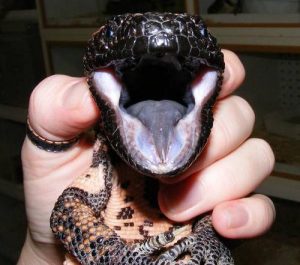 Gila monsters mate in the early summer months after coming out of hibernation. The courtship is initiated by the males as they flick their tongues and search the scent of the females. Copulation usually lasts for 15-150 minutes. The females then dig about 5 inches deep holes in the ground to lay a clutch of 2-13 large, oval, leathery eggs, leaving them buried to be hatched. The incubation takes place with sun’s heat. The eggs are around 6.3 cm (2.5 inches) long and 3.2 cm (1.24 inches) wide, weighing about 40 g (1.4 oz). Once the eggs are laid, the adults remain in underground burrows to avoid the summer heat. 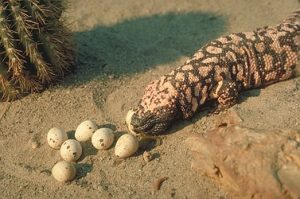 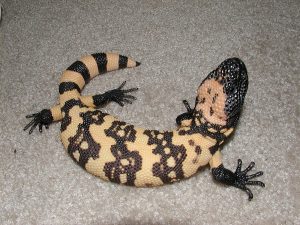 After nine months of incubation, the baby gila monsters emerge and move slowly on the surface. Upon hatching, the babies measure about 16 centimeters (6.3 inches) in length and they can even bite or inject venom. The young lizards usually have larger pink/yellow/orange bands as compared to the adults. Juvenile gila monsters achieve sexual maturity at 3-5 years.

In the wild, gila monsters may survive for 20 years, while in captivity, they manage to live up to 30 years. 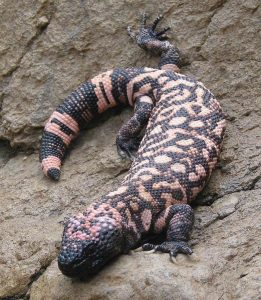 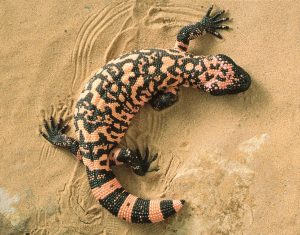 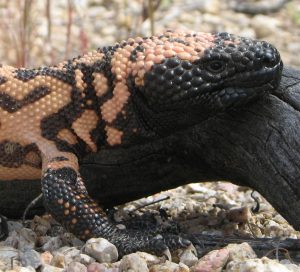 Gila monsters do not have a good reputation as pets. However, their fascinating nature and behaviors make them a preferred choice for reptile enthusiasts. Being a legally protected species, special permits and licences are required to pet them in most states. To take proper care of them, the following points should be remembered:

Enclosure: The reptile should be kept in a moderately spacious enclosure having 3.5 sq ft of floor space. The gila monster must be provided with a proper thermal gradient, i.e. a cool location at one end, while a warm relaxing spot at the other. At the warm end, the temperature should be 85°F-90°F, and at the cool end, it should be about 70°F. To prevent it from escaping, the cage should have a screen lid.

Food: Non-breeding females and adult males are usually fed every 2 weeks. During the breeding season, the females are fed twice a week. Water should be kept in a large container that is not easy to overturn.

Cage Care: The cage must be maintained regularly. Spot cleaning has to be performed frequently, especially after meals. Any liquid spills should be cleaned instantly. Any cage décor and dishes kept in their cage should be disinfected weekly.

Handling: Wearing a pair of top quality, thick gloves is recommended for proper caution while handling them. Although the lizard rarely bites humans and large animals, its bite may cause the victim to experience weakness, pain, quick fall in blood pressure, and edema. The victim should be taken to the nearest healthcare center and treated under a doctor’s guidance. 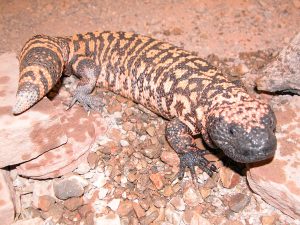 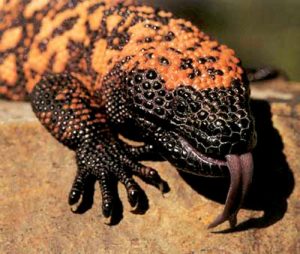 It is categorized as a “Near Threatened” species by the IUCN. The Endangered Species Act of USA has listed the species as “Threatened”.

One response to “Gila Monster”