The Carolina Wren is a species of American birds, spread across a large part of the US. These little birds are the largest of the wrens found in the USA, and play an important role in the eco-system. The Carolina Wren extensively affects the populations of the insects and spiders they eat, and compete with other bird species that nest in holes and cavities. Always busy and curious of their surroundings, it is fun for bird lovers watching these songbirds and their activities. 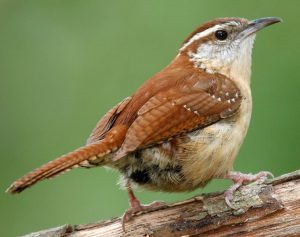 Plumage/Feather Colors: Little or no visible sexual dimorphism. Both the males and the females are bright reddish-brown above and a warm caramel orange below, devoid of patterns.

Tail: Long brownish orange tail protruding out of the body that often goes up and down during different activities.

Feet: Feet are long and adapted to grip branches of trees like most other species of wrens.

Head: The head is large with a very small neck, white chin and throat, with small nostrils just above the beaks.

Bills/Beaks: Dark bill. The long, distinctive shape of the bill acts as an identification for the wrens.

The average lifespan of the C. wren is 6 years in the wild. 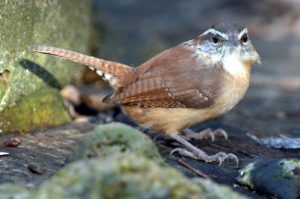 All the year round, the C. wrens inhabits parts of the USA that spread from the sea lines of the Atlantic, to the far western parts including Kansas, Nebraska, Texas, and eastern Oklahoma. In the northern part of the United States, they are found in southern Michigan, Ontario Canada, Massachusetts, and New York. They are also distributed in Mexico’s northeastern corner, in the Yucatan Peninsula, as also, a few locations in Central America.

Habitat: Where do Carolina Wrens live

These birds commonly explore woodpiles, yards, garages, as well as frequenting the vegetated habitats such as cypress swamps in the lowlands, brushy thickets, bottomland woods, and ravines covered with the greeneries of hemlock and rhododendron. Places like the shrubby areas inhabited by humans, dense farmlands, wooded residential areas, suburban parks and yards, artificial birdhouses, and decayed structures are also their favorites. 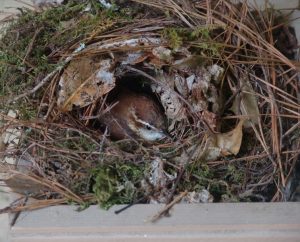 Depending upon their region of distribution, the following are the recognized subspecies of the Carolina Wren: 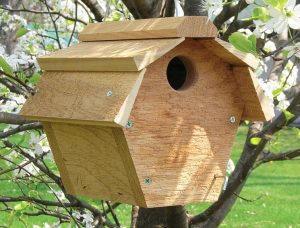 Carolina Wrens are territorial and would defend their own territories throughout the year. They are often seen rebuking the intruders aggressively and chasing them off from their territory. These wrens guard their territory together with their breeding mate, and would mostly use their calls and songs in order to advertise their presence in the territory they have occupied. Even when predators would approach near to their nests, the C. wrens would start emitting alarm calls, or would chase after the predator, and sometimes even pecking at it. They would usually be seen hopping around the areas of vegetation, while they would hastily move up and down the tree trunks, barks, branches, tangles, foliage, and the ground in search of fruits and insects. 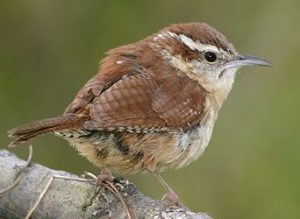 These birds do not migrate and would stay in the same area throughout the year. They are diurnal, and are active all day foraging in pairs. They would also visit manmade bird feeders dummy nest to feed on nuts, mealworms, suet, etc. These birds are specifically terrestrial, and would spend most of their time close to the ground. They can at times move with short and erratic flights at an incredibly high speed, but they rarely fly far. They can hitch themselves up the trees while feeding or nestling, and are also capable of using their small wings to help them leap over piles of debris or stumps of trees. 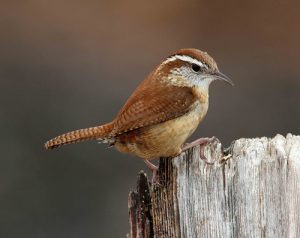 Carolina wrens can be found preening in a wide variety of settings, including open tree branches. They utilize their bills and wings to preen, and have also been observed bathing in the dust as a part of their preening process. Preening is often accompanied by sun-bathing. These little birds use their bills and wings to preen themselves sitting atop branches of trees, or other places. It has also been observed that, they would take a sun bath soon after they finish preening.

Carolina wrens are mostly terrestrial. They are ground foragers, spending most of their time hopping around on the ground. The wrens communicate with each other by songs and calls, as also using body signals. For example, they would threaten another wren intruding inside their territory by holding their wings out, fanning the tail and pointing the beaks at the intruder. While foraging, they usually cock their tails upward and hold downward when singing. 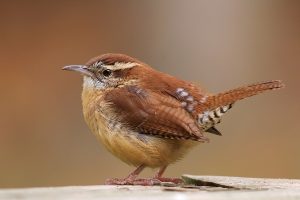 These are songbirds, and would sing throughout the year, along with its mate. They only chirp during daytime, provided the weather is not harsh. Generally, the voice of their songs range between 3 and 5 times in repetition, but a single note of the male CW can be repeated up to 12-15 times. A few of their general vocalizations have been transcribed as cheery-cheery-cheery, teakettle-teakettle-teakettle, etc.
You can hear the different songs and calls of the Carolina Wren here.

Diet: What Do Carolina Wrens Eat

The Carolina wrens are primarily carnivores, and usually live upon insects and spiders. Food items like moths, stick bugs, caterpillars, beetles, grasshoppers, leafhoppers, cockroaches and crickets are their favorite foods. However, occasionally, they would also feast upon frogs, lizards, or snakes, as also herbivorous items like plant matter in a small amount. They also consume seeds of poison ivy, bayberry, sweet gum, nuts and fruit pulps. 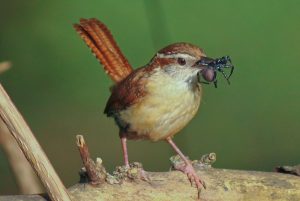 The Carolina wrens are monogamous and may mate for many years, or even life. The couples would spend time together year round, building nest, guarding territories singing in duets. Generally, they build their nest less than 10 feet from the ground. They would build their nests in any kind of holes including natural cavities in stumps and trees, deserted woodpecker crevices, hollows among roots of fallen trees, and even in dummy nest boxes, hanging baskets, door wreaths, cracks in buildings, tank lids, in garage shelves, and other artificial sites. Nest is made of weeds, leaves, twigs, lined with softer materials like feathers, grass, animal hair, moss. The nest is usually a bulky mass with a dome shape, having an entrance on the side. Both the sexes help in building the nest, while the female wren adds most of the inner linings. 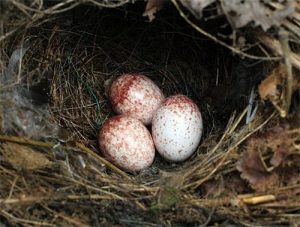 Carolina wrens breed between March and October. Before mating, the male bird would make courtship displays. It would dance around the female, or sometimes bring her food to attract her. This is known as courtship feeding. The nestling period of these birds is 10-16 days. At a time, they lay around 4-8 eggs in a single clutch, with the eggs being 1.7–2.1 cm long. The eggs are white – cream – pinkish white, having blotches in brown that is denser towards the larger end. It is only the female bird that incubates the eggs, and the incubation period is 12-16 days. During this period, the male bird often feeds the female.

These active birds raise 2 broods each year, however, the southern population sometimes raise up to 3 broods. After the young birds are born, both the father and the mother would bring food for the juveniles. The nestlings are born with their eyes closed, covered with pale grayish down. The baby birds would be able to leave their nest by about 12-14 days from hatching. They become independent within 1 month, while they attain the age of sexual maturity by 1 year. 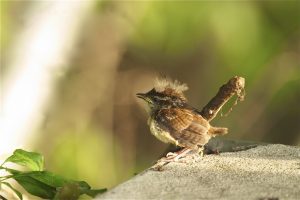 The most common predators of the adult Carolina wren are the larger birds like blue jay, Cooper’s hawk and sharp-shinned hawk. Their eggs and fledglings are also consumed eaten by many reptiles, mammals and rodents sharing their habitats in common, including gray squirrels, eastern chipmunks, minks, gray foxes, black rat snakes, and raccoons.

The Carolina Wren is not a threatened species. The IUCN 3.1 has categorized them under the ‘LC’ (Least Concern) species list. 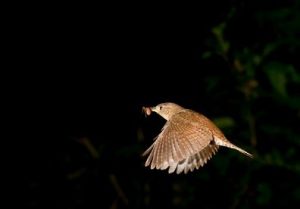 One response to “Carolina Wren”