The Cactus Wren is nothing less than a true desert bird. This bird is native to the Southwestern deserts in United States and also Mexico.

It belongs to the wren family of birds. This bird is by far the largest wren in North America.

It is brilliant how these birds are so accustomed to the desert environments; so much so that they can even survive without free standing water.

The Cactus Wren is bigger than its smaller relatives or other wrens. As such it is easy to spot this bird. Males and females are almost similar in appearance.

Size: This bird is recognized to be the largest North American wren. It is approximately 7.1-9.1 inches long.

Color: The upper part of the bird’s body is brownish and covered with innumerable white streaks. While it’s under part is white with dark and distinct spots. Its head is brown in color.

Eyes: One of the most distinctive features of this bird is the long white eye stripe above its eye. 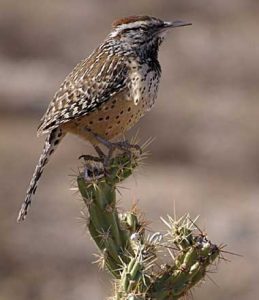 Bill: Typical to most wrens, the cactus wren also has a bill that is slightly curved.

Tail: Its brownish tail is also marked with prominent black stripes or bands. The tail feathers are spotted.

The Cactus Wren loves to feed on insects like grasshoppers, ants, ants and wasps. Its diet may also comprise of seeds, fruits and small reptiles at certain times.

This species is rarely observed using water from free standing water bodies or from anywhere else in that case. It derives water solely from the food that it consumes.

This bird is basically a ground forager. It usually forages from late morning. However in the hot summer afternoons the bird is not that active in foraging.There is also a tendency for the bird to could switch its activity to shady areas with a much cooler climate.

It is quite interesting to observe the intuitive side of this bird during its act of foraging. The Cactus Wren will not hesitate to overturn leaves and other objects using its curved bill, in order to capture insects hiding underneath.

This bird is familiar to the arid regions characterized by dry deserts and thorny vegetation including tree-like cactus plants and shrubs like saguaro, yucca etc. These desert plants serve to be an excellent nesting spot for the cactus wrens; more so as these thorny plants provide good foundational support for their bulky nests.

One may often spot the nests inside a hole in a saguaro or resting between the prickly spines of the cholla cacti plant.

This bird is native to the deserts of southwestern United States that happen to range from southern California, Nevada and Utah right up to central New Mexico and Texas, while extending southward to central Mexico. The Cactus Wren is also mostly found throughout the year in the deserts of Arizona.

The nest of the Cactus Wren is identified to be domed and bulky with a tunnel-shaped entrance. These birds build these nests using coarse grass and plant fibers. Several bits and pieces of discarded paper and cloth that these birds accumulate from roadside junk are also interwoven in their nests. The nest chamber is usually bordered with soft feathers. However the external substrate of the nest is usually kept thorny, in order to protect the eggs from predators like snakes and coachwhips.

These nests are often placed in tall, thorny cacti plants and shrubs like mesquite, yucca etc. It is the female who selects the site for the nest. The desert plants serve to be an excellent nesting spot for the cactus wrens; more so as these thorny plants provide good foundational support for their bulky nests. 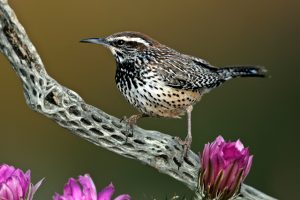 Moreover the male and female are equally involved in building the nest. It is also quite interesting to note how the bird builds more than one nest. Apart from the main nest, the other nests are used as roosts in the year long period. The roost nests are identified by the absence of feather lining in the chamber.

The breeding season is marked to begin from late February. These birds can have two to three broods in a single year. Each clutch consists of around 3 – 4 eggs. The eggs of the Cactus Wren are somewhat pinkish in color and are covered with brown spots all over.

The young hatch in a period of 16 days. In the next 19-23 days the young ones are ready to take their first flight. However they tend to be dependent on their parents for food etc. for almost a month even after they leave the nest.

The call of this bird is recognized to be loud and harsh with notes that sound somewhat like a “char”  sound. Moreover the call tends to get higher pitched and loud as it continues.

This bird is a ground forager. As such it searches food in the lowly shrubs and in the grounds.

It is not unusual for these birds to overturn leaves and other objects to hunt for insects that may be hiding beneath it. They are also spotted exploring certain rock crevices in search of food.

Another interesting behavior observed in these birds is the manner in which they form pair bonds that is permanent throughout. A particular pair will together, defend and protect their territory where they will live for the rest of the year.

This bird is superbly adapted to the environment of the desert. The Cactus Wren is a xerophile; it rarely drinks water from pools or any such water resources. This bird derives the water content from the pulp of the cactus fruit.

The Cactus Wren destroys the nests and eggs of other birds, thereby lowering the breeding density of those birds.

The juvenile wrens often fall victim to predators like the Blue Jay and snakes.

The adult birds are rarely preyed upon by other species.

Cactus Wren can live for a maximum period of 2 – 4 years.

The Cactus Wren is not an endangered species.

Enlisted below are some awesome pictures of the Cactus Wren. 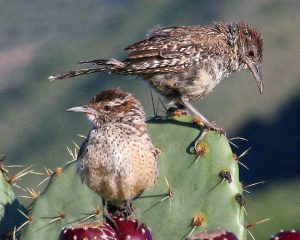 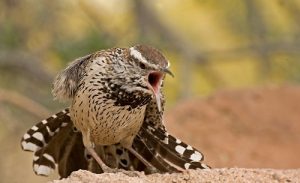