The California Sea Lion is a sea lion found on the west coast of North America. They are highly intelligent creatures and can adapt easily to man-made surroundings. They are frequently displayed in zoos and entertainment venues.

Weight: The males weigh around 200 to 400 kilograms at maturity and the females are around 50 and 110 kilograms.

Body Shape: The body of a California sea lion is tapered at either ends, giving them a sleek, streamlined, fusiform shape.

Coloration: The color of a California sea lion’s coat may vary. Normally the adult males have chocolate brown fur. The young males and adult females are tan and the pups have a dark chocolate brown coloration. The pups are noticeably much darker compared to the adults.

Generally California sea lions have a dark brown or black appearance when they are wet. When dry, they have a light, golden brown shade. 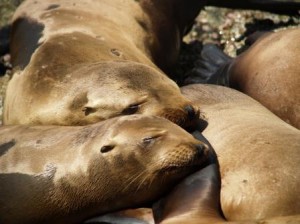 Hind flippers: The California sea lions have got five digits in each of their hind limbs which are extended by cartilaginous extensions. The middle three digits have noticeable nails which they use for grooming their fur.

California sea lions can rotate their hind flippers underneath their pelvic girdles when they are on land. This enables them to support their body weight and walk on all the four limbs. They use the hind limbs to steer while swimming in water.

Ear flaps: They have noticeable ear flaps or pinnae on both sides of their heads.

Whiskers: There are around 20 to 30 whiskers or vibrissae on both sides of the muzzle, which totals to almost 40 to 60.

Teeth: They have almost 34 to 38 teeth which include smaller incisors, four huge canine teeth and cone-shaped cheek teeth. The teeth are ideally built for grasping and tearing and not for chewing food. These sea lions shed their milk teeth (deciduous teeth) before birth.

Forehead: The adult males have got a raised forehead. This portion of the skull is termed the sagittal or cranial crest. When the males are around ten years old, their cranial crest reach up to 4 cm, which is its full size. The females have a smoother, lower forehead.

Hair: The bodies of California sea lions are covered by a coat of guard hairs that are lined with shorter fine underhairs. The glands beneath the skin secrete an oily substance that covers the skin like a thin film providing protection to the coat. These sea lions molt or shed their hair once annually.

California Sea Lions are extremely playful and gregarious creatures. Juvenile sea lions will often chase, push or shove each other as well as practice territorial behavior. They like to sunbathe on land forming large clusters or groups. Individual sea lions even lie on top of other sea lions. They also form small groups when they choose to swim in water. They are slow to react to sudden noises. The males tend to show aggressive territorial behavior during the mating season. The males are protective of their territories but if a female desires to leave the group, the male will allow her to go. They commonly possess a friendly attitude towards each other and maintain generous relations with other species such as harbor seals, northern elephant seals and northern fur seals. However, California sea lions juveniles and pups may briefly chase or snap at gulls. California sea lions communicate using their vocal chords and make barks, growls and grunting noises to relate to each other.

California sea lions use their sensitive vibrissae to locate food. While eating, they either swallow their whole food or tear it into small pieces. However, they are not in the habit of chewing their food. Adult California sea lions consume almost 5% to 8% of their body weight in their daily intake of food. Their diet mostly consists of sea food such as fishes, squids and clams. Commonly eaten species of fishes and squids include hake, salmon, anchovies, Pacific whiting, herring, rock fish, schooling fish, dog fish, lampreys, octopuses and opalescent inshore squids.

California sea lions are found in various locations on the western coastal regions of North America such as California, Alaska Panhandle, Baja California peninsula, Cedros Island, Gulf of California, the Channel Islands and the Isla Ángel de la Guarda/Tiburón Island region. During the breeding months, they migrate towards the southern territories. 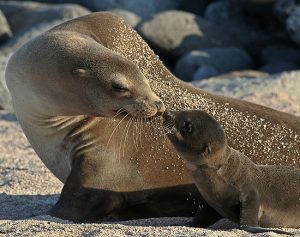 California sea lions mostly inhabit the sandy and rocky beaches of mainland shorelines and coastal islands. They are frequently found in sandbars, tide pools, sheltered coves and in various structures such as jetties, piers and buoys.

The main predators of California sea lions are the white sharks and killer whales.

California sea lions have developed certain adaptations that help them to survive on water as well as escape predation. These adaptations have been discussed below:

The California sea lions breed every year during the months of May and June.

California Sea Lions become capable of reproduction when they are around four or five years of age. However, they may not mate successfully until they are about nine years old. They return to the same region of the beach year after year to mate. The males often fight among each other for females. A male can have around 16 female companions. The females initiate the courtship ritual by sitting in submissive positions in front of their male companions. Courtship and copulation activities can last for only a few minutes as well as go on for a few hours.  Copulation ends when the female bites the male’s neck.

The female gestation period lasts for about 11 to 11.5 months. The pups are mostly born in June. The females normally give birth to a single pup in one year. Giving birth always occurs on land. The process of pupping or giving birth may last for a few minutes or may stretch up to an hour. Most of the newborns are delivered head-first. The pups are almost 30 inches in length and weigh about 6 kilograms. As soon as the pup is born, a mother-pup bond is established by mutual vocalization and instinctive communication. They have a black or dark brown hair covering which they molt twice within the first six months. The young pups are already well developed when they are born. They have their eyes open at birth and can vocalize. Within half an hour after birth they are also able to shake, scratch, groom and walk. They can even swim at this tender age. The females nurse the young ones for nearly a year, although often yearlings are also nursed. The mothers leave the young pups to fend for themselves slowly and steadily as they grow up. The pups tend to maintain close association with their mothers even after attaining maturity.

The average life span of California Sea Lions in the wild varies between 15 to 25 years. In captivity, they have been known to live as long as 30 or more years.

The California sea lion has been listed under the category of “Least Concern” by the IUCN.

Here are a few interesting facts about the California Sea Lions:

Here are some images of these playful California Sea Lions. 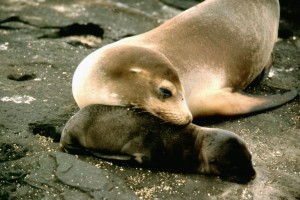 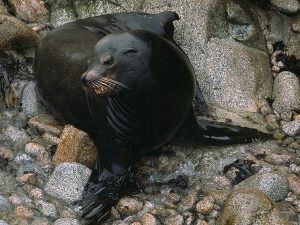 The California Sea Lions are a species of intelligent, fun loving animals. They are also quite friendly in their interaction with humans as well as some other animal species. Their fun filled antics make them popular among circus goers and tourists.

One response to “California Sea Lion”