Pacific White Sided Dolphins are charming and energetic dolphins with playful spirit. They are distinguished by the bold colors of black, white and grey.

Pacific White Sided Dolphin has short and a well defined beak. Each jaw consists of 21-28 pairs of small and cone-shaped teeth. They have a conical shaped head. 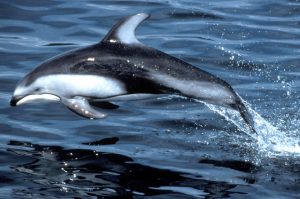 The pacific white sided dolphin has an attractive body pattern. They have a cream belly, chin and throat. They are black on the top, their sides, flippers and dorsal fins are grey with a white belly.

The average size of a male dolphin would be 2.5 meters and females would be 2.3 meters in length.

The dorsal fin of the Pacific White Sided Dolphins is tall and sharp. The posterior portion of the fin is grey and the leading edge is black.

Pacific White Sided Dolphins are social animal. They usually form a school of 5 to 100s of them, including all ages, gender and even other species. While swimming, they stay close and swim in a line. While feeding too they divide themselves in a sub-group of 10-20 individuals. Gregarious and athletic, they are aerobatic swimmers. They can leap and perform somersaults in the air and are always in a playful spirit.

They use echolocation to find their prey by sending high frequency sound across. Those click rebounds and the dolphin picks up those frequencies enabling them to detect the object’s distance, shape and size.

Pacific White Sided Dolphins are found in the cool and temperate waters of the North Pacific region.

They range from Bering Sea to Southern Japan in Western Pacific Ocean and Gulf of Alaska to Gulf of California in Eastern Pacific Ocean. They follow migratory pattern hence are found in California shore during winters and migrate towards north in Oregon, Washington during summer. Pacific White Sided Dolphins are abundant at latitude of 38 degree north to 47 degree north. 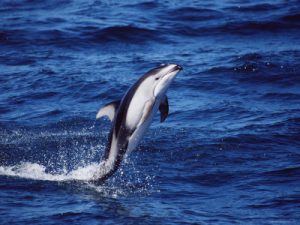 A female pacific white sided dolphin has an age span of 46 years and that of a male is 42 years.

Females become sexually mature at the age of 7-11 years and the males at the age of 9-12 years. The calving season starts from May till September. The gestation period is about 11-12 months. The female takes care of the calves for 8-10 months. They reproduce once in every 4 to 5 years.

Killer Whales and sharks are the major predators of Pacific White Sided Dolphins.

They adapt well in captivity and have not been reported to be aggressive at all. North America and Japan has almost 50 of them in dolphinariums.

It is illegal to hunt down pacific white sided dolphins however it is legal in Japan. At times they are harmed by incidental catch in gillnets and trawls. They are sometimes harmed by harpooning in Japan.

Here are some of the awesome images of Pacific White Sided Dolphin: 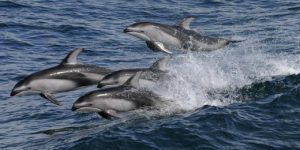 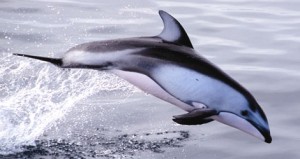