The Amazon River Dolphin is a group of dolphins that primarily dwell in the South Americas waters, especially in the Amazon river. Also known as the ‘Pink River Dolphin’ or the ‘Boto’, they are not to be confused with the marine pink dolphins. This water mammal is the largest of all the other river dolphin species, and cannot survive in salt water. It is a very distant relative to the sea dolphin, and has a pink to pinkish-grey pigmentation on their bodies, which is one of their primary characteristics, giving them a very unique appearance (and hence their name). The Boto is the only river dolphin that is kept in captivity, mostly in the USA, Venezuela and Europe. However, the rate of mortality is high amongst the captive specimens. 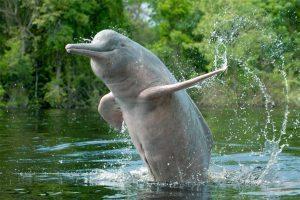 Size: Length of the adult dolphins varies between 2 and 3 meters.

Skin Color: Color is dependent on their age. While the baby Amazon river dolphins have a dark gray dorsal side, the ventral side is lighter gray. With maturity, the flanks and the ventral side begins turning pink. Pink is predominant in the males. Their colors fade gradually with age, having blue-gray and white tinges all over.

Eyes: Small round eyes but with a strong eyesight.

Beaks: The beaks are pretty long with a strong built adapted to capture prey.

Teeth: The jawline is made of a combination of 24-34 conical and molar-like teeth.

Fins: All fins are same like other dolphins except that they don’t have dorsal fins, but instead, has a hump on the back that gets larger with age.

In the wild, the average life expectancy of these animals is only 33 months. However, in captivity, they have been recorded to have lived between 10 and 30 years.

Pink dolphins primarily inhabit the Amazon River in South America, but their range extends to the basins of the Orinoco and the upper Madeira River as well.

Botos are generally concentrated below the confluences of the channels. They dwell in the fast flowing, whitewater, clearwater or blackwater rivers of the lowlands. But they are strictly freshwater mammals. They are also found in the lakes, the largest tributaries of the rivers, and seasonally in the flooded rainforests. 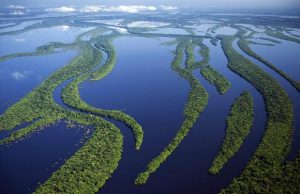 Depending upon their ranges, the dolphins have been classified into the following: 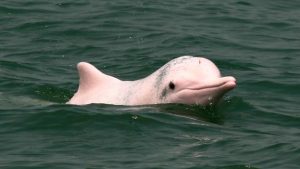 The Amazon River Dolphins are social and friendly creatures, living since centuries in the Amazon and its tributaries. Usually seen roaming alone, or in pairs during the mating season, these dolphins would hover in groups of 10 to 15 when there is an abundance of prey. Like most other species, these dolphins sleep with one eye open.

Typically, these creatures are slow swimmers, and are primarily diurnal. They are mostly active early in the morning, until late afternoon. They breathe at a shallow angle, displaying their dorsal fins, the beak and the melon all at a time.

Like many other species, the botos are seldom seen leaping above the water surface. However, the Amazon River dolphins are often seen swimming upside down, though the reason is uncertain. It is thought that, the fleshy cheeks of these dolphins act as an obstruction to their bottom vision, for which they tend to turn upside down to get a vision downwards. 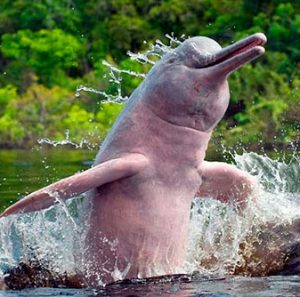 Their diet primarily consists of fish, and they depend on healthy fish populations for their survival, feasting upon over 50 types of fish. They also consume shellfish, crabs, crustaceans, and even small turtles.

Apart from emitting the sonar (inaudible to humans), these Amazonian dolphins use whistling tones for communication. Researchers say that, this sound has some connection to food. Research has also revealed that, these vocalizations are different in structure to the typical whistles of other dolphin species. 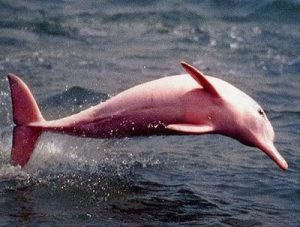 Before mating, the adult males carry objects like branches, floating vegetation, or hardened clay balls in their mouths to the females to propose for mating. Sexual dimorphism is evident in these creatures, with the males weighing and measuring between 16% and 55% more than females.

Courtship and mating foreplay have also been recorded with the male nibbling the female’s fins. However, if the female is not receptive, the male would react aggressive. The frequency of intercourse in a couple is high, and they have been observed to use at least three different sex positions – lying head to head, lying head to tail, and contacting the womb at right angles. 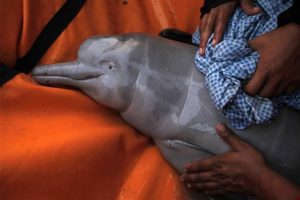 The boto dolphins breed seasonally, giving birth to the pups between the summer months of May and June. The season of giving birth to the young ones coincide with the flooding season, providing an advantage to the female and its babies. While they stay in the flooded regions longer than the males, until the water level goes down. These areas have enough sources of food to provide the juveniles with enough nutrition they require for growth.

The gestation period lasts for about 11 months to 1 year, and in captivity, the birth takes around 4 to 5 hours. During birth, the size (length) of the calf is around 31 inches, with the lactation taking about 1 complete year. The females can again develop offspring after 15 to 36 months. It takes almost 2 to 3 years for the baby dolphins to be adult and independent.

The calves are born between July and September. The period of breastfeeding is relatively long in these mammals, which in turn shows a strong bond between the child and the mother. Also, during this time, the babies learn from the parents and are developed by their care and attention. While the male dolphins attain the age of sexual maturity when they attain the length of about 2 meters, the females sexually mature at about 1.7 meters. 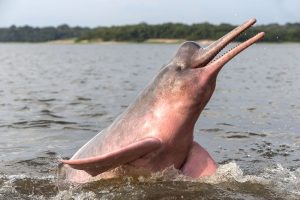 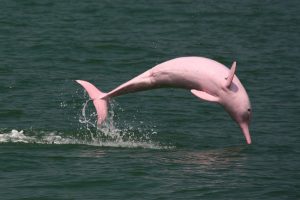 The petroleum industry in the Amazon and Orinoco basins pose a threat to the dolphins by means of polluting the aquatic ecosystem where the species is found. In Colombia, the oil pipelines have been blown up by armed groups, causing irreparable pollution.

The raise in contaminant levels of mercury have also caused and increased the total number of recorded deaths among these mammals, especially close to the gold mines, where mercury is used in the process for mining gold.

These dolphins have few natural predators, but at times, they are hunted down by anacondas, jaguars and caimans. They are also attacked by humans for their skin for leather and for their fat for cooking (and also for leather). They are also caught to be kept captive in aquariums.

They have not yet been officially declared as threatened or endangered. Because of insufficient data, the IUCN 3.1 has categorized it under their ‘Data Deficient’ list. 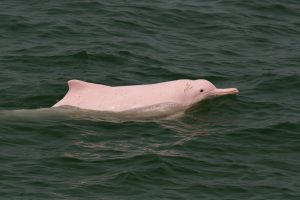 One response to “Amazon River Dolphin”